Every day for the next two weeks we’re showcasing the winners of this year’s Effective Mobile Marketing Awards. Three more for you today…

The award for Most Effective Native Advertising Campaign went to Radox, Rovio, Venatus Media and Mindshare for the Radox/Rovio Casual Gaming Partnership. It may surprise some to learn that the UK’s main gaming demographic is women aged 25-44. This is a perfect match for Unilever brand Radox’s target audience, so when the brand was looking to raise awareness of the a new Radox shower gel called Scent Touch ahead of launch, it decided that a gaming partnership could play a useful role.

The branded level allowed players to engage with the classic Angry Birds slingshot game mechanic to throw birds at Radox bottles, which were arranged on the game’s scaffolding target alongside the green pigs.

One of the key features of the new product is ‘touch-on-release’ technology to trigger longer-lasting scent, so integrating the brand in a game that requires the player to touch a mobile screen to release Angry Birds and interact with the product and fragrance ingredients emphasised Radox’s tagline and USP. The game mechanic also emphasised the idea of treat time, as it connected the brand with an audience during a period of highly-focused leisure time.

Brand messaging and product visuals were integrated into key parts of the game, including information interstitials with a Radox-branded background; product packaging arranged on the game’s scaffolding alongside the pigs; and key scent ingredients, including coconuts and blueberries, floating above the scaffolding in bubbles.

The campaign delivery was optimised by targeting key demographics and up-weighting times when they were more likely to be playing the game, for example during commuting and meal times.

The game integration surpassed all Unilever’s brand objectives and delivered an incredible level of user engagement with the brand and awareness of the ‘released on touch’ brand message. The campaign generated more than 3m game starts, with 2.3m completed plays of the branded level. It reached 2.5m unique users, and almost 4 per cent of players clicked through to the product website. Venatus also ran a brand study that recorded a 66 per cent brand uplift between pre- and post-exposure to the game.

The judges said: “This was a very clever integration of branded materials into a game, which delivered excellent results for the client. It was also good to see a campaign that recognised that women are a major mobile gaming audience and leveraged that fact.” 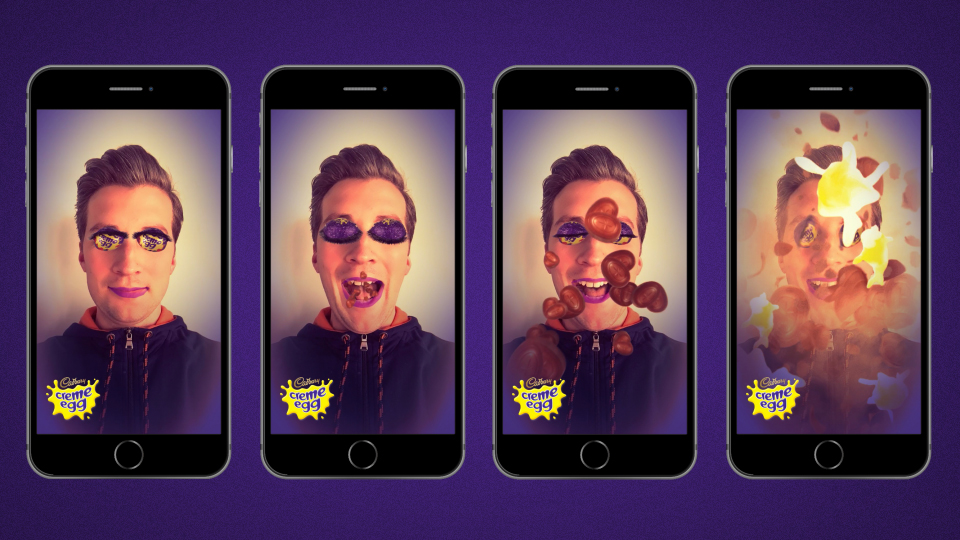 Mondelez and Elvis Communications took the honours in the In-app Advertising category for their Cadbury Creme Egg 2016 - Snapchat Lens campaign.

As a brand, Cadbury buys into Byron Sharp’s ‘Laws of Growth’ philosophy. Two key principles of this seminal piece of research are that brands grow by increasing their penetration, and that in order to do this, they must increase mental (and physical) availability. Translated into communications objectives, this means that a brand’s work must always prioritise reach, but in order for that reach to be effective at driving mental availability, it needs to resonate with its audience. So for this campaign Cadbury’s key objectives were reach among its target audience, and engagement.

In short, Mondelez and Elvis wanted to encourage Creme Egg’s core 16-34 year old target audience – one that is notoriously hard to reach - to spend more time with the brand. Mondelez and Elvis created the confectionery category’s first-ever sponsored Snapchat lens, giving chocolate lovers the chance to give their selfies an animated Creme Egg twist.

Users playing with the lens saw their eyes turn into Creme Eggs. Creme Egg hearts poured out of their mouths when they opened them wide and then exploded into a gooey Crème Egg mess running down their phone’s screen.

The lens ran for 24 hours on the channel, on 12 March, priming people for Creme Egg’s pre-Easter sales push. On that one day, the campaign reached half of all people on Snapchat in the UK (including 26 per cent of the brand’s whole target audience). The lens was used an incredible 14.4m times, with an average of three uses per user, and the average interaction lasting 24 seconds.

The campaign also generated a large amount of organic PR, and at a time where social influencers are being rewarded handsomely by brands to promote their products, Zoella, the original social influencer, shared the lens with all her Snapchat followers, completely unprompted.

The judges said: “This is a very solid piece of work, engaging with the brand’s target audience in an entertaining and memorable manner. The number of times the lens was used, and the average dwell time in the activity, point to a highly successful campaign that surpassed all its objectives.”

Most Effective Programmatic Campaign
Subway France, S4M, MediaCom and Lokall picked up this award for their You’re The Chef campaign. The campaign also took home the awards for Most Effective Brand Campaign and the Grand Prix Award for best campaign overall.

In a highly competitive market, the sandwich chain wanted to reach users on-the-go and drive them to restaurants with a personalised creative displaying the distance to a nearest Subway restaurant. The campaign also targeted mobile users in the vicinities of four different Subway competitors around France to redirect these consumers to a nearby Subway instead.

To evaluate campaign success, Subway created two groups of user IDs, a control group and an exposed group. The campaign leveraged mobile programmatic targeting to reach hyper-precise audiences with an initial objective of 200,000 visits to restaurants across the country.

To create a fast food consumer audience cluster, Subway and its agencies identified and grouped smartphone IDs using historic and behavioural user. Then, 30 days prior to the campaign, they collected anonymous device IDs at restaurant locations of four different competitors around France. These device IDs were divided into two groups, a control group and an exposed group.

During the campaign, only users in the fast food audience cluster and the exposed group of IDs saw the campaign if they were within 400 meters of a Subway restaurant or one of the selected four competitor restaurants. Converted users could click on the call-to-action that led them into the native map application in their mobile with a store locator and travel itinerary.

There were other factors that impressed the judges. Firstly, before the video element of the creative was played, there was a three second countdown, allowing users to exit the ad if they wished. And to ensure the most relevant users saw the campaign and to optimize media budget, fast-food consumers were targeted only during lunch (11:30am to 3pm) and dinner (6:30pm to 10pm). The campaign also applied a frequency cap of three times for each user to avoid bombarding users with the ad countless times.

The campaign exceeded its objectives, generating 262,160 visits to Subway restaurants within 30 days. When comparing the total users exposed to the campaign versus users not exposed, the results showed an impressive 46.72 per cent uplift of visits to Subway restaurants across France. The campaign targeting competitors’ outlets saw almost 40 per cent of smartphone users redirected to the nearest Subway from one of the outlets.

The judges said: “This campaign employed brilliant use of data, targeting and timing to drive results. A meaningful metric in terms of cost per landing page and phenomenal brand switching.”

Deezer and Adotmob took home a Highly Commended award in this category for their Deezer Chatbot campaign. This used rich media ads to take users through to a chatbot conversation to gauge their current mood and musical tastes to get them try out Deezer’s Flow personal music recommendation service.