Following our recent Effective Mobile Marketing Awards Ceremony, we continue our round-up of the winning campaign in each category with a look at the winners in the Most Effective Entertainment Campaign, Most Effective Retail/FMCG Campaign and Most Effective Brand Campaign Categories. 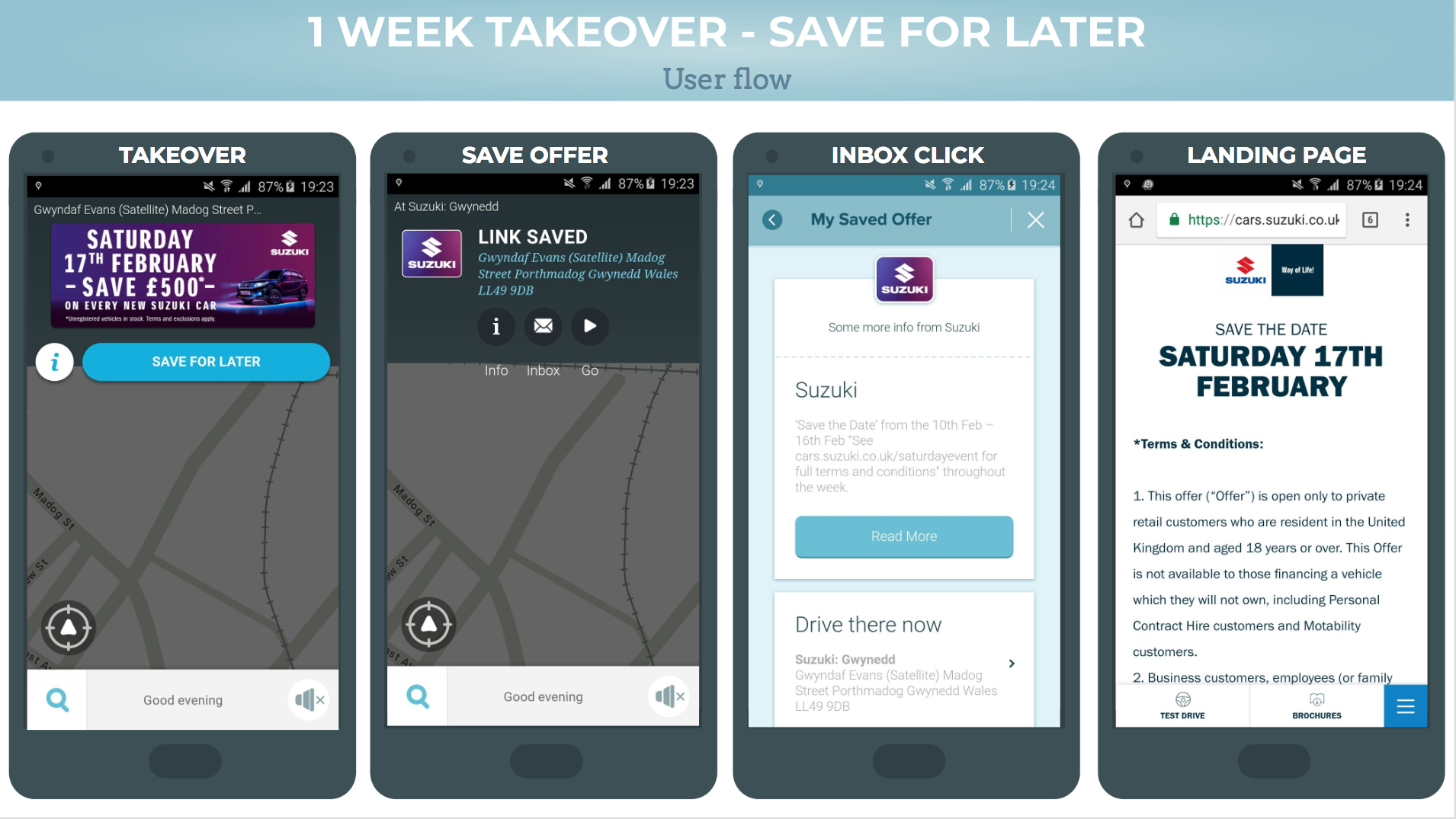 Suzuki Saturdays is a bi-annual push to get drivers into Suzuki showrooms with a money-off deal for a new vehicle, using location and contextual signals to target only drivers.

The campaign was aimed at reaching drivers using Waze – who spend 14 hours a month on average in their vehicles – at safe times behind the wheel using creative to build anticipation for the event. It had to make them aware where they could find their nearest Suzuki dealership and encourage them to take advantage of the £500 off deal.

Wazers travelling no more than 20km from a Suzuki dealer were targeted with a contextual message through three Zero-Speed Takeover creatives, which were staggered to remind them of when the event was coming up. In the week prior to the event, drivers were prompted to ‘Save for Later’ so they could learn more about the offer, before being prompted to learn about where their nearest showroom is located. The day before the event, a ‘Tomorrow Only’ message was delivered then, on the day of the event, a creative was used to tell users where the event was happening around them.

The campaign served 2.5m impressions, reaching 1m users, and 11,500 ad engagements. It drove 1,161 journeys to a Suzuki dealer – 340 of these drives to dealer coming on the event day from Waze. There was also a 300 per cent lift on drives versus the previous Saturday and 230 cars were sold on the day. Tremendous results and a deserved winner.

Judges’ View: “This was a targeted, contextual campaign to literally drive footfall into dealerships. A great idea, very well executed, and good to see such clarity in the results.”

Most Effective Charity Campaign or Solution
Global – Make Some Noise Competition Entry with Donation
Running a charitable competition through SMS has a number of necessary regulations, including the use of commercial shortcodes, which are subject to lower out payments, and thus a reduced amount that eventually goes to the charity. For its Make Some Noise charity drive, Global sought a way to avoid this while still taking advantage of the high engagement rate that SMS offers.

The solution was a free-to-enter competition with a voluntary donation attached to it that, rather than opting in to, those who entered could opt out of. After texting to enter the competition, respondents receive a message saying that unless they reply with a message saying ‘NOCHARITY’ in the next 60 minutes, a voluntary donation of £5 would be taken via carrier billing. Whilst some people do opt out, the majority are happy to donate to the good cause.

Global saw excellent results from this method, with 85 per cent of competitors remaining opted-in to the donation, resulting in £425 raised for every hundred entries. If a similar rate was achieved using shortcodes, only £350 would be raised due to the associated fees, demonstrating how tweaking the method of collection created a much more efficient way of collecting donations. A clever solution to a problem faced by any charity taking mobile donations.

Judges’ View: “A neat, and transparent, donation mechanic that makes it very simple for competition entrants to donate, or indeed to opt out of donating, and with great results.”

Go RVing is a coalition of manufacturers, component suppliers, dealers, and campgrounds. They aim to provide the public and media with general information about the benefits of RV travel and camping.

The coalition wanted to make RVing cool and mainstream, bringing the experience to younger audiences. To make this happen, it Go RVing wanted to target two groups: people aged 30 to 49 with kids and people aged 25 to 39 who are thinking about or starting a family. Within these age groups, it was looking to meet people from a place of shared interest in things like travelling, road trips, being outdoors, spending time with family, camping, visiting national parks, outdoor activities, and sightseeing.

GumGum used its computer vision and image recognition technology to place Go RVing’s message within hyper-relevant content. This content was placed in contextually relevant environments where the target audience were primed for engagement and interest.

The campaign achieved a click-through rate which is 15 times higher than the industry standard and there was a view conversion rate of 31.8 per cent. Proof that computer vision and image tagging technology have a big role to play in digital marketing.

This category also featured a Highly Commended award, which went to American Airlines, Mobsta and Mediacom for their Brand Campaign for the airline, which targeted travellers in London black cabs using a moving geofence.

You can see details of all the winning entries here.

"Today, we are muted in solidarity with our community... #BlackOutTuesday https://t.co/S2Cxxcycy2"
17 hours ago
"We all know that the #Covid19 outbreak had a huge impact on the global markets... So we're bringing you another Mob… https://t.co/97FGWVbLRN"
1 day ago
"The clock is ticking... ⏱️ A quick reminder that Effective Mobile Marketing Awards 2020 is open for business, but t… https://t.co/OtojoV7wR2"
1 day ago