Ahead of our 2018 Effective Mobile Marketing Awards, we'll be previewing the nominees in each category, giving you a glimpse at the high quality of entries we've seen this year. Today, we move into a new dimension, with Most Effective Augmented Reality or Virtual Reality Campaign. 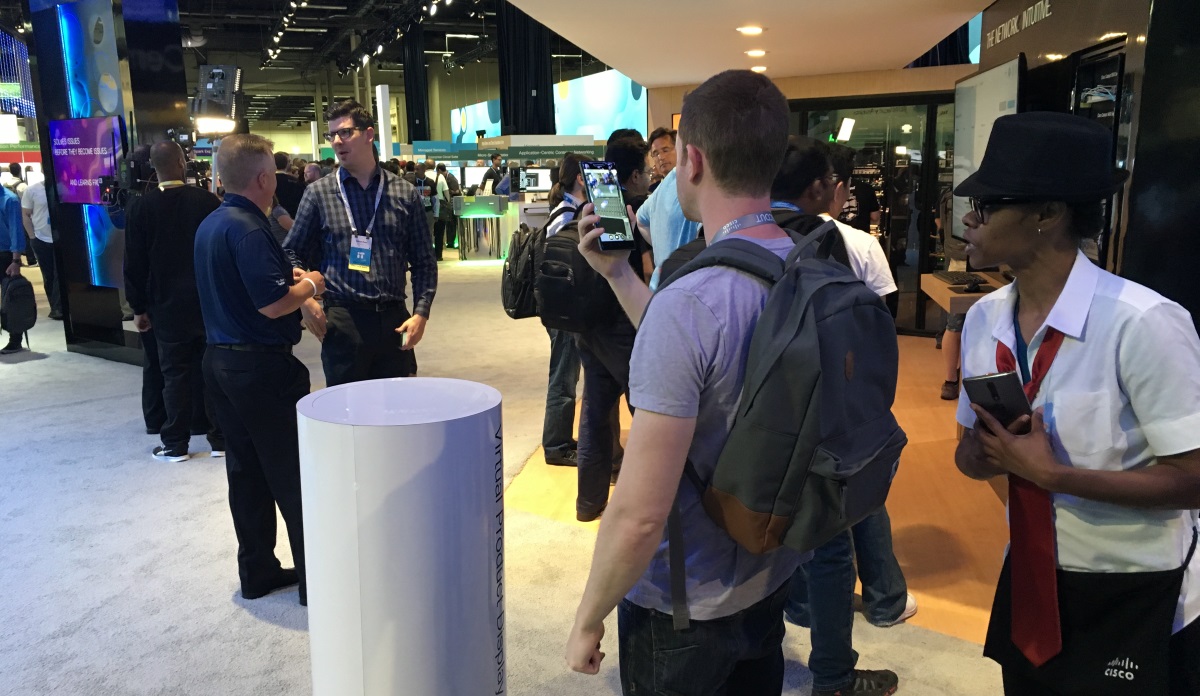 Cisco and Kaon Interactive – Cisco 3D Interactive Catalogue in AR at Cisco Live
Cisco Live US 2017, the company’s premier education and training event for IT professionals worldwide, drew more than 25,000 Cisco customers and partners together to network and experience hundreds of new solutions from Cisco. To demonstrate some of the newest marketing tools and help differentiate how the firm showed off its hardware, Cisco decided to adopt AR, with a B2B app that could provide more than 115 interactive 3D product tours.

Cisco had worked with Kaon Interactive since 2006 to develop the Cisco 3D Interactive Catalog, and when the Tango device was announced in March 2017, the firm began the work to convert its existing 3D catalogue to work with Tango and in augmented reality. Deployed at Cisco Live, the technology would serve to demonstrate Cisco’s commitment to innovation, drive interest and reduce costs, by eliminating the need to bring physical equipment to serve as examples.

The interactive catalogues proved a great success, driving a nine per cent increase in booth traffic year-on-year, as well as increases in both the duration of time spent at booth and customer interaction. The virtual catalogue reduced product shipping costs by 65 per cent, and the work carried out by Kaon and Cisco meant that the catalog was easily exported over to ARCore and updated to work in virtual reality, allowing booth visitors to explore the products using an Oculus Rift.

Kim Products and Midwest Immersive – Fashion Designer Snap AR Lens
Midwest Immersive wanted to test how Generation Z would react to Snap’s AR lenses by designing a lens for an experiential marketing campaign. The firm found the ideal subject when an intern at the company introduced marketers to Kim Products, a Chicago streetwear brand run by 17-year-old Kimisha Moxley. Midwest set out to brand Moxley’s winter collection launch party, creating an AR lens that would accompany the experience of the party.

To fit in with Kim Products’ winter line, the firm focused on creating a distinctive AR environment that would encourage people at the event to share images via Snapchat. As attendees arrived, they were presented with a Snapcode that enabled them to activate a unique Lens for 24 hours. After doing so, they could find items of early 2000s nostalgia floating around the party on their phone, ranging from spinning compact disks to boomboxes. In addition, if they recorded a video using the Lens, they’d hear an instrumental version of Missy Elliott’s ‘Work It’ playing in the background.

Despite the launch party only lasting four hours, the Snapcode was scanned almost 300 times, leading to almost 25,000 uses of the Lens. Moxley praised the way that AR was integrated into the party, saying “Snapchat is really big for kids my age. It’s the first thing everyone goes to. Midwest Immersive gave me a really great opportunity to have something that no one in Chicago has probably had before.” 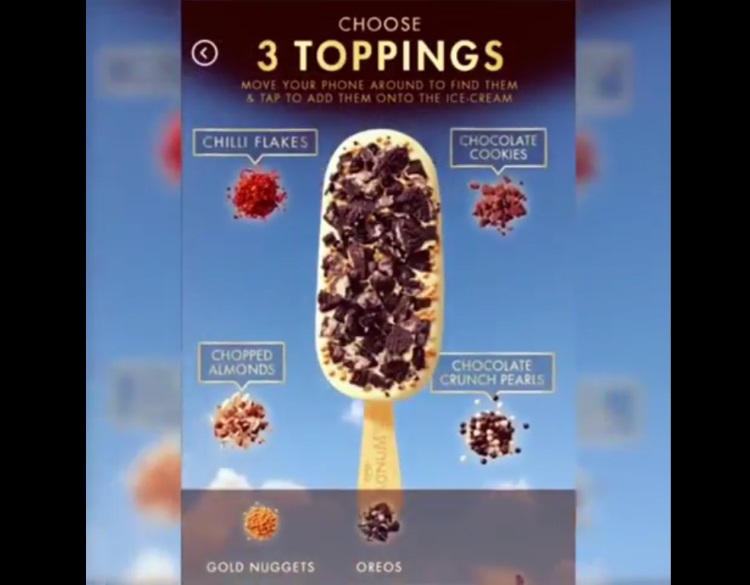 Magnum Singapore, Blippar and Mindshare – Make My Magnum Through Augmented Reality
The main objectives of this campaign were to generate awareness of, and drive footfall to, the Magnum Pleasure Store and deliver a compelling and shareable online experience. To do so, Magnum worked with Blippar to create a unique and immersive mobile ad campaign, harnessing the power of augmented reality (AR).
The experience leveraged the gyroscope of users’ smartphones to immerse them in Magnum’s different flavours in 180 degrees. Users looked up, down and side-to-side to reveal different coatings, toppings and drizzles, which were overlaid onto their own real world environment in AR. Once users had designed their own Magnum, with their own unique combination of flavours they could get directions to the Magnum Pleasure Store to buy it at a discount. And they could do all this without the need to download the Blippar AR app, as the experience was published to the web using Blippar’s AR ad unit. Users simply tapped on the Magnum mobile ad to launch the AR experience.
The campaign delivered excellent results for Magnum, dwarfing those typically produced by rich media ads. These were shared with the judges in confidence and were hugely impressive.

Takis and OmniVirt – Are You Takis Enough?
Snack brand Takis was looking to better reach its millennial audience, and needed a way to break through the clutter of content that millennials blindly scroll through. To do so, Takis turned to to new content mediums: 360° VR and 3D. By using immersive content, the brand hoped to better engage its millennial audience, and by working with OmniVirt, it was able to distribute its innovative campaign across the mobile web, rather than relying on its own website or app.

Working with Starcom, the team produced and distributed three immersive ad experiences across targeted websites: a 3D display ad, an interaction 360° game and a 360° Dance Battle video. Each experience centred around the high-energy brand tagline ‘Are You Takis Enough?’, and was distributed across mobile and desktop web inventory.

The campaign was still live at the time of submission, but had already seen strong uplifts in CTR and video completion rates, especially the 3D ad unit, which saw a 7.7 per cent engagement rate in July. The campaign has also allowed Takis to successfully engage its target millennial base in a way that isn’t just about capturing a second of their attention, but fully immersing its audience in a fun, innovative and engaging way.