Ahead of our 2019 Effective Mobile Marketing Awards, staged in partnership with our headline partner Dynata, and our partners DAX and TabMo, we'll be previewing the nominees in each category,giving you a glimpse at the high quality of entries we've seen this year. In today’s preview, we take a look at the campaigns up for our Most Effective Retail/FMCG Campaign or Solution Award. 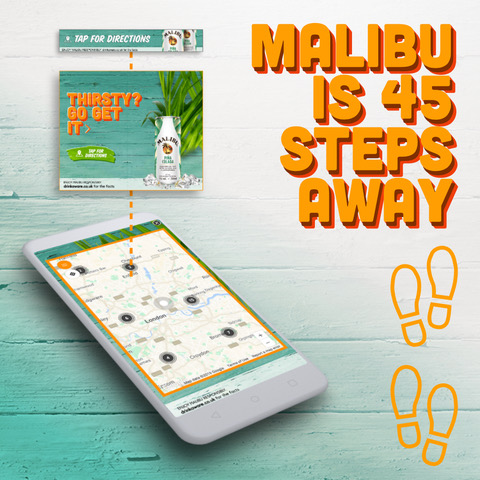 With this campaign, Pernod Ricard wanted to raise awareness of its new Malibu products (Passion Fruit 70cl & Pina Colada Can) launched in summer 2018, and increase sales by driving footfall to stores where they were stocked (Tesco, Sainsbury’s and Asda). The core target audience for Malibu was digitally-savvy females aged 18-34. Pernod Ricard turned to its mobile partner, TabMo, to deliver the campaign.

The campaign was planned by Pernod Ricard and Havas. TabMo produced the creatives and activated these with its mobile demand side platform (DSP) Hawk, which was used by Affiperf to execute the campaign. Data segments were provided by Adsquare, and this integration also enabled live footfall tracking. In addition to TabMo’s tracking capability, third party verification figures were provided by an IRI measurement study.

These segments were geo-targeted at a hyper-local level using TabMo’s mapping technology so that relevant users were only targeted with the relevant ad when they were in locations of high relevance (i.e. near a retailer stocking the products) and could therefore act on the ad. TabMo worked with the client and agency to map all relevant retailers, and was able to target around these stores. The self-service nature of TabMo’s platform enabled full transparency, so that the client and agency had control over the stores selected.

TabMo ring-fenced each physical store with both a 2km radius and 10km radius so that different creatives could be shown, depending on the proximity of the user to the store. Users identified within the target audience would see an ad on their mobile when they were within the 2km and 10km range. Tapping on the ad would open a full-screen map guiding them to the nearest stockist of the product. TabMo’s technology allowed footfall to be tracked in real-time so that the campaign could be continually optimised to ensure it was delivering return on investment.

The campaign drove sales across Malibu for both products, while a halo effect saw the campaign also drive sales on the wider Malibu product portfolio.

Over 39,000 visits to store were tracked during the campaign, with the cost per visit almost half the average benchmark expected for a campaign of this nature. The mobile ad campaign delivered nigh clickthrough rates, and an average dwell time of 16.04 seconds.

Chico’s and Vibes – Chico’s Mobile Campaigns
In September 2018, Chico’s, a women’s clothing retailer, partnered with mobile marketing firm Vibes to add mobile to its marketing mix in a bid to acquire more customers and find alternative ways, beyond email, to connect and communicate with its customers. Chico’s implemented several campaigns to increase mobile subscribers, including a St. Patrick’s Day promotion and an exclusive sneak-peek of its new spring collection for its mobile subscribers via the Spring Preview Guide.

When a customer joins Chico’s mobile program, they receive a welcome offer, which can be saved to their mobile wallet; early access to new collections; and exclusive offers. For the St. Patrick’s Day campaign, subscribers received a shamrock that they “scratched-to-reveal" their offer. For the Spring Preview Guide, subscribers received access to an exclusive digital catalogue, showcasing the season’s newest items.
By adding mobile into the mix Chico’s has grown its subscription database, acquired new customers, reengaged lapsed ones, and increased ROI, margin and UPTs (units per transaction). The welcome offer alone has seen more than 200,00 coupons redeemed.

Chico’s plans to grow its mobile marketing acitivites, including the launch of a new shoppable, digital catalogue available to its mobile subscribers, as well as a mobile sweepstake, and a holiday opt-in offers campaign. Additionally, in 2020, Chico’s has plans to implement Vibes Everywhere Commerce, a product that tracks the entire customer journey all the way through the purchase process.

Costcutter, Boutique and Hawk by TabMo – Find the Golden Mic. Campaign
One of Costcutter's key objectives is to drive new customers to their local stores through product promotions and effective, locally-targeted advertising.

Having targeted local audiences previously through custom-built mobile drive-to-store ad creatives, and in order to avoid too much repetition, TabMo decided to target those same audiences using an audio message. This was the first time TabMo had used audio to drive store visits.

Costcutter and its agency, Boutique, came up with a unique competition idea, 'Find the Golden Mic'. Throughout the summer Costcutter placed 60 Golden Microphones in its stores across the UK, sharing clues about the locations to help people find them on its social media channels. To stand a chance of winning one of the four summer prizes, customers finding a Golden Microphone had to take a selfie that included the Golden Microphone they had located and post their pictures on social media tagging @Costcutter with the hashtag #FindTheGoldenMic. Each week the competition was sponsored by a different Costcutter brand partner. Sponsors included Peroni, Heineken, Rekorderlig and San Miguel.

TabMo’s strategy was to target five different stores each week to allow it to more accurately assess the success of the targeting and whether the spike in store visitors correlated with the stores being targeted each week.

To reduce wastage TabMo targeted 18-55 year olds only once they were in the surrounding area of each store. They were targeted with an audio message played within music streams being listened to on their mobile, as well as an accompanying companion mobile ad banner.
The campaign delivered an excellent listen-through rates of 97.64 per cent. The campaign was optimised throughout its duration, a tactic that saw the cost per visit drop dramatically over the course of the campaign.

Twinings, LoopMe and the7stars: Twinings Superblends UK Campaign
As the retail landscape continues to evolve, it has become more important than ever for FMCG brands to link online metrics to offline outcomes. In fact, according to the Office for National Statistics £1 in every £5 spent with UK retailers is now spent online. With this in mind FMCG brands are having to become smarter when it comes to measuring the impact digital advertising spend has on sales of their products in store.

With this campaign, Twinings and LoopMe wanted to drive purchase intent and sales for Twinings Superblends product, targeting ABC1 high earners aged 25-44 in the UK. They also wanted to link online metrics to offline outcomes and drive in-store sales through digital advertising.
Working with The7stars and IRI, LoopMe’s ‘quali-tea’ campaign used data, analytics and artificial intelligence innovations to optimise towards the clients KPI in real-time and deliver real-world outcomes.

LoopMe used its PurchaseLoop Sales solution to measure product level purchases, optimising towards sales and providing deeper audience insights throughout campaign flight. Creative, rich media messaging was tailored to each supermarket stock list (Tesco, ASDA and Sainsbury’s). Supermarkets were then geo-targeted to ensure each creative was contextually relevant based on the location of the consumer.

LoopMe’s AI platform then trains a predictive model using this data to determine the likelihood of each user’s purchase intent increasing after having been shown the ad. Only if the probability is high enough, is the ad then served. The targeting is then refined and optimised as the campaign runs to improve results.

These results were supplied to the judges in confidence, but delivered significant uplifts in purchase intent and sales.