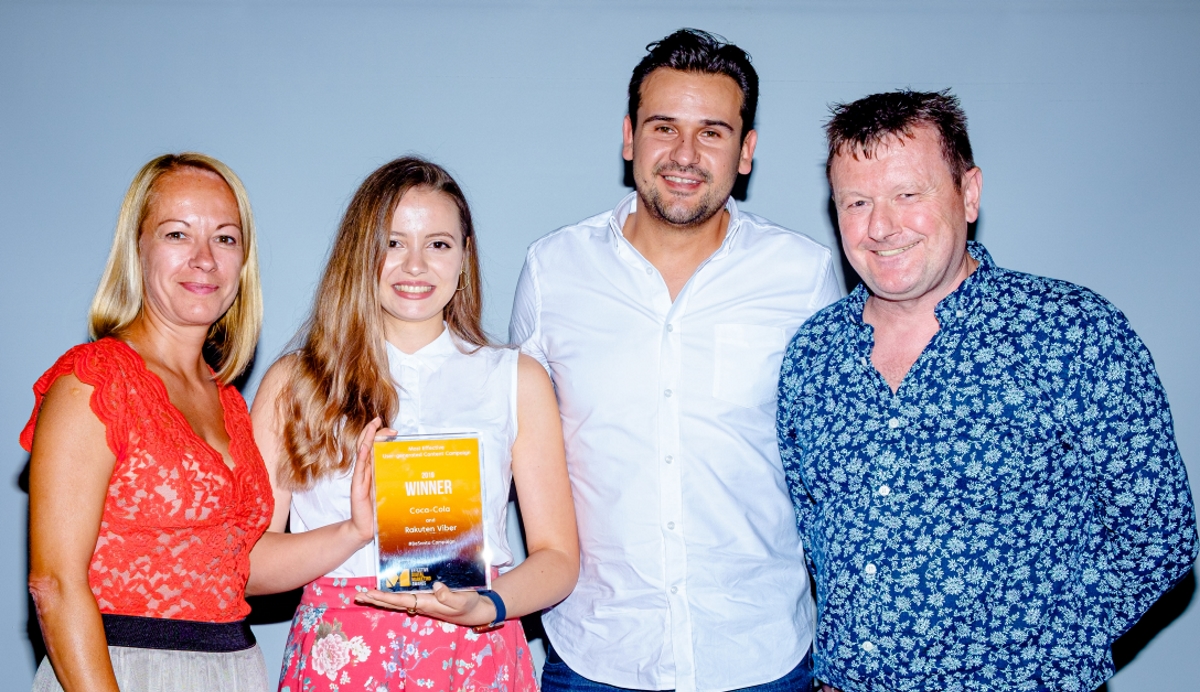 Most Effective User-generated Content Campaign
Coca-Cola and Rakuten Viber – #BeSanta Campaign
Coca-Cola wanted to inspire people to #BeSanta through random acts of kindness in their local communities as part of its ‘Christmas starts with you’ holiday campaign. The campaign’s aim was to break through the holiday content clutter and appeal to both digital natives and the young at heart with a focus on emotional storytelling.

In Bulgaria, Coca-Cola teamed up with Viber to create a highly branded, consumer-centric experience for customers using a holiday sticker pack and augmented reality (AR) filters. The experience managed to reach one in five people in Bulgaria.

The user journey began through either an interaction with the holiday sticker pack or through an in-app message driving them to Coca-Cola Bulgaria’s chatbot. Through the chatbot, consumers were given a list of ‘good deeds’ to choose from and had the opportunity to film themselves displaying their good will in a special video frame. The user was then encouraged to share their video – doing so rewarding them with more sticker packs.

The bot also invited people to a landing page with a counter showing all the good deeds completed on a Christmas tree, with each light on the tree representing a good deed. Christmas trees were also setup in shopping malls to showcase and track the progress of the campaign.

The campaign managed to achieve over 4m impressions, with more than 750,000 user chatbot interactions. There were 340,000 chatbot subscribers, which represented a 45 per cent growth, while 50 per cent of videos were video to completion and over 499,000 sticker packs were downloaded.

The judges thought it was a great campaign that was well-optimised for its target audience.

Most Effective Charity Campaign
The British Library and Crafted – Getting More From Google Grants
The British Library’s independent charitable Trust wanted to increase visits to the British Library’s website, build awareness of the British Library brand in search (particularly across a younger audience), increase online bookings, and maximise traffic and booking from Google Ad Grants, which it has been part of since July 2013. The problem is that it had to adhere to the strict Ad Grants criteria including maintaining a minimum five per cent click through rate, using no single word keywords, not being able to outrank paying competitors, and more.

Working with Crafted, the PPC strategy focused on improving traffic and brand presence across research based ‘high intent’ searches, growing the overall awareness of the British Library, and increasing awareness to drive event/courses/exhibitions/shop bookings.

Using keyword research and search analysis, Crafted found that search demand was always lower at weekends, meaning campaigns weren’t always reaching maximum spend – a problem because under Ad Grants any daily unspent budget cannot be carried over. So, it implemented day part targeting, and weekend focused campaigns (Dynamic Search Ads and ‘Things to do in London’ campaigns) to ensure budgets were being fully utilised, whilst also ensuring they were focused on the key objectives.

It was also found that a lot of US users liked to buy products online, so a US targeted shop campaign was introduced. Meanwhile, some revenue driving terms were not gaining the exposure the British Library wanted. These keywords were moved into paid Google activity to free up more budget.

The campaign saw traffic increase by 30 per cent, cost per click fall by 25 per cent, and online conversions increase by 506 per cent over the previous year. There was a 93 per cent increase in brand traffic and a 151 per cent growth in click through rate. When it came to the British Library’s intentions to reach younger people, there was a 77 per cent growth in traffic coming from 18- to 24-year-olds across the brand searches, and growth of 64 per cent among 25- to 34-year-olds.

A thorough and well-thought out campaign with excellent results.

Most Effective Performance Marketing Campaign
Pets Best Insurance and NMPi – Doing What's Best for Pets Best Insurance
Unfortunately, we are not allowed to publish the vast majority of this campaign’s background. What I can say is that this campaign came out on top in a close category that split judges’ opinions because it “used clear thinking to identify need, sensible thinking to execute clear strategy, and got huge results”.