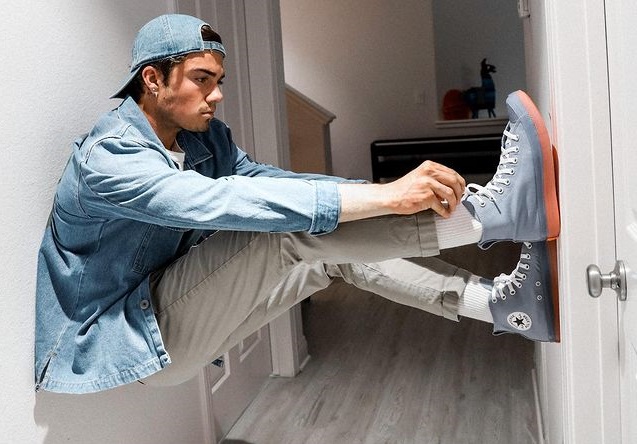 Most Effective TikTok Campaign
Converse, Foot Locker and Obviously – Converse CX x Foot Locker
The aim of this campaign was to increase social awareness and buzz for the new Converse Chuck Taylor All Star CX available at FootLocker, across both Instagram and TikTok. The companies also wanted to create high-quality and reusable in-feed and story content in order to drive traffic to the Converse CX product page.
Obviously partnered with 21 Instagram influencers and three TikTok macro influencers, using data science and AI to source the best influencer partners, based on an analysis of vertical, age, gender and other factors. Once the top candidates were compiled, Obviously reached out to 354 influencers, 298 of whom opted-in for consideration to partner on the campaign.  The 21 influencers were chosen from this group. Obviously then developed three creative briefs based on Converse's goals, and performed regular quality checks on the various pieces of influencer content.
Obviously's projections of 1.4m impressions were surpassed by 56% with 2.3m total impressions. A total of 126 pieces of unique content were created. Additionally, Obviously's work drove 5,527 clicks to Converse CX’s product page and the TikTok videos garnered over 6.9 million views and 1.9m Likes.
Judges’ View: “A lean budget which garnered significant engagement within the target audience. Great to see how influencer selection and management was executed.”

Most Effective Instagram Campaign
Vivel and The Digital Street – Vivel #VoiceOfArt
This campaign in India had big ambitions – to inspire a more equal society. It celebrated the voices of reason, strength, change and passionate expressions against patriarchy – be it stereotyping on the basis of gender or attire, and highlighting pay gaps and societal expectations. It created socially-relevant content during lockdown by asking people to contribute their voice, building a community of prolific change-makers who embrace and encourage gender equality.

All through August 2020, Vivel opened its social media to artists and its users to contribute with their #VoiceOfArt. The campaign launched with a video encouraging people to share their art with Vivel by uploading the artworks on their social channels, tagging Vivel and using #VoiceOfArt

In addition, 18 commissioned artworks from artists across India such as Srishti Gupta Roy, Sriya Singh, Namrata Kumar among others went up on the platform, showcasing the societal issues that women face. A number of partners including The Indian Idiot and The Great wall of India, shared the campaign with their communities and college networks also got involved.

In total, the campaign generated 769,000 posts and 2.2m views across more than 550 pieces of artwork, a tremendous, inclusive effort.

Judges’ View: “A really innovative and inclusive campaign that harnessed the power of their chosen subject and effectively leveraged the Instagram platform for promotional purposes.”

Most Effective Facebook Campaign
Best Friends Animal Society and ForwardPMX - Raising Funds For Animals In Need With The Power of Facebook
The challenge here was to convince people, in the midst of a global pandemic, that pets were still worthy of attention and support. The charity and its agency decided to tap into #GivingTuesday, which in 2020 was on 5 May, which meant they had just four weeks to pull the campaign together. The team devised a strategy to target the charity’s current donor base, individuals who watch their videos on Facebook, and also a lookalike audience, to garner possible new donors with a cohesive paid social campaign to span the week leading up to Giving Tuesday.

The creative for the campaign explained how people could help animals during a crisis like COVID-19, as well as how they should care for their own pets at home, in addition to calling for donations and matches. The team also included an ad for their Best Friends colouring book, which offered a fun activity for people to do during lockdown. So, while the team aimed to raise as much money as possible to fund shelters, they also hoped the campaign helped educate the public on why animals needed more help than ever, and ways they could get involved.

Working off a very small budget, the paid social campaigns on Facebook raised more than $91,000 during the seven-day flight. Donation volumes and revenue also saw consistent day-over-day increases as the campaign progressed, and one ad creative drove a whopping $55,000 in revenue alone.

Judges’ View: “Terrific results with a modest budget – every dollar was made to work hard in a well-thought out and executed campaign.”

Most Effective Launch Campaign
Roli and Nuuk – LUMI eCommerce Launch
The ambitious aim of this campaign was to drive global awareness of Roli’s LUMI musical instrument and generate £1m in online sales in the first month. The primary market was the USA with a small test budget for the UK and Europe.

The campaign ran across Facebook, Instagram, Messenger, YouTube, Search, Display and email. Nuuk generated landing pages and drove exclusively paid social media traffic to them with the objective to generate leads. It also optimized performance for lead generation as the main objective and offered a launch discount as the lead magnet to all subscribers. 157 targeting variations were tested in the two months leading up to the launch ad well as 10 different creative variations in each targeting test, totalling up to 1570 unique combinations. This 2-month period helped Nuuk identify the people most likely to buy the product when it became available.

Judges’ View: “A very clear entry with excellent levels of detail. A wide variety of channels were well-managed to achieve the best outcomes. This comes across as a campaign run by experts in their field. And the results exceeded the targets set by some measure.”

The campaign incorporated a loyalty app, segmented communications, and lots of gamification elements, including instant wins, prize draws, special missions, long-term rewards and weekly surprises, all of which offered customers the chance to win anything from more data on their plan to high-ticket items such as smartphones, cars, motorbikes and money.

In its first seven months since launch, the app saw 2.5m downloads, with 33.5m plays of a slot machine game, 1.6m fulfilled missions, and 4.1m redeemed benefits.
Judges’ View: Has done a great job with a challenging brief to an even more challenging audience which is generally hard to retain. They have come up with several engagement and retention mechanics which are hugely impressive.”

Most Effective Video Campaign
Shopkick and Moburst – Moburst/Shopkick TikTok Triumph
Shopkick is a retail shopping rewards app where consumers scan products to secure free gift cards. With the onset of the pandemic, in-store shopping numbers dropped dramatically, and Moburst and Shopkick shifted strategic attention to online shopping and driving acquisition there via social platforms. A social media audit revealed that within Shopkick’s immediate competitive set, attention was heavily saturated within Facebook, Instagram, and Twitter, and there was much less competitive attention and investment on TikTok. The campaign, then, targeted an 18-30 audience on TikTok.

The first iteration of the campaign did not perform well. To get it out quickly, assets were used from other platforms. These did not resonate well with the TikTok audience, so Moburst went back to the drawing board to develop a much more TikTok native-looking campaign.

Judges’ View: “An honest campaign analysis – impressive that they were prepared to go back to the drawing board, and rethink their strategy when the initial creatives did not work. A risk…as presumably this involved higher costs and delays, but one which paid off with strong results, whilst giving the opportunity to learn from mistakes and make improvements.”