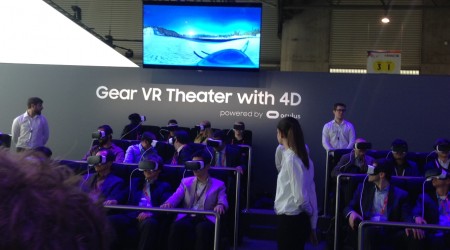 Whoever said a lot of the excitement at this year’s Mobile World Congress would be around Virtual Reality wasn’t wrong. The show floor is awash with VR demos, including, in no particular order, a trip in a helicopter and a connected car to fix a burst water pipe on the AT&T bit of the Innovation City stand; a ski jump on the SK Telecom bit of the same stand (I managed 104m if you’re interested, and I wasn’t even wearing ski boots); a trip in a submarine; and Samsung’s 4D Cinema, which involves Oculus-powered headsets and around a dozen rows of seats that move in time with the VR action. Judging by the whoops and cheers from those taking part, this looked like the pick of the bunch, though personally I couldn’t justify waiting around an hour in the queue to take part.

While on the Innovation City stand waiting for my burst water pipe VR demo I bumped in to a couple of guys over from Shop Direct Group, owner of Very.co.uk among other brands. Their particular brief, they told me, was to look at how VR might come into the retail space over the next few years, but, unless I misheard him, they were just two of a group of 30 people from the company out in Barcelona to see what tech they should be looking at. An impressive level of commitment that I’m sure puts many larger outfits to shame.

Qualcomm has  a nice touch on its stand – the Invisible Museum. Just as Qualcomm’s chips do their work in the background, so the Invisible Museum looks like it has nothing to see, just five plinths, each with a plastic model mounted on top. Point one of the supplied tablets at the models, however, and they come to life through Augmented Reality, with hotspots appearing on the screen where you can find out how Qualcomm is helping to power, for example, the Internet of Things. Neat.

As a cyclist, I was impressed by the See Sense connected bike lights (£120 for a front and rear set). In addition to flashing off and on so you can be seen by other road users, they also log data relating to air pollution, potholes and other conditions to feed back to the local authority so they can potentially act on it. And sticking with the transport theme, it was interesting to hear Ford CEO Michael Fields this afternoon say that the company is not satisfied with its 6 per cent share of the $2.3 trillion-per-year automotive market, and is aiming to take a share of the transportation services market, worth $5.4 trillion per year, of which Ford currently take precisely zilch, give or take a few hundred quid. Thanks to Uber and driverless cars, cabbing is obviously now seen as a smart business to be in.

Other than that, the other journalists seem to get younger with each passing year; the ad tech companies seem less prevalent than usual – in some cases going from a stand the size of a large house in previous years to a meeting room the size of a large table this year; and Intel takes first prize for most impenetrable tech speak (so far) for a bit of its stand labelled thus: Multi-vendor WiGig Interoperability. But I’m sure something will trump that tomorrow.

"Terrence Liverpool, AVP Mobile Banking at @synchrony will be joining us at the App Marketing Masterclass #NewYork t… https://t.co/U92tl2Smhx"
13 hours ago
"James Rosewell, founder and CEO of @51Degreesmobi, explains why and how different devices can be targeted to maximi… https://t.co/GVucrpx10J"
14 hours ago
"We're returning to #Amsterdam in three days! You'll hear from experts @AppsFlyer @Outbrain @mobpros & @ironSource h… https://t.co/G3GPCcdxMT"
15 hours ago