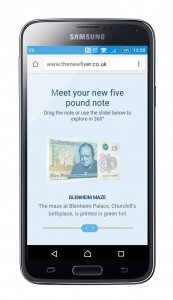 The Bank of England's new polymer £5 note won't be in public circulation until September, but following the reveal of the note's design, the bank is promoting the new fiver with a mobile-optimised website and an augmented reality experience that aims to introduce the note to the public.

The campaign makes use of Blippar's AR technology, enable users to open the company's app to digitally 'transform' a current £5 note into the new design, allowing them to familiarise themselves with the new look.

The bank has also launched a mobile-optimised site, created by digital agency Cyber-Duck, also enables visitors to explore the note in 360 degrees, and promotes the benefits of the new polymer note, which is resistant to dirt and moisture, harder to counterfeit and 2.5 times more durable than paper notes.

"The first time you receive a polymer £5, you want to know it's the real thing," said Danny Bluestone, CEO of Cyber-Duck. "The website we're producing for the Bank of England will help remove any doubts as consumers will be able to engage with the banknote online well before they see it in person."

The website will form the focal point of the Bank of England's multi-channel education campaign that aims to inform the public of the change in the note's design before it begins circulation in the autumn. The note, which features Sir Winston Churchill, is the first polymer banknote to be produced by the Bank of England. Polymer £10 and £20 notes are planned for circulation in 2017 and 2020 respectively.