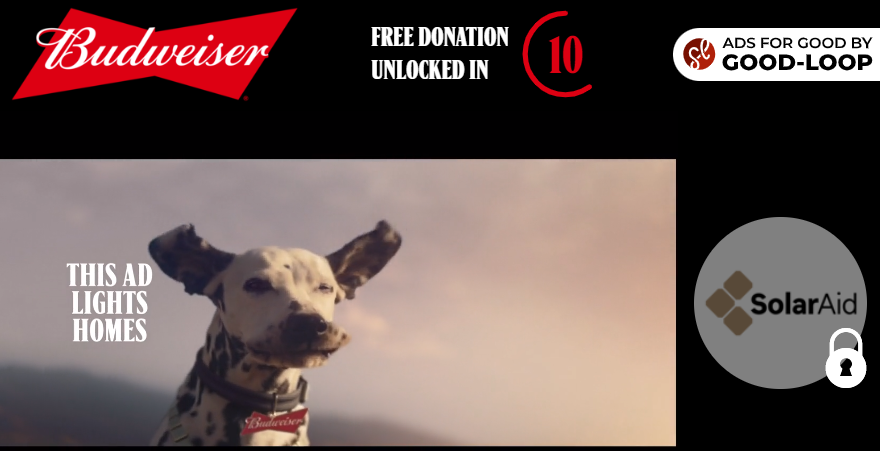 Budweiser has partnered with ads for good platform Good-Loop and international development charity SolarAid, to help light up homes in developing communities worldwide through views of its latest ad.

The partnership allows a donation to be made to SolarAid, who are working to combat climate change and energy poverty, by creating a sustainable market for solar lights in Africa, each time a person watches Budweiser’s video ad.

Set to run until early July, the initiative aims to help donate over 6,100 solar lights, reaching 33,200 people and save families a total of £981,000. The initiative also aims to give children 6.2m more hours of extra study time, while decreasing carbon dioxide emissions by over 6,500 tonnes.

The ad celebrates the milestone achievement of all Budweiser in the UK being brewed with 100 per cenrt renewable electricity.

The ad opens with a close-up of a dalmatian, its ears and face flapping against the breeze as it’s towed through a field of barley by Budweiser’s iconic Clydesdales. As the camera pans out, it reveals an epic landscape dotted with Budweiser wind turbines with supers announcing that every Budweiser is now brewed with 100 per cent renewable electricity.

The campaign follows on from Budweiser Brewing Group UK&I (BBG) becoming the first major brewer in the UK to commit to brewing from 100 per cent renewable sources in 2018 and delivering two solar farms and a wind turbine in 2021, generating enough renewable electricity in the UK to power the brewing operations not only of Budweiser, but its entire portfolio: including other BBG brands such as Stella Artois, Corona, Bud Light, and Becks.

“Budweiser is already brewed using electricity generated from solar panels,” said Budweiser Senior Brand Manager, Georgia Doe. “We wanted to take this one step further by helping to provide solar powered lights to those in need, enabling them to have a brighter future and showing our commitment to doing good for the planet.”