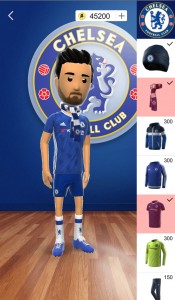 The Chelsea store will enable users to purchase unique club items such as 2016/17 home and goalkeeper shirts and shorts, as well as hats, scarves and training apparel, all of which can be added to their avatar's wardrobe.

The special products are purchased using in-app currency, which users accrue over time or can buy using an in-app purchase system.

The partnership between Chelsea FC and Rawr Messenger, which was created by Helsinki-based developers Futurefly, will also include reactive animations that mimic real-world Chelsea events, such as players' unique goal celebrations. These will be activated by hashtags within the messaging system.

"This is an important step for the club as we look to engage and entertain our many millions of fans," said Bruce Buck, chairman of Chelsea FC. "This ground-breaking relationship with Rawr puts us at the front of the pack when it comes to digital innovation among sports clubs, and we cannot wait to see how Chelsea supporters interact with each other, and their other friends, all over the world."

"We are delighted that Chelsea Football Club has recognised the potential of opening a digital store within Rawr," said Oskari Häkkinen, founder and chief product officer of Futurefly. "As brands across the world seek to engage with new customers in increasingly innovative ways, we believe that this partnership will be a landmark moment for the messaging industry as a whole.

"Our strategy from day one was to create a platform which would be attractive to brands, and while other messaging apps are still trying to find the right formula for monetisation, Rawr provides brands a way to tap into the messaging market, while offering a generous revenue split which other apps are unable to match."