Every day for the next two weeks we’re showcasing the winners of this year’s Effective Mobile Marketing Awards. Today, we're focusing on five campaign categories, from integrated through to social. 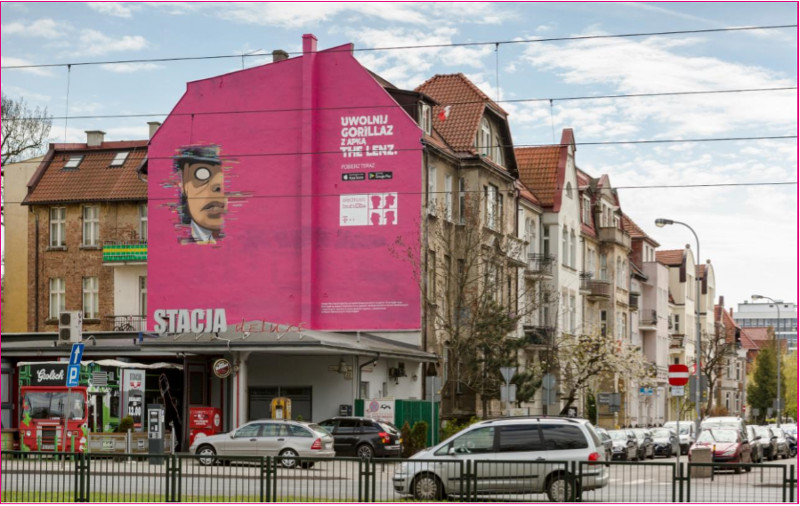 The campaign saw Deutsche Telekom teaming up with virtual band Gorillaz to turn its brand colour, magenta, into a media channel. Using chroma key technology, the Lenz app let users point their phone at anything magenta to reveal AR content featuring the Gorillaz characters, along with local product offers in some instances.

The campaign targeted millennials, traditionally the hardest demographic for Deutsche Telekom to engage.

To drive downloads of the Lenz app, its launch was promoted through a fully integrated campaign, covering digital, OOH and print. A mobile ad mimicked a phone call from Gorillaz character Murdoc, inviting them to download Lenz. This was supported through partnerships with 500 micro-influencers, and out-of-home stunts across Europe, including turning the grass in front of Tower Bridge magenta.

The campaign generated 14m impressions in its first two weeks, along with over 1m organic video views and 2,700 social mentions. Lenz was downloaded 132,000 times, with users opening the app on average nearly three times each.

The judges said: “Bang on trend. Used AR well to engage their targeted customers using a bold colour to highlight engagement opportunities in their environment.”

Earning a highly commended in this category were Jet2.com, MEC and Blis for their Jet2.com Ski campaign, which explored the impact of using different types of media in a single campaign – including syncing OOH with mobile through the use of location data. 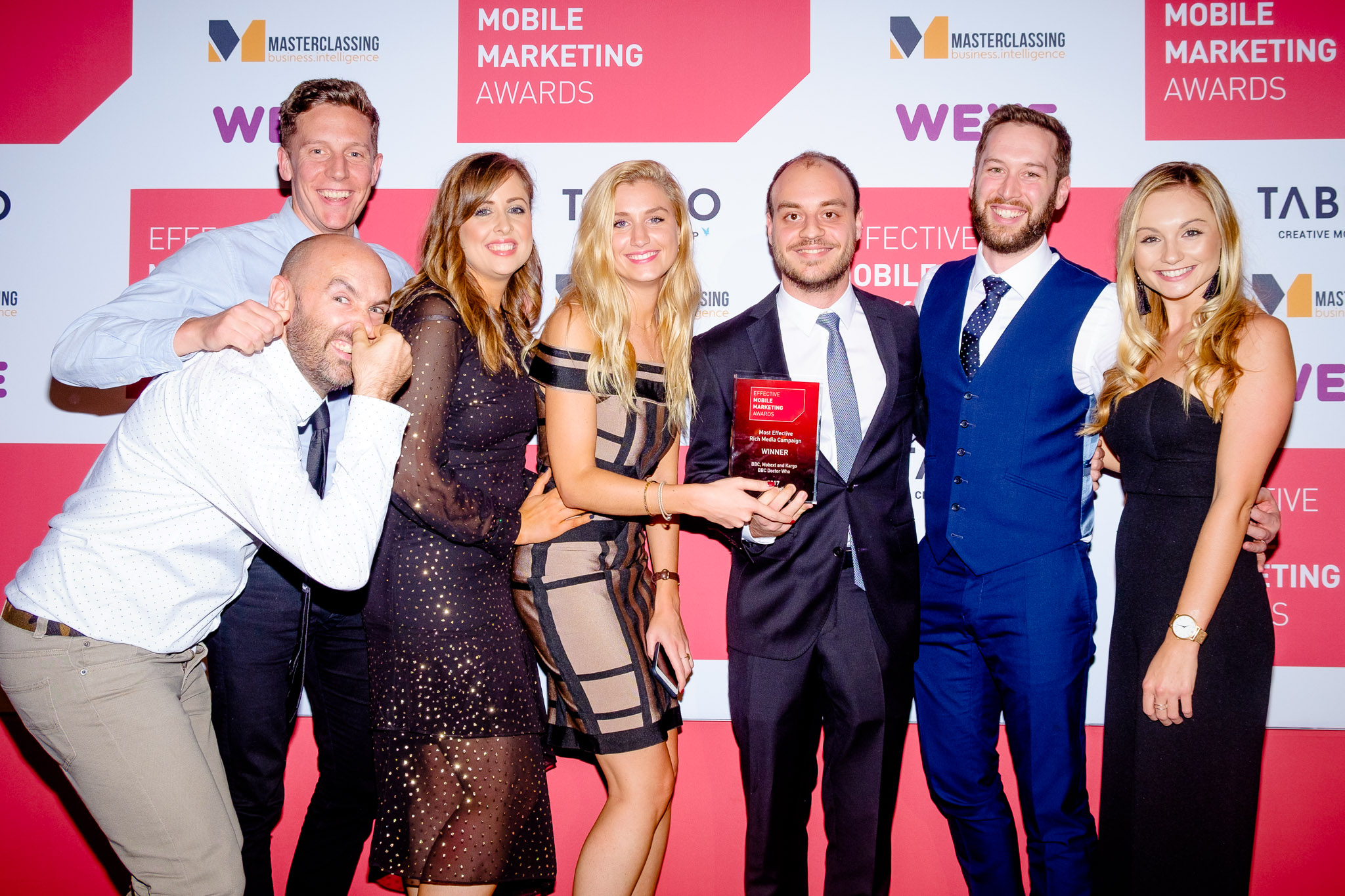 The winner in this category was the BBC, Mobext and Kargo for their BBC Doctor Who campaign.

With live TV viewing among 16-24 year olds dropping by almost a quarter since 2010, and with Doctor Who – a show with a legacy reaching back to 1963 – resonating with an older audience – the BBC turned to mobile to reach the youth segment.

The brand was the first in the UK to use Kargo’s Sidekick ad unit, a mobile format that sits beyond the banner. The creative used The Doctor, the most well-known character to initially engage users and prompt them to expand the ad, where they were shown a ‘flip cube’ format highlighting on all of the show’s characters.

The ad ran only on a whitelist of high-profile websites which featured gaming and technology content. The campaign generated 45,812 engagements in total, with an expansion rate of four per cent.

Yapi Kredi Bankasi and KocZER won a Highly Commended in this category for ‘Find the Hidden Vadaa’, a campaign which tied into Survivor, Turkey’s most popular show, with a 360° video campaign. 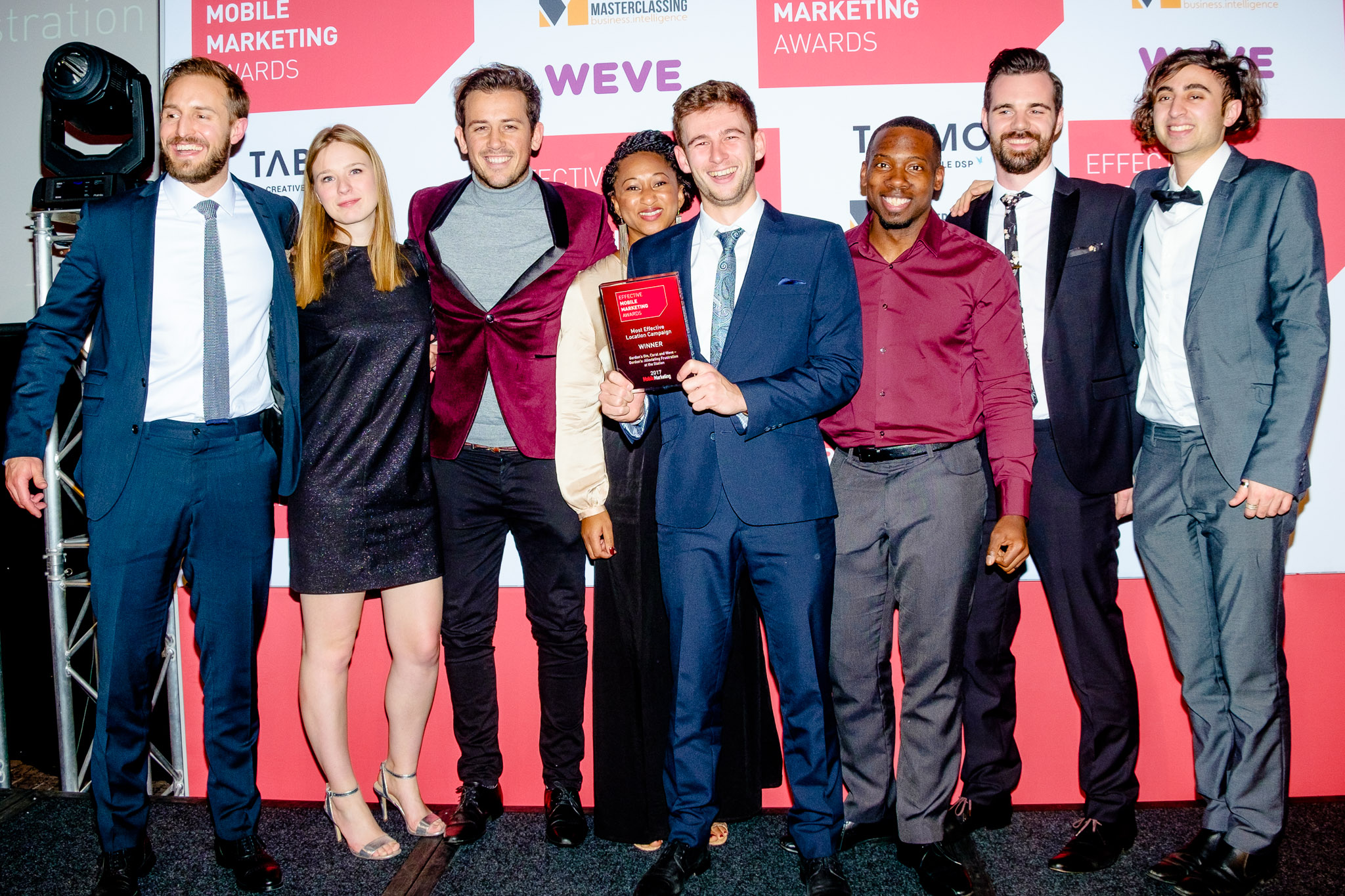 The winner here was ‘Gordon’s: Alleviating Frustration at the Station’, a joint effort between Gordon’s Gin, Carat and Weve.

The campaign tapped into insight that commuters stuck at train stations could be tempted into buying a premixed gin-and-tonic can while they waited. Weve overlaid a number of data points, including live and habitual location and a National Rail API feed, that in combination could be used to trigger messages to pre-qualified target consumers when trains were delayed at their station.

These consumers were sent an MMS driving them to a personalised store locator pointing them to the nearest Gordon’s stockist – presenting itself as a solution without specifically highlighting the frustration.

The judges said: “An excellent combination of location, highly-relevant, targeted data via the API from National Rail, with demonstrable sales results.” 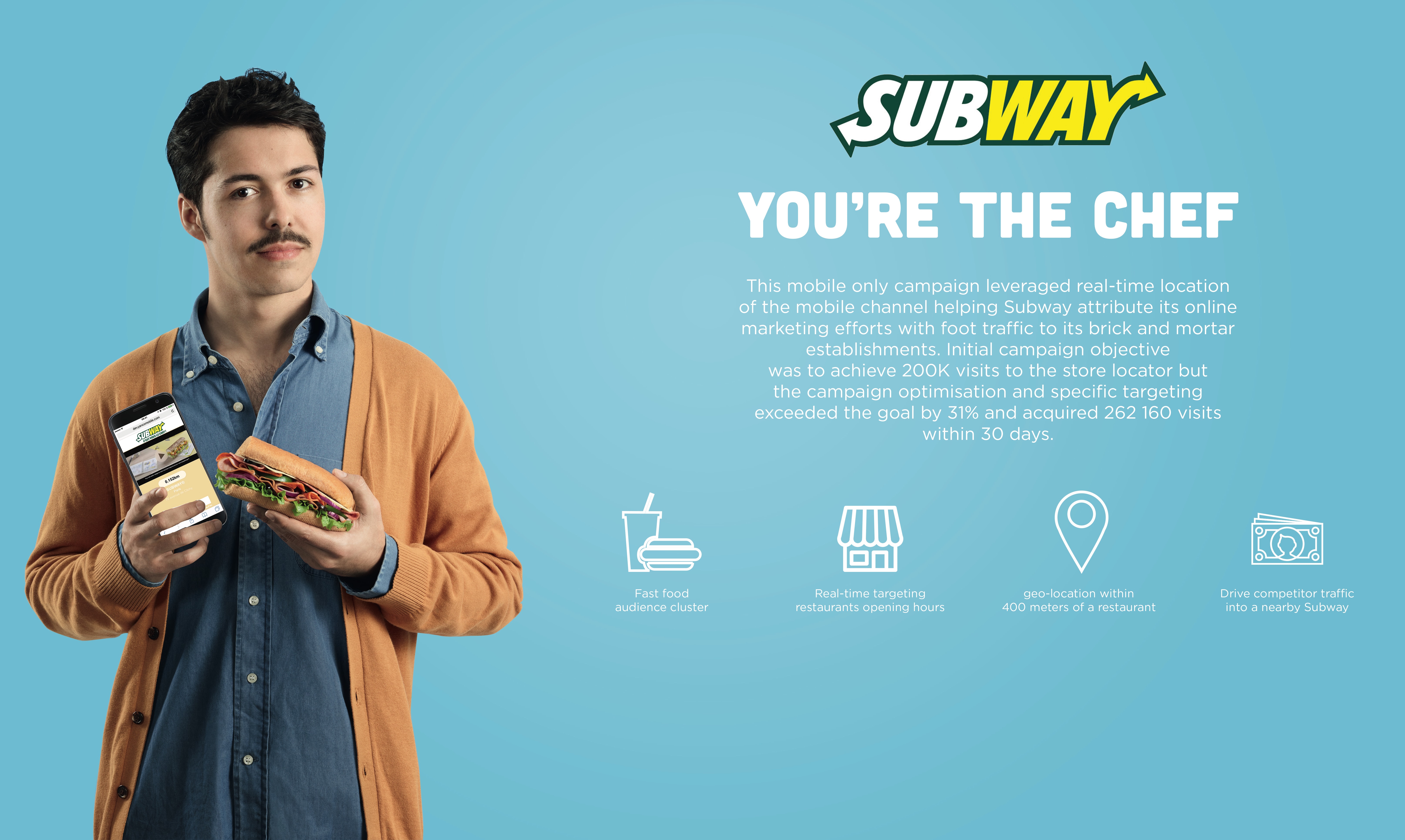 Picking up this award was Subway France, S4M, MediaCom and Lokall, for the ‘You’re The Chef’ campaign.

In a highly competitive market, the sandwich chain wanted to reach users on-the-go and drive them to restaurants with a personalised creative displaying the distance to a nearest Subway restaurant. The campaign also targeted mobile users in the vicinities of four different Subway competitors around France to redirect these consumers to a nearby Subway instead.

To create a fast food consumer audience cluster, Subway and its agencies identified and grouped smartphone IDs using historic and behavioural user. Then, 30 days prior to the campaign, they collected anonymous device IDs at restaurant locations of four different competitors around France. These device IDs were divided into two groups, a control group and an exposed group. During the campaign, only users in the fast food audience cluster and the exposed group of IDs saw the campaign if they were within 400 meters of a Subway restaurant or one of the selected four competitor restaurants. Converted users could click on the call-to-action that led them into the native map application in their mobile with a store locator and travel itinerary.

The campaign also applied a frequency cap of three times for each user to avoid bombarding users with the ad countless times.

The campaign exceeded its objectives, generating 262,160 visits to Subway restaurants within 30 days. When comparing the total users exposed to the campaign versus users not exposed, the results showed an impressive 46.7 per cent uplift of visits to Subway restaurants across France. The campaign targeting competitors’ outlets saw almost 40 per cent of smartphone users redirected to the nearest Subway from one of the outlets.

The judges said: “This campaign employed brilliant use of data, targeting and timing to drive results. A meaningful metric in terms of cost per landing page and phenomenal brand switching. 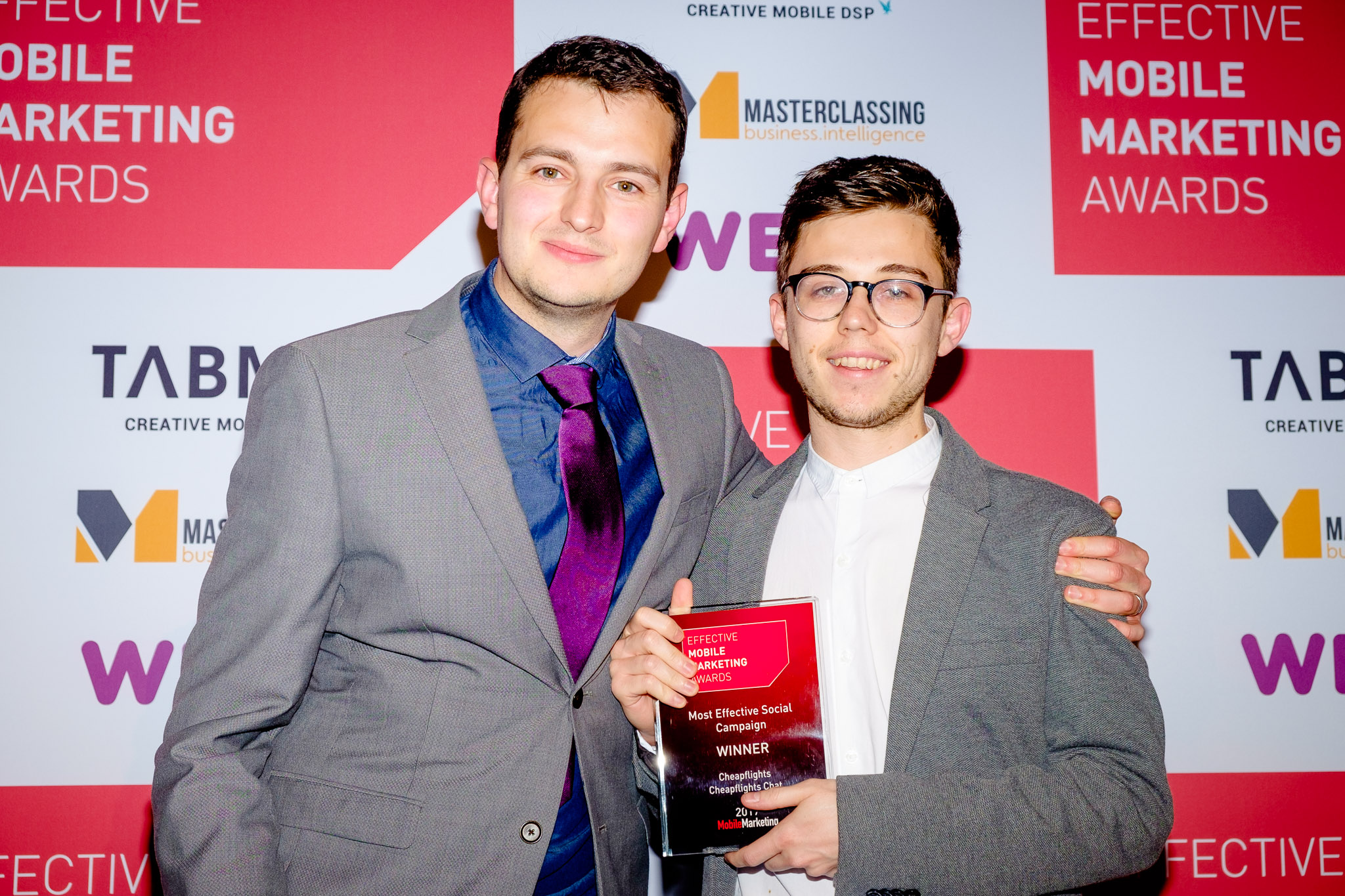 Taking home this trophy was Cheapflights for Cheapflights Chat, a holiday search bot launched in June 2016. The bot was designed to combine multiple functions that would normally require downloading multiple apps, within a single app most people already have on their phone: Facebook Messenger.

At launch, Cheapflights Chat was the first Messenger bot to let people search for flights and hotels, but it also drew in a variety of other features, utilising seven APIs. It also offered a live weather search, “inspire me” destination tools, flight search by weather, a currency converter and an emoji flight search – so that users could type in a koala emoji and get flights to Sydney, for example.

To promote the launch, Cheapflights ran a competition-led social media campaign. The competition mechanic was built directly into the bot and was promoted on Facebook using banner ads and videos.

While results are confidential, the bot has outperformed Cheapflight's expectations, and the company plans to release a new version with even more features shortly.

The judges said: “An innovative, well-executed and well-thought-out campaign that combined multiple data feeds in order to drive significant results.”

Also scoring a Highly Commended in this category was PG Tips and AnalogFolk, for the PG Tips Morning Moods campaign. This took the brand’s mascot, Monkey, and put him in a series of GIFs available on the likes of Facebook Messenger to WhatsApp.