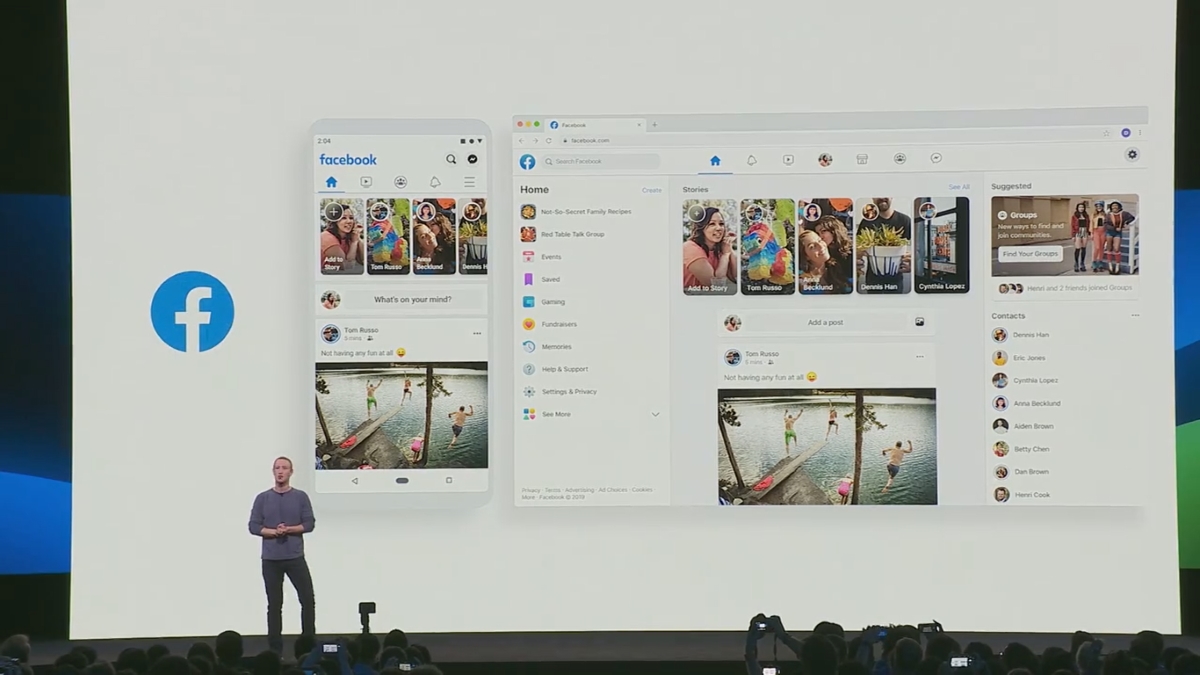 Facebook has overhauled its design, opting to ditch the blue for white, as it begins to put its vision of building a more privacy-focused social network into effect. It also unveiled a raft of changes for Messenger, Instagram, and WhatsApp.

At the annual F8 conference, Facebook announced its intention to put groups at the centre of the experience on its platform. As part of this shift, the groups tab has been redesigned to show a personalised feed of activity across all the groups that the user is part of, and ‘improved recommendations’ are promised from a new discovery tool.

Facebook is also making it easier to get group recommendations in other areas of its app, such as in Marketplace or Facebook Watch, and users are now able to share content directly to groups from the news feed.

Different types of groups will gain specific features depending on the needs that they have to satisfy. For example, health support groups will enable members to post questions and share information anonymously, job groups will get a template for employers to post job opening, and gaming groups are set to gain a new chat feature for members to create threads for different topics.

Away from groups, the social network has announced that it has expanded Facebook Dating to the Philippines, Vietnam, Singapore, Malaysia, Laos, Brazil, Peru, Chile, Bolivia, Ecuador, Paraguay, Uruguay, Guyana, and Suriname. Before, it was only available in Colombia, Thailand, Canada, Argentina, and Mexico.

Along with the expansion, a feature called ‘Secret Crush’ was unveiled. This enables people to select up to nine of their Facebook friends who they would like to express interest in. If that friend is on Facebook Dating, they receive a notification to say someone has a crush on them. If that person also selects the other as their crush, the pair’s desire for each other is revealed.

There’s also a ‘Meet New Friends’ feature being rolled out on Facebook to help connect people based on their school, workplace, or city. This feature is opt-in, so only those open to meeting new friends will be surfaced.

Other features include the introduction of shipping across the continental US on Marketplace and a new events tab.

Messenger
Facebook’s Messenger app is also getting a redesigned with a ‘faster and lighter’ app promised – one that will launch in under two seconds and use less than 30MB to install.

The Messenger app will now also provide a way for friends and family to discover and watch videos together in real-time in a similar fashion to Facebook’s Watch parties. And a desktop app is arriving.

Meanwhile, Messenger is getting a dedicated space where users can discover stories and messages with their closest friends and family. Here, users will also be able to share snippets from their day and choose exactly who sees their posts.

All of the above features will be rolling out later in the year.

Instagram
The multimedia sharing app has begun testing a feature which enables creators to tag the products in their photos, enabling users to shop directly from creators’ posts without leaving Instagram. There’s also now a way to raise money for non-profits directly on Instagram via donation stickers in stories.

In addition, Instagram is going to get a new camera design ‘in the coming weeks’. The camera will include a ‘Create Mode’ for users to share without a photo or video and make it easier to access the app’s popular camera tools.

However, the biggest news on the Instagram front is probably that the app has begun testing removing follower and like counts in order to drive more "meaningul interactions".

WhatsApp
Just the one new thing being brought to WhatsApp this time round. Over the next few months, users will be able to a business catalogue within WhatsApp when chatting with a business. These catalogues enable businesses to showcase their goods.

Other stuff
Facebook is expanding its Portal video chat devices outside of the US. First, the Portal and Portal+ devices are being brought to Canada, then they will arrive in Europe in the autumn.

Portal is also getting updates to make it more useful beyond video calling. Users will be able to “hey Portal, good morning” to get updates on birthdays, events, and more. The ability to send private video messages is being added, and Facebook Live will arrive. And, through a collaboration with Amazon, Portal is going to get flash briefings, smart home control, and the Amazon Prime Video app later this year.

Elsewhere, Facebook is expanding Spark AR to more people. Now, the Spark AR Studio supports both Windows and Mac and includes new features and functionality for creation and collaboration. Furthermore, Facebook is opening Instagram to the entire Spark AR creator and developer ecosystem this summer.

Finally, the Oculus Quest and Oculus Rift S virtual reality (VR) headsets have opened for pre-orders with shipping beginning on 21 May. The Quest, an all-in-one VR gaming system, enables owners to pick up and play without being tethered to a PC. On the other hand, the Rift S is for those with a gaming PC. Both start at $399.

Facebook is also launching Oculus for Business later this year. And is adding Quest to the program, providing a suite of tools to help companies with the way they do business via VR.