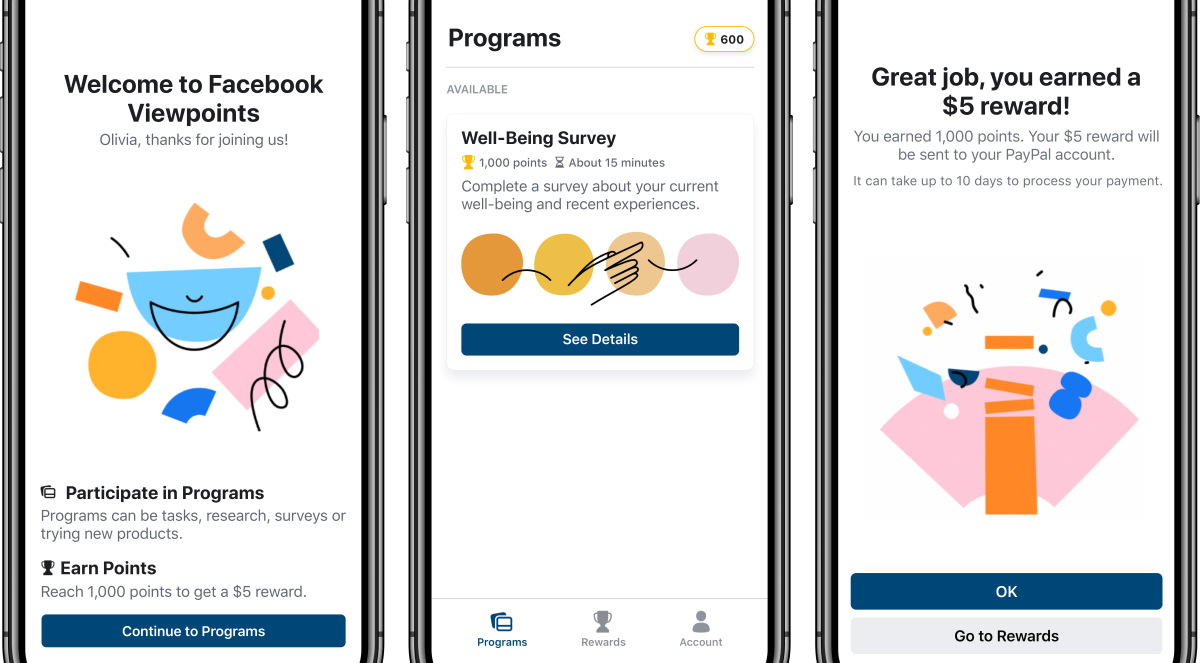 Facebook has followed up its previous market research controversies with yet another app which pays users to take surveys about the tech giant’s products.

Facebook Viewpoints comes just five months after Facebook introduced ‘Study’, an app which collects and analyses the apps people use, the amount of time these people spend in apps, where users live, the devices they use, and more in exchange for ‘compensation’. Earlier this year, Facebook also came under fire for the ‘Facebook Research’ VPN app, which was paying people as young as 13 for access to their phone and web activity.

Unlike Study and Research, Viewpoints will seek the opinions of users rather than following their every move.

People who download the Viewpoints app will be invited to join ‘programs’ of surveys, tasks, and research. Facebook has promised it will explain the information which will be collected, how the information will be used, and how points users will receive for completing a program. Points are collected by users and converted into payments sent via PayPal, once a certain amount of points have been collected.

Facebook has said that it won’t sell any information to third parties and won’t publicly share Viewpoints activity on accounts linked to the app without permission. Users can also end participation whenever they want.

In response to previous criticism, one would imagine, the app is only open to people 18 and older in the US who have Facebook accounts.

"Tune in to our podcast with Nick Millward of @mGageLLC where we discuss #RCS - explaining what it is, how it works,… https://t.co/qxBWDeYOMd"
1 minute ago
"The countdown begins! You only have until midnight UK time to benefit from the Early Bird discount for #EMMAs. Chec… https://t.co/fzEW1C66kX"
2 days ago
"Sony invests $250m in Fortnite maker @EpicGames https://t.co/OsatqeTqPJ"
2 days ago