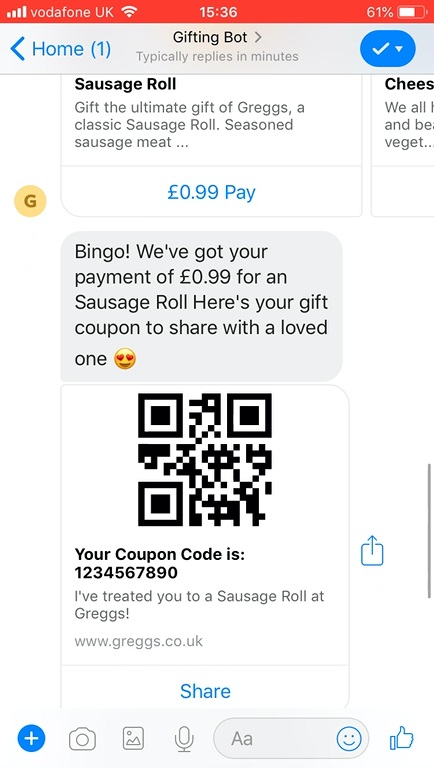 Quick service restaurant (QSR) chain Greggs has partnered with mobile-first agency Fetch to launch the UK's first ever transactional Gifting Bot within the QSR space. The chatbot, which operates via Facebook Messenger, can be used to purchase Greggs goods and send them to friends.

"The festive season is all about generosity and giving, and we've now made it easier than ever to give the gift of Greggs, so there really is no excuse for a disappointing secret Santa present this year," said Hannah Squirrell, customer director at Greggs. "We're excited to be the first company to use bot technology for gifting in the UK and we hope our customers get into the spirit of the bot, even after the Christmas period."

The gifting bot integrates into Greggs' existing ePOS infrastructure, enabling redemption at any of Greggs 1,800+ locations in the UK via scanning the user's smartphone. The team behind the campaign are also planning to continue to evolve the product, enabling integration with third party payment platforms like Apple Pay and Android Pay.

The bot was developed in collaboration with chatbot specialists Autosermo, and Fetch, which operates as part of the Dentsu Aegis Network, has run media activation, planning and buying through its sister agency, Carat Manchester.

"We spotted an opportunity to go beyond the traditional gift cards and allow consumers to engage in random acts of kindness over the Christmas period," said James Lodge, director of mobile at Fetch Manchester. "We're hugely excited to be working with Greggs and Carat on the Gifting Boy and to be leading the way in innovation. With the proliferation of messenger apps and over 50 per cent of users opening their messenger app at least once a day, it was a no brainer to build the Greggs Gifting Boy in a place of high engagement to drive scale and virality."