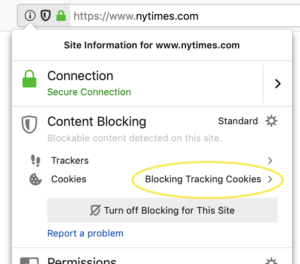 Firefox has blocked third-party tracking cookies and cryptominers on Android and desktop. The company said the move marks a major step in its efforts to bring stronger, usable privacy protections to everyone using Firefox.

For the latest release of the browser earlier this week, Enhanced Tracking Protection is automatically turned on by default for all users worldwide as part of the ‘Standard’ setting in the Firefox browser and will block known “third-party tracking cookies” according to the Disconnect list. Firefof first enabled this default feature for new users in June 2019.

Currently over 20 per cent of Firefox users have Enhanced Tracking Protection on. With this week’s release, Firefox said it expects to provide protection for 100 per cent of it users by default.

In a blog post, Mozilla, which makes Firefox, explains how Enhanced Tracking Protection works behind-the-scenes to keep a company from forming a profile of a Firefox used based on their tracking of the user’s browsing behaviour across websites, often without the user’s knowledge or consent. Those profiles and the information they contain may then be sold and used for purposes the user never knew or intended. Enhanced Tracking Protection helps to mitigate this threat and puts the user back in control of their online experience.

Users will know when Enhanced Tracking Protection is working when they visit a site and see a shield icon in the address bar. Users who want to see which companies are being blocked can click on the shield icon, go to the Content Blocking section, then Cookies. It should read ‘Blocking Tracking Cookies.’ Then, by clicking on the arrow on the right hand side, the user can see the companies listed as third party cookies that Firefox has blocked. To turn off blocking for a specific site, click on the ‘Turn off Blocking for this Site’ button.

The Cryptominers block will prevent attempts to access a computer’s CPU, slowing it down and draining its battery, in order to generate cryptocurrency for someone else’s benefit. In the latest release, Firefox users can also get protection from Fingerprinting Scripts, which harvest a snapshot of a computer’s configuration when a user visit a website, by running Firefox in ‘Strict Mode’. Mozilla said it plans to turn fingerprinting protections on by default in a future release.