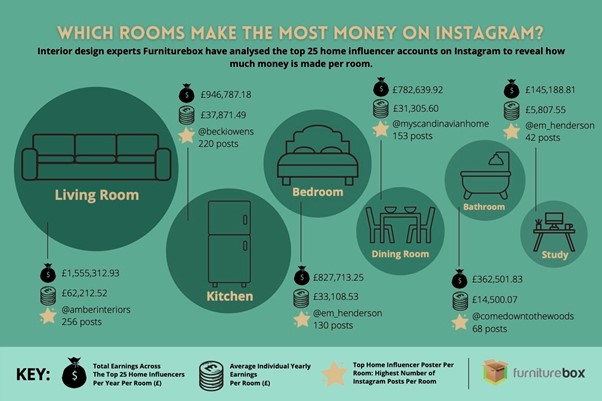 So, how profitable is interior style online? And which rooms have the highest earning potential. To answer these questions online furniture retailer Furniturebox analysed 25 of the top interior design Instagram influencers and evaluated their content from January 2019 – October 2021 to see which rooms featured the most on their feed and earned the most money. This was then used to calculate an estimated total earning per room, per year for each influencer.

The study found that the living room is the most photogenic and profitable room in the house, earning the 25 influencers a collective £4.15m or £1.55m per year across a total of 1,766 photographs. On average, Furniturebox calculated that a year's worth of living room snaps has the potential to make each interior design Instagram influencer £62,213 per year.

“It’s spectacular to see the amazing earning potential a strong sense of interior design can bring to an individual,” said furniturebox Managing Director and Co-founder, Monty George. “This study highlights the fresh and new career opportunities interior design and home improvements can bring, with home influencers building strong careers on the styling of their homes.

“It’s great to also break down the popularity and earning potential of each individual room. I was certain we’d see the living room scoring highly, but for a staggering £4m to be potentially made across the top home influencer accounts in 32 months from living room pictures is huge! This highlights our public interest for a constant source of home styling inspiration and shows that this is a growing industry to feed the interior demand.”