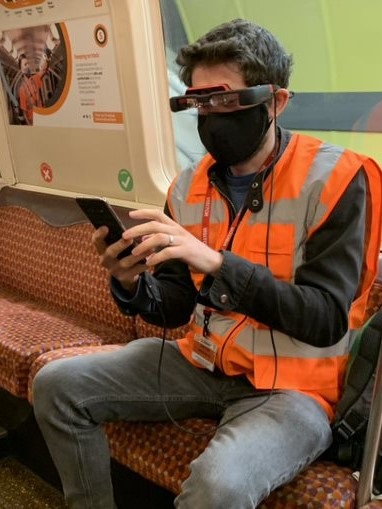 5G RailNext, a project to explore new 5G experiences for commuters, has released details of a private 5G network created to connect passengers on an underground train on Glasgow's historic Subway. Glasgow Subway isthe third-oldest underground rail system in the world after the London Underground and the Budapest Metro.

As part of the project, researchers from the University of Strathclyde installed a ‘pop-up' network using to provide track-to-train connectivity between Buchanan Street and St Enoch stations.

The private and public sector consortium was led by Cisco, along with partners University of Strathclyde, Strathclyde Partnership for Transport, Glasgow City Council, and SMEs Ampletime and Sublime. The project was run in partnership with a similar project running in the Seoul Metro system with South Korean partners ETRI. The UK-South Korea collaboration aimed to show the potential of 5G in some of the most challenging deployment environments.

The project was funded by the Department for Digital, Media, Culture and Sport (DCMS). It explored the potential for delivery of personalised advertising content using augmented reality (AR) mobile applications enabled by 5G connectivity. It also studied the willingness of passengers to use mobile AR through wearable devices such as headsets.

The final live trials in March were carried out on a dedicated train which drove round the Glasgow circuit continuously during normal passenger service. Triallists used the infotainment applications on handsets and headset devices.

The applications allowed users to virtually try on and buy sports goods from fashion outlets while travelling in the Subway’s tunnels, something that wasn't possible previously, as the data connection didn't exist.  Bringing together the connectivity and the applications, the project was able to deliver and measure the AR advertising experience in a mass public transit environment. Researchers say that with their dedicated private train network, they successfully demonstrated the live operation and potential of infotainment in an underground rail environment.

"The University of Strathclyde has vast experience of developing private 5G networks to create affordable connectivity solutions in both urban and rural locations, as well as hosting the Scotland 5G Centre in our Technology and Innovation Centre at Strathclyde,” said Principal and Vice-Chancellor of the University of Strathclyde, Professor Sir Jim McDonald. “We are delighted to be building upon our strategic relationship with Cisco, and our other industry and UK Government partners, on this exciting transport project."

Digital Infrastructure Minister Matt Warman said: "Losing phone signal when hopping aboard an underground train can be a pain in our connected age, so I'm delighted that our £200m 5G scheme has explored giving passengers superb quality connections to unlock new digital experiences, brighten up journeys and boost businesses."

5G RailNext is part of the UK Government's £200m 5G Testbeds & Trials Programme, which aims to maximise the opportunities for UK businesses, including SMEs, to develop new 5G applications and services for both domestic and global markets.