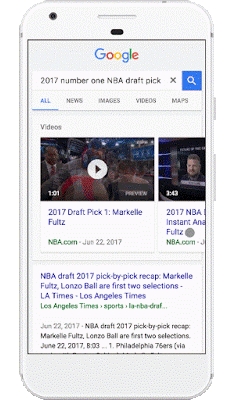 Google is changing the way that video results are displayed on mobile. The tech giant is rolling out six-second silent preview clips on Search to help people decide whether they want to watch a suggested video.

The feature will display the previews on video results in the video carousel, and will work on the majority of videos uploaded to the internet – not just those uploaded to YouTube. These previews are stitched together by a machine learning algorithm, which decides the parts of each video most suitable for preview.

“Whether you’re trying to learn some new salsa dance steps or you’re stuck on the side of the road trying to change a flat tire, and need a video that uses the tools you have on hand, you now have access to video previews directly in search results, giving you a better idea of what you’re about to watch before you tap,” said Prashant Baheti, product manager at Google, in a blog post.

Previews will initially only play on a wi-fi connection, but users can enable previews on mobile networks or opt out of the feature completely via the settings menu in the Google app or Chrome on Android.

Google says the introduction of video previews is the next evolution of the Featured Snippets for video it rolled out earlier this year. Though, unlike those, Google is only rolling out video previews to the Android Google app and Android Chrome.