Google: “The centre of gravity is shifting, wearables are getting more capable” 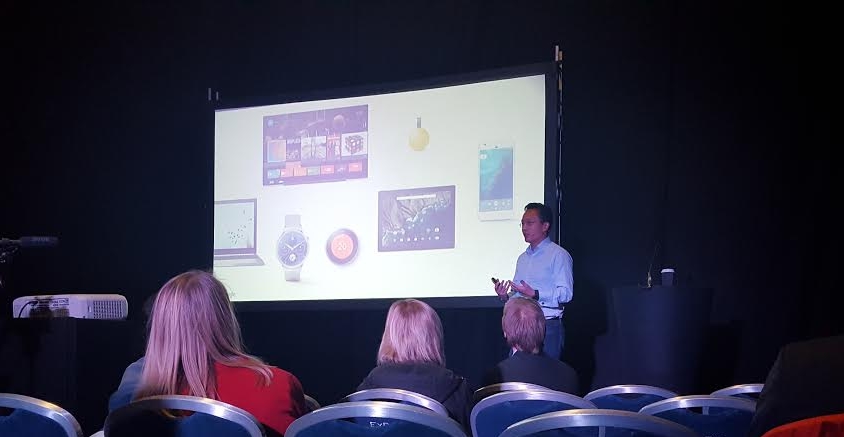 According to a YouGov survey back in 2015, there are 7.4 connected devices per household and it is believed by Frost & Sullivan that there will be close to 80bn connected devices by 2020 – a number set to grow to 120bn by 2025. But where does the wearable fit into this connected world?

A wearable can come in all shapes, forms and sizes – the device just has to be ‘smart’ and worn on your body to be identified as such. It can be a watch, a headset, a bracelet, glasses, and more. Despite the continued rise in adoption of these wearables, the ability of the devices has not yet scratched the surface – at least that’s what Google developer advocate Hoi Lam thinks.

“What we are seeing, instead of a single device, is a convergence of devices. We’re seeing a constellation of devices all acting together,” said Lam, speaking at the Wearable Technology Show. “Today, the gravity of the constellation is around a mobile device… That centre of gravity is shifting and wearable devices are getting more capable going forward.”

Got the whole world on your wrist
Lam believes that this centre of gravity is shifting because there is a great deal that wearables, predominantly smartwatches, are capable of.

In becoming a person’s key authentication device, the wearable could eventually replace the contents of a wallet – replacing cash, cards, and even going as far as replacing keys.

Lam hopes that “One day you can just leave all that behind and use your wearables to pay.”

In addition, to become a knowledge base, virtual assistants have to become more helpful and provide more relevant information.

Google Assistant is already available on Android Wear – but it doesn’t yet do what people require it to do, according to Lam.

“And not just about asking, but also the other way as well, in terms of having highly relevant feedback and information coming to you.”

Finally, the wearable has the potential to become the remote control – the centre point – of the smart home.

“The smart home of the future is not about surrounding yourself with LCD screens wall-to-wall etc,” said Lam. “It’s about being able to be in control of your environment just from your wrist. So you don’t need to go to a place and find where the control panels are, you should just be able to either talk to your watch or be able to access the switch right from your wrist.”

This, however, will require a lot more work and effort from all sides of the connected and IoT spectrum, and not just from wearables, Lam warned. But, he remained optimistic about the possibilities of permitting your guests ‘to add to the playlist that you have at a house party’ or enabling a nanny or a cleaner ‘to access certain facilities within your house’ from your wrist.

Importance of ad placement
Despite the growth in adoption of wearables, app developers must continue to work to retain users, and a key in retention is the placement and the number of ads presented to a user.

The way that ads are received by the user differs depending on the platform or device they are operating – as the device gets smaller, people become less tolerant.

“On the desktop, you tolerate it. You can have half a page of ads, it’s fine, you’ll just read the article on the other side – it’s completely fine,” said Lam. “On mobile that tolerance is a little bit less – you can still put your ads there, but just be careful that they don’t jump around too much and don’t take up too much of the screen real estate. On wearables, it really needs to be actionable right now for it to be on the notification and this is borne out by users’ reaction to notifications.

“A lot of the app developers will see that if they send too many notifications, they will get uninstalled on mobile – and we’re seeing that trend even more on wearables.”