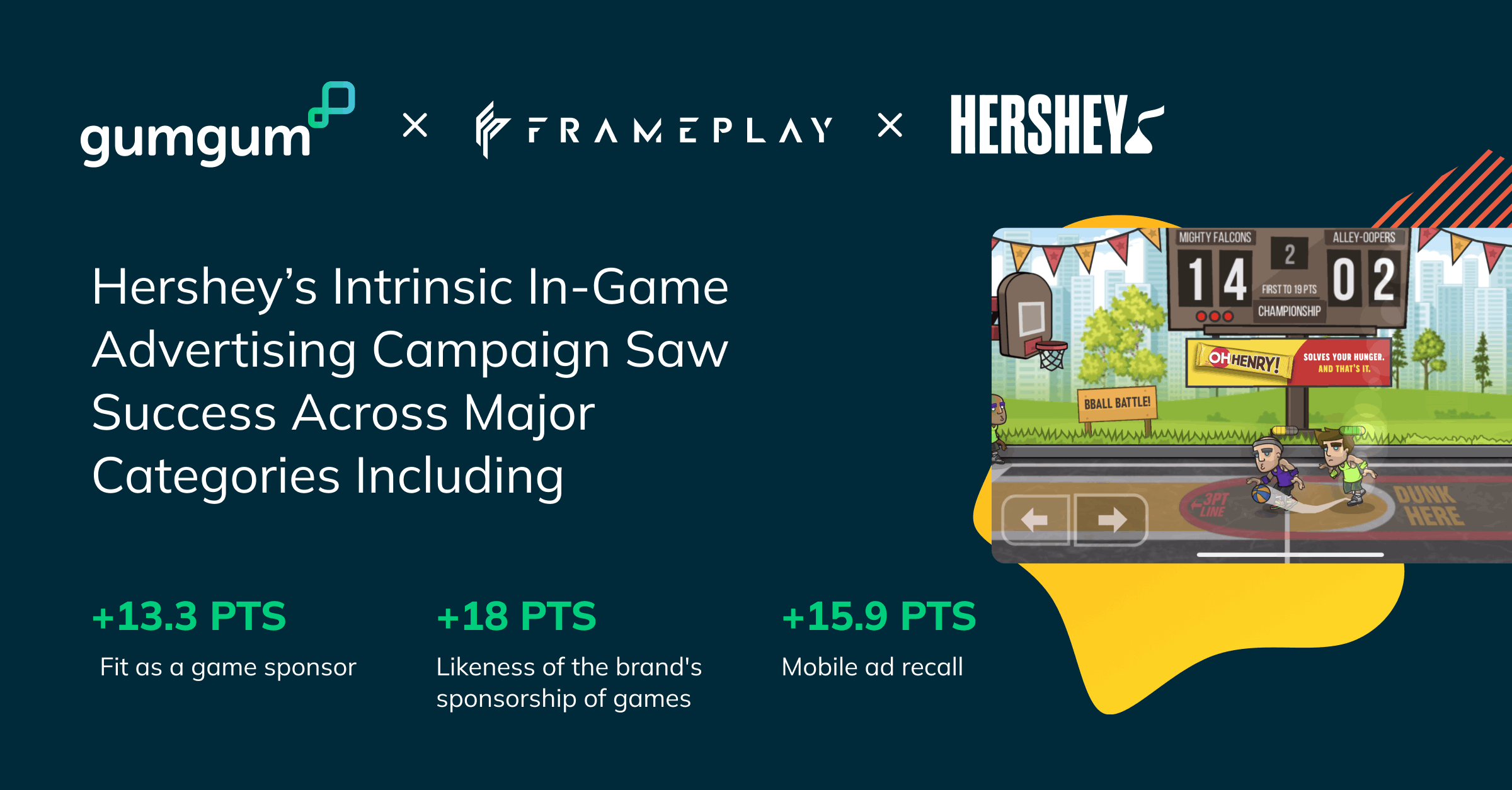 Hershey is an early adopter of the critical in-game environment to reach audiences and consumers across mobile with non-intrusive ads that blend seamlessly into a gamer’s experience. Together with GumGum, Frameplay served OH HENRY! ad creative within premium sports, simulation, racing, and casual games, targeting audiences over 18 in a six-week campaign and exceeding the original goals set by Hershey. Hershey saw success across major categories like fit as a game sponsor (13.3 points); likeness of the brand’s sponsorship of games (+18 points); and mobile ad recall (+15.9 points) – twice as high as the industry average and standard.

“There are at least 2.5 billion gamers who are immersed in virtual worlds where no ads are present and at Hershey, we wanted to find a way to reach these consumers without disrupting the gaming experience,” said Susanne Hartkorn, Associate Marketing Manager, OH HENRY! at The Hershey Company. “By partnering with GumGum and Frameplay, we were able to test out intrinsic in-game advertising, and found that the key to success is optimising the creative and making the ad as immersive as possible. This campaign unlocked a whole new segment of customers, and based on the results, we see intrinsic in-game advertising as an important strategy to meet new audiences where they are as we enter 2023.”

GumGum and Frameplay utilised Comscore to measure overall campaign performance through a brand lift study. The results of the study not only show the efficacy of intrinsic in-game advertising from a brand awareness perspective, but also proved that ads that contextually align with their environments have a positive impact on the gamer, which results in an increase in purchase intent. This also further proves that aligning ads with the environment and meeting people when they are in the right frame of mind is key to garnering attention today and in the future.

Other notable results from the campaign include:

“In-game advertising is here and it’s here to stay, offering brands the opportunity to reach gamers during the 3 billion hours of gaming played across the world,” said GumGum CEO Phil Schraeder. “Our goal with Frameplay was to help Hershey start to understand how to deliver immersive and contextually relevant advertising that optimises creative in a non-disruptive way and the results prove what we’ve been saying for years. Context and creative must be an integral part to advertising strategies that will result in increased attention, boost brand favorability and ultimately change how people view digital advertising all together.”

“The gaming audience is larger than all of the top streaming sites combined, which underscores how critical in-game advertising is for brands. It’s clear that by combining Frameplay’s platform of engaged audiences with GumGum’s high-impact ad products, advertisers can be extremely successful in reaching consumers within cinematic and interactive video games,” said Jonathon Troughton, Chief Executive Officer at Frameplay. “The early success of this campaign is crucial because it shows how intrinsic in-game advertising paves the way for both time and attention without distracting the player from the environment itself.”

Both GumGum and Frameplay will continue to pilot intrinsic in-game advertising with brands to understand the power and impact of gaming on digital advertising throughout the rest of 2022 and will be publishing more insights and results in upcoming months. GumGum will be making contextually relevant, intrinsic in-game ad units widely available for brands and agencies globally in the first half of 2023.

Please contact your GumGum representative or get in touch here to learn more, and for more information on this announcement, please reach out to pr@gumgum.com.