Origami-inspired NASA Robot Can Roam Where Other Rovers Can’t

Engineers at NASA’s Jet Propulsion Laboratory (JPL) are creating a robot that can accompany its larger rovers to other planets, and its origami-inspired design will not only enable several devices to fit in a relatively small space, but allows the robot to reach locations that would be inaccessible to normal rovers.

The Pop-Up Flat Folding Explorer Robot, or PUFFER, is capable of flattening itself out, ticking in its wheels to crawl into small spaces or through narrow passageways. The robot, which has been in testing for the past 18 months in a variety of extreme environments, is also capable of climbing up 45-degree slopes and entering spaces that would be too risky to send a larger, more complex rover.

“They can do parallel science with a rover, so you can increase the amount you’re doing in a day,” said Jaakko Karras, PUFFER’s project manager at JPL. “We can see these being used in hard-to-reach locations – squeezing under ledges, for example. Small robotic explorers like PUFFER could change the way we do science on Mars.”

The robot can be outfitted with different wheels and other body parts to help it navigate different terrain, and it has already been deployed on sedimentary rock slopes in California, at ski resorts in Colorado and on Mt. Erebus, an active volcano in Antarctica. However, the robot’s creators are hoping that the device will eventually make it to Mars, where it can search for organic molecules that may exist under overhangs, out of the path of harmful radiation.

A brothel housing four state-of-the-art sex dolls operating in Spain has been forced on the run after police began investigating the legality of the business and the property’s owner cancelled their tenancy.

According to Spanish newspaper El Pais, Lumidolls (a name which plays on a Spanish term for prostitute) began operating on 27 February, offering clients anywhere between 30 minutes and a whole evening with one of four hyper-realistic, life-sized dolls made from state-of-the-art polymers. The opening was extensively covered by the media and circulated on social media, which was in turn seen by the owner of the apartment where the business was operating.

Having recognised his property, the owner immediately cancelled the rental agreement with the business and alerted municipal police to the location of the firm. However, by the time officers reached the premises, the Lumidolls and their owners were gone, and the apartment was empty.

The business is reportedly still in operation, and has simply moved on to new unidentified premises. The Lumidolls website is still live, and customers are apparently provided with an address by a receptionist after booking a session with one of the four ‘girls’.

The growth of ad tech tracking and government surveillance has resulted in a small number of extremely dedicated privacy activists, for whom encrypted messaging services are just the tip of the iceberg. It’s presumably this audience that start-up Hushme is targeting with its ‘personal acoustic device’ that hides your speech when you’re on the phone in public.

The device comes with wireless in-ear headphones and an in-built microphone to enable users to carry on conversations as normal while their mouth is covered by a mask-like plastic frame, obscuring their face from observers.

The device also projects a variety of noises, from wind and birdsong to R2D2 beeps and Minion gobbledegook, to baffle the sound of your own speech from any potential eavesdroppers, while the person on the other end of the line hears you with perfect clarity. While the device is primarily being marketed as a privacy aid, it could also presumably be used to carry out conversations in quiet areas without disturbing people, or even enable you to talk on the phone while caring for a sleeping infant, as long as they don’t mind one of their parents looking like Bane. 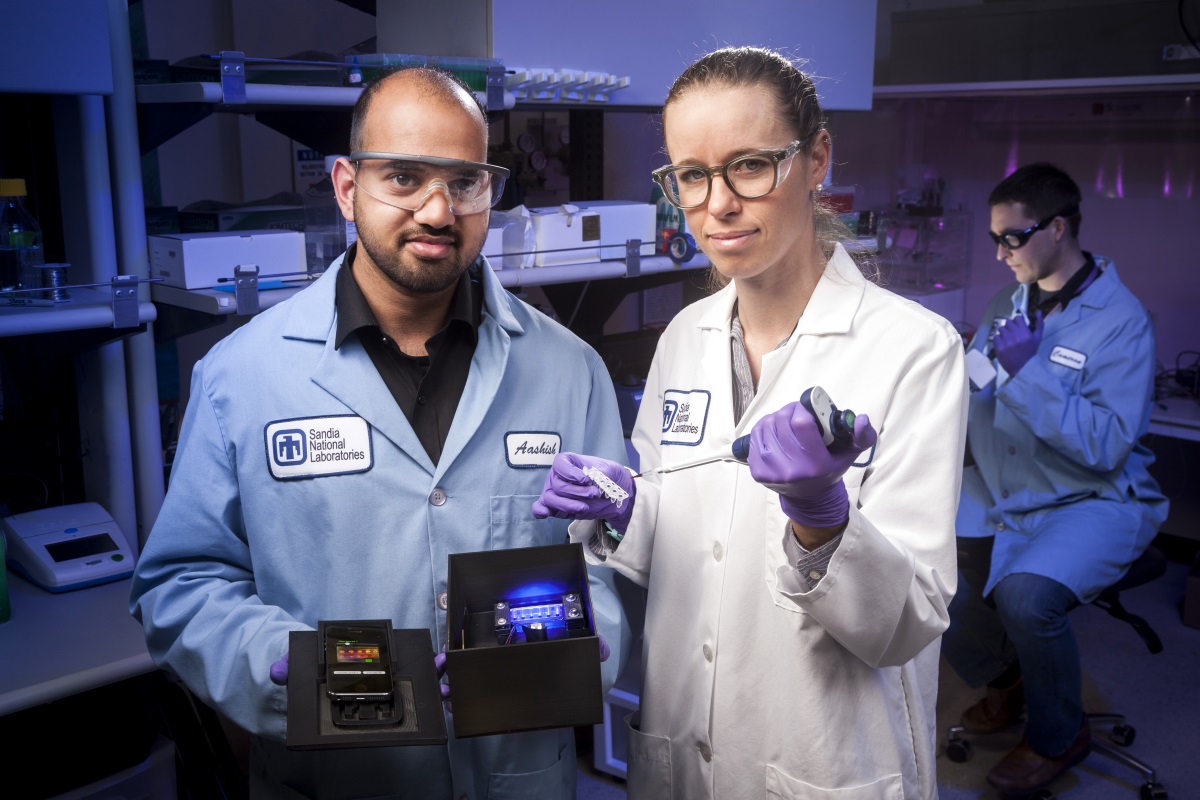 The mosquito-bourne Zika virus is relatively easy to test for in well-equipped labs, but many of the countries stricken by the disease, which can cause microcephaly in infants exposed to it during pregnancy, have under-funded and under-equipped medical facilities, especially in rural areas. That makes the work of researchers at Sandia National Labs even more important.

The scientists have developed a diagnostic test for Zika and a number of similar viruses that is smaller and cheaper than current equipment, and can even be carried out using a smartphone. Like existing tests, the system uses a process called loop-mediated isothermal amplification, where a blood sample is mixed with biochemicals and heated, causing the Zika DNA to glow. A smartphone with a dedicated app can then use image recognition technology to detect this.

“In addition to creating an app that serves as a simple interface to operate the device, we were able to adapt smartphone camera sensors to replace traditional laboratory sample analysis tools, allowing for unprecedented mobility,” said Aashish Priye, chemical engineer at Sandia National Labs and lead author of the research. “There are billions of smartphones in the world, even in developing countries, and this tool doesn’t even require the highest-end smartphone on the market.”

Protect Your Salmon With This Underwater Laser Drone

Sea lice aren’t the world’s most well-known pest, but if you’re a salmon farmer in Norway, the invasive fish parasites are a big deal, with the industry spending a collective $1bn (£800) battling against the threat they pose to commercial fish farms. Fortunately, a solution is on hand, in the form of a laser-firing underwater drone.

The Stingray drone, created by Stingray Marine Solutions, uses the latest machine vision algorithms to detect individual lice as they attach to fish within the large pens used at the farms. The device then shoots a thin laser beam at the louse, killing it but leaving the salmon unharmed. Inside the pens, which contain between 50,000 and 150,000 fish inside a mesh perimeter, a single drone can kill tens of thousands of lice a day.

The Stingray is largely autonomous, with sensors to detect environmental factors like temperature, oxygen levels and water salinity, thrusters to navigate through the pens and a buoy attached to a winch to help it be retrieved for charging. Stingrays are now in operation at over 100 Norwegian salmon farms, and have also been introduced to facilities in Scotland. The devices mean other expensive or labour-intensive treatment methods like flushing the salmon through strong currents, individually washing them or using chemicals like hydrogen peroxide can be replaced, cutting down costs for farmers.