First Robot Masseuse Gets To Work

A startup in Singapore has developed a robot trained in traditional acupoint massage designed to offer a low-cost treatment alternative for patients with chronic pain in countries where healthcare costs are high. The Expert Manipulative Massage Automation, or EMMA for short, has started work at the NovaHealth Traditional Chinese Medicine (TCM) clinic in Singapore, working hand-in-hand with human colleagues.

EMMA was created by AiTreat, a healthcare startup incubated by Singapore’s Nanyang Technological University. It has a highly articulated arm with soft massage tips that can mimic the human palm and thumb to replicate the Tuina massage technique, designed to alleviate back and knee pain.

EMMA also has advanced sensors and diagnostic functions which can measure the exact stiffness of a particular muscle or tendon. Data is collected and sent to a cloud-based AI program that computes the exact pressure to be delivered during the massage procedure. The AI can also track and analyse patient progress, providing physicians with precise data on an individual’s recovery.

“EMMA is designed to deliver a clinically precise massage according to the prescription of a qualified TCM physician or physiotherapist, without the fatigue faced by a human therapist,” said Albert Zhang, founder of AiTreat and NovaHealth. “By using EMMA to do the labour-intensive massages, we can now offer a longer therapy session for patients while reducing the cost of treatment. The human therapist is then free to focus on other areas such as the neck and limb joints which EMMA can’t massage at the moment.” 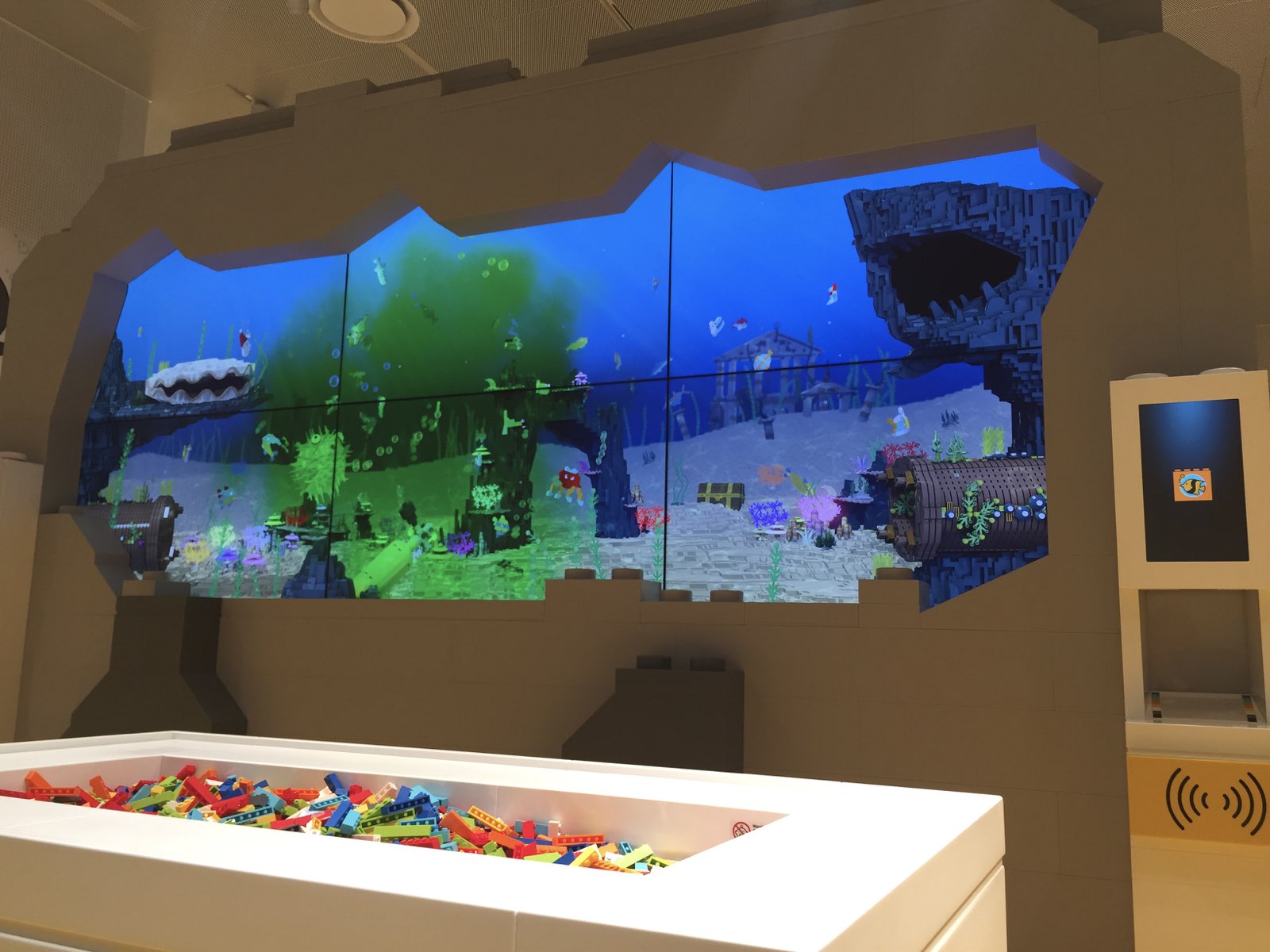 The newly-opened Lego House Museum in Billund, Denmark has unveiled an installation called ‘Fish Designer’, a first-of-its-kind underwater digital fish tank that enables Lego fans to build their own undersea creatures with physical Legos then see them come to life in the digital tank, where they interact with other creatures.

The installation uses mixed reality technology created by LA-based agency Trigger, and enables users to scan their creations at a kiosk then see them dance with an octopus, get chased by sharks and engage in three other fully-animated scenes within the fish tank. Users can choose from nine different personalities for their creatures, influencing how they interact in the scenes.

The digital fish can even be taken home afterwards, thanks to RFID visitor bracelets available at the museum. Users can download their creature onto their bracelet then access it at home to continue interacting with their creation – a 21st century version of winning a goldfish at a fair, and considerably more animal friendly.

“The Trigger team worked to create a seamless user experience where kids build fish with physical Lego bricks and then in a single magic moment, scan them, bring them to life and release them as digital fish in massive tanks with hundreds of other fish,” said Jason Yim, CEO and executive creative director at Trigger. “Mixed reality technology can be extremely complicated, and we’re proud to make it simple for Lego fans to use.”

Smart Crossing Could Help Navigate City of the Future

UK design collective Umbrellium has unveiled a new smart road concept called the Starling Crossing that uses object tracking and LEDs to generate an adaptive road surface with virutal markers that can change from moment to moment.

The pedestrian crossing is one of the most complex points of urban negotiation that almost every experiences every day, but the design has changed very little over the last 50 years. The Starling Crossing uses recognisable iconic designs that are understood by pedestrians, cyclists and drivers, but is able to react dynamically in real-time to different conditions.

The result is a road that can modify the patterns, layout, configuration, size and orientation of pedestrian corssings into order to prioritise safety at any given time. The entire road surface is monitored by cameras and embedded with LEDs that can be seen from all angles during both day and night. The design is still a concept at the moment, but a full-scale prototype has been deployed in South London to test its effectiveness in the real world. 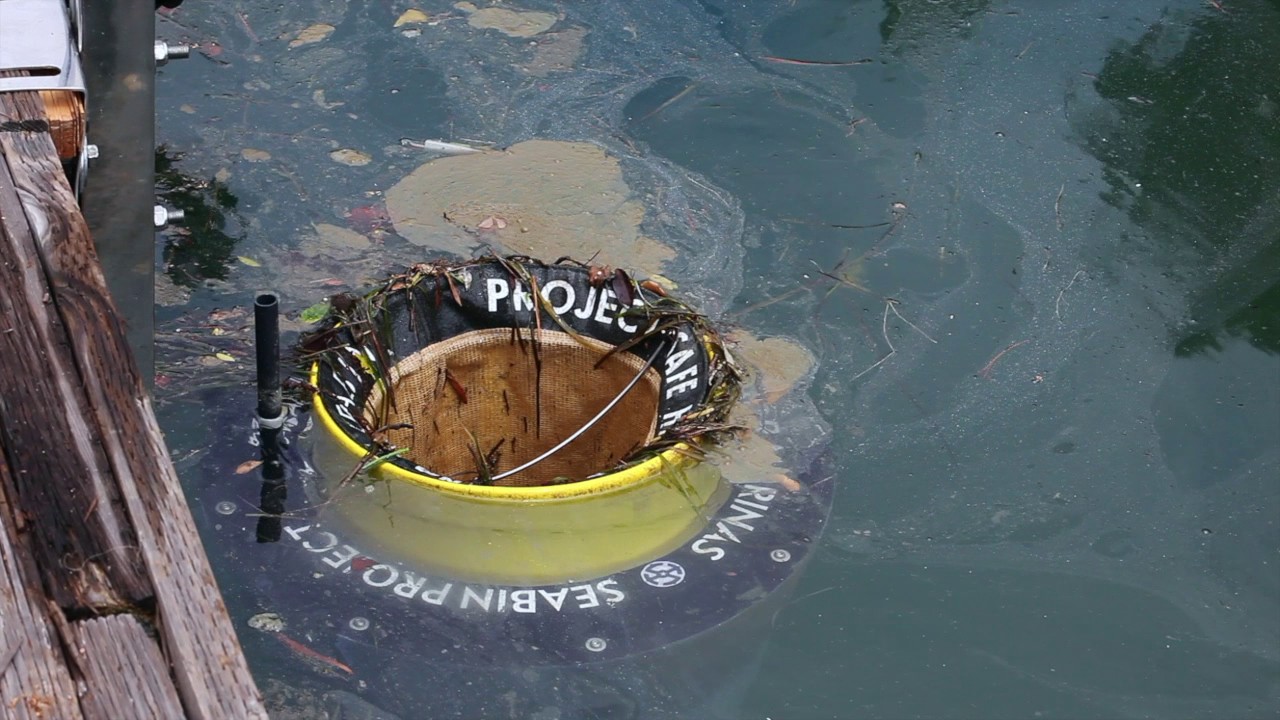 The level of plastic and waste in the world's oceans is a growing cause for concern, threatening damage to the natural ecosystem of the sea and its inhabitants. The creators of the Seabin are hoping to help in the fight back against oceanic waste with their natural fiber device that sucks in pollutants around docks and marinas, leaving the water clean and clear.

The UK's first Seabin has been installed near the base of the Land Rover Ben Ainslie Racing team in Portsmouth as part of the group's efforts towards environmental health and sustainability. The device can collect around 1.5kg of waste a day and hold up to 12kg before it needs to be emptied.

The system, which uses a large natural fiber net and a dock-based pump to collect floating debris and surface oil, was initially funded on Indiegogo but will soon go on general sale. It's also being trialled in locations including Spain's Port Adriano and the Port of Helsinki in Finland, but we could soon see the solution at every dock, marina and port along the coast.

Honda's Robotics division first raised the prospect of creating a robot designed for disaster relief at the 2015 International Conference on Intelligent Robots and Systems (IROS). Now, two years later, the firm returned to IROS 2017 to revealed what it has been working on - the  E2-DR.

While it might not be the fastest robot ever created, the android is remarkable nimble and stable for an autonomous machine, able to climb ladders, travel up and down stairs and move over uneven ground. It can even adopt a gorilla-like stance for additional stability, and at only 25cm 'thick', it can squeeze through narrow openings.

In addition, the robot is designed to work in hazardous environments, so its dust-proof, splash-proof and can operate in temperatures from -10 to 40 °C. While Honda was keen to stress that the robot is just a prototype at this stage, given the progress the firm has made in two years, it may not be long until we see it tackling dangerous situations and disasters in the real world.