Currently, there tends to be a pretty sharp divide between robots that resemble human beings in appearance and texture, and those that can perform actions like walking, carrying and even just supporting themselves. That’s because creating a soft robot with the strength to mimic natural movements has been beyond technology’s reach – until now.

Researchers at Columbia Engineering have solved a long-standing issue in the creation of untethered soft robots with lifelike actions and movements. A group in the Creative Machines lab led by Hod Lipson, professor of mechanical engineering, has developed a 3D-printable synthetic soft muscle which does not require an external compressor or high voltage equipment, unlike most synthetic muscles. The new material has a strain density 15 times larger than natural muscle, and can life 1000 times its own weight.

Previously, no material has been capable of functioning as a soft muscle due to the high actuation stress and strain that biological systems can withstand. Existing soft actuator technologies are typically based on pneumatic or hydraulic inflation of elastomer skins, both of which require external compressors and pressure-regulating equipment. The new material is a silicone rubber matrix with ethanol distributed throughout in microbubbles, and requires only a low-power electric charge to activate.

“We’ve been making great strides toward making robots’ minds, but robot bodies are still primitive,” said Professor Lipson. “This is a big piece of the puzzle and, like biology, the new actuator can be shaped and reshaped a thousand ways. We’ve overcome one of the final barriers to making lifelike robots.”

Sound Waves May Replace Biopsies When Testing for Blood Nanoparticles 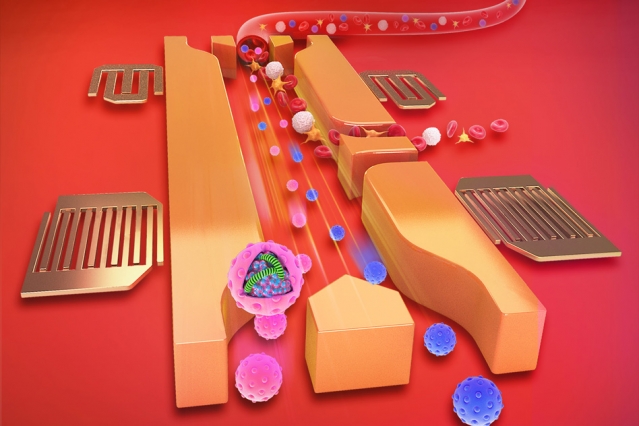 Exosomes are nanoscale particles secreted by cells which carry important messages from one part of the body to others via the blood stream. These particles can be used to diagnose problems including cancer and foetal abnormalities, but they are incredibly difficult to isolate from the blood stream, requiring cumbersome and time-consuming ultracentrifugation which often renders them unusable anyway.

Now scientists from MIT, Duke University and the Magee-Women’s Research Institute have devised a portable, economic device that can analyse blood samples much quicker, using a combination of microfluidics and soundwaves. As blood flows through tiny channels, sound waves create minute pressure nodes which guide cells off-centre in the flow, making it possible to filter out first the larger cells like red and white blood cells and platelets, and then nanoparticles like exosomes.

Unlike previous methods, which took nearly 24 hours to perform and exposed the exosomes to high centrifugal forces, this new technique takes just 25 minutes to process a 100-microliter undiluted blood sample, and only exposes the particles to force for a second or less as they are being separated.

“The new technique can address the drawback of the current technologies for exosome isolation, such as long turnaround time, inconsistency, low yield, contamination, and uncertain exocome integrity,” said Tony Jun Huang, professor of mechanical engineering and materials science at Duke University. “We want to make extracting high-quality exosomes as simple as pushing a button and getting the desired samples within 10 minutes.”

“Peel-and-go” Printable Circuits can Fold Themselves

As 3D printing becomes a more mainstream manufacturing method, researchers and industrial engineers are looking for further ways to speed up the processes involved to create objects that virtually construct themselves. Now scientists from MIT’s Computer Science and Artificial Intelligence Lab have developed a method that creates printable structures that can fold themselves up without any external force.

While scientists elsewhere have already created objects that fold when exposed to heat or moisture, this new method will enable a wider range of products to be made using this process, and enable delicate circuitry to be integrated into self-folding objects without the risks that are associated with getting such parts wet or hot.

The key to the technique is a new printer-ink material that expands after it solidifies, an unusual property that’s rarely found in materials. As soon as the finished device is peeled off the platform, the joints made from the new material begin to expand, bending the device in the opposite direction. The objects have been weight-tested by the researchers and can even return to their folded shape after being pulled apart. 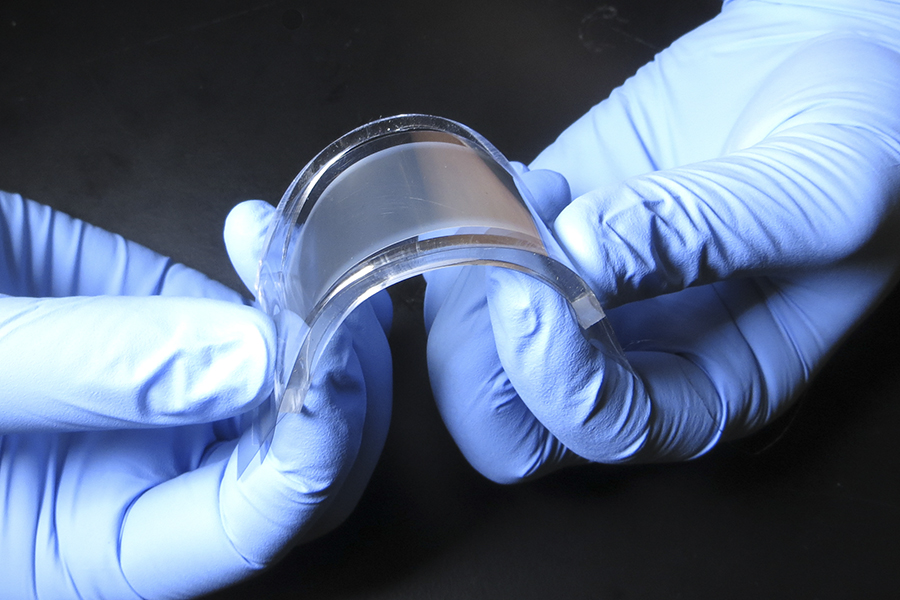 Engineers and scientists from SRI International, a non-profit research and development organisation and UCLA’s Henry Samueli School of Engineering and Applied Sciences have created a thin, flexible polymer that could prove to be the next generation of cooling technology, replacing everything from fans in laptop computers to air conditioning units.

The method devised by the researchers uses a thin polymer film that transfers heat away from its source, such as a battery or processor, to a ‘heat sink’, alternating contact between the two using an electric current. The flexible nature of the device means it can easily be integrated into curved devices or those with moving surfaces, and while the engineers behind it are initially hoping to apply it to mobile and wearable electronics, it could be used in robotic systems or devices designed to keep humans from overheating.

“We were motivated by the idea of devising a personalised cooling system,” said Qibing Pei, professor of material science and engineering at UCLA and the study’s principal investigator. “For example, an active cooling pad could keep a person comfortable in a hot office and thus lower the electricity consumption for building air conditioning. Or it could be placed in a shoe insole or in a hat to keep a runner comfortable in the hot Southern California sun. It’s like a personal air conditioner.”

App-controlled PowerUp Dart is the Paper Airplane of Your Dreams

If your experience with paper airplanes is limited to idly folding up a piece of A4 into a rough plane shape and sending it drifting across a room, you may be surprised at just how advanced they can get. Now PowerUp Toys is taking paper planes to the next level with its latest creation, the Dart.

The company has already run two previous crowdfunding campaigns for app-controlled paper airplanes, one of which included a live-streaming camera enabling users to fly from the plane’s point-of-view. The Dart upgrades their design, enabling pilots to do aerobatic tricks like loop-the-loops, barrel rolls and vertical climbs.

The device is seeking crowdfunding on Kickstarter and provides users with a simple guide to aerobatic stunts, as well as multiple paper designs that work with the kit and optimise it for specific types of flying. The Dart can reach speeds of up to 25mph and, unlike some consumer drones, doesn’t need to be registered with the FAA thanks to its small size.