Scientists and engineers at Harvard’s John A. Paulson School of Engineering and Applied Sciences (SEAS) and Wyss Institute for Biologically-inspired Engineering have been working on various iterations of the RoboBee for a while now, creating a multipurpose robot of tiny size that can adapt to various surfaces. Now, a new version of the device that combines a number of advances has been created to showcase just how far they’ve come.

The new RoboBee can fly and swim through water as well as landing safely on solid ground, and in the researchers’ latest advancement, it is even capable of diving into water and then emerging again with no change in its flight effectiveness. This newest change comes from floating devices that enable the microrobot to stabilize on the water’s surface before an internal combustion system ignites, propel it back into the air.

“This is the first microrobot capable of repeatedly moving in and through complex environments,” said Yufeng Chen, a graduate student at the Microrobotics Lab at SEAS and first author of the paper on the RoboBee. “We designed new mechanisms that allow the vehicle to directly transition from water to air, something that is beyond what nature can achieve in the insect world.”

The researchers had to combine theoretical modelling and experimental data to find the correct combination of wing size and flapping rate that would enable the RoboBee to operate repeatedly in both air and water. In addition, the robot’s small size meant that the surface tension of water was more than 10 times the weight of the RoboBee and three times its maximum lift, meaning buoyant outriggers were required to break the surface after it entered the water. 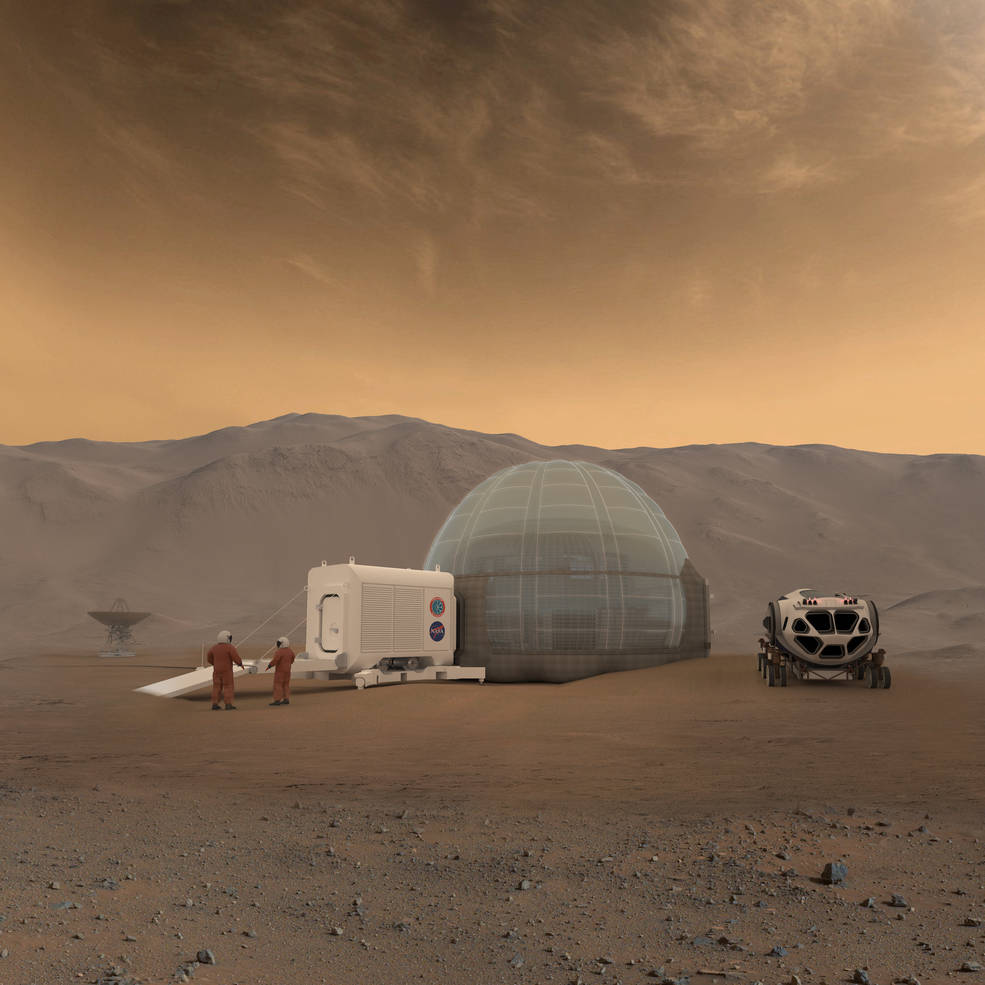 More than two years ago, the Innovation Lab covered a prize-winning concept for a Martian habitat that would use 3D printing to create a ‘space igloo’ on the red planet. Now, that concept is moving forward, as NASA announces plans to test the inflatable Mars Ice Home design aboard the International Space Station (ISS).

If it’s to be successful, the concept, designed by Clouds Architecture Office, Space Exploration Architecture (SEArch) and NASA’s Langley Research Center, needs to protect astronauts from the extreme environment of Mars, including exposure to radiation due to Mars’ thinner atmosphere. To test this, materials for the Mars Ice Home will be sent into space as part of the MISSE-11 resupply mission.

Once in space, materials for the habitat’s wall assembly will be flight tested for an entire year, and samples will even be mounted on the station’s exterior to see how they respond to long periods of exposure. After a year, these materials will be returned for testing by scientists on Earth to see how they have held up to the harsh conditions of space.

Since the concept design was awarded its prize, Clouds AO and SEArch) have been working with Langley engineers to ensure it is fit for purpose should it finally reach Mars. The design has been updated with a thicker ice wall, which tests suggest may be even better than aluminium, the standard design material, when it comes to blocking radiation from galactic cosmic rays. The ice walls would also allow natural light in and could be constructed to water sourced directly on Mars.

If the idea of having a connected device that controls everything from your lighting to door locks isn’t futuristic enough for you, how about one that seemingly defies gravity? That’s what design firm 1-Ring are offering with their Moon smart hub, a sensor-packed control centre with a levitating 360° camera orb.

The device, which has already blown past its crowd-funding goal on IndieGoGo, has a wide range of functions jammed into its ominously-floating form. The camera has wireless charging, so never runs out of power as it hovers, and can rotate 360°, detecting noise, voice commands or motion around it. The Moon includes a speaker and microphones for use as a voice chat hub, can be operated remotely by an accompanying app, and automatically uploads images and footage to cloud storage services.

Sensors in the Moon monitor the temperature, light levels, humidity and even carbon dioxide levels, and it can integrate with connected devices using wi-fi, Bluetooth, infrared and more. It’s compatible with Amazon Alexa and Google Home, and support for the Apple HomeKit is planned, so this single hovering sphere could soon be in charge of your entire smart home. 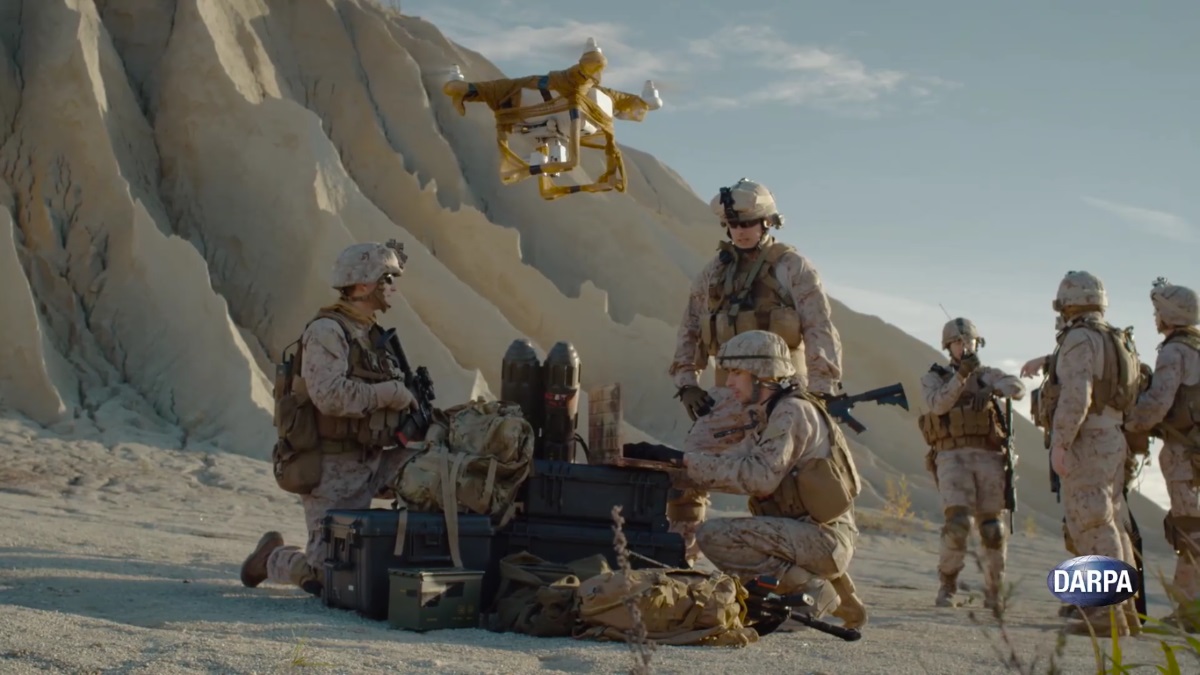 The US Army's Defense Advanced Research Projects Agency (DARPA) is looking for robotics developers to come up with creative solutions that will let swarms of drones fly and crawl alongside small infantry units while in battle, helping them carry out objectives.

The branch of the US Department of Defense posted an overview of its Offensive Swarm-Enabled Tactics program (OFFSET), requesting technology companies who could work alongside the Army and military contractors to develop swarms of up to 250 robots that could accomplish diverse missions in complex urban environments. DARPA carries out "swarm sprints" every six months to push forward their technology in a variety of areas, from human-swarm interaction to drone autonomy.

"The swarm sprints are empirical experiments designed to accelerate our understanding of what swarms can do in urban environments," said Timothy Chung, program manager for DARPA's tactical technology office. "By having swarm sprints at regular intervals, we're able to ensure that we're keeping up with the latest technologies - and are in fact helping inform and advance those technologies - to better suit the needs of the OFFSET program."

Sloppy eaters rejoice – this fork has noise-cancelling technology built in

International travel can be rife with culture clashes that cause uncomfortable moments, but even we wouldn't have predicted a tech solution for this particular problem: a Japanese company has designed a smart fork that uses noise-cancelling technology to drown out the sound of people slurping ramen as they eat it.

According to Nissin, the Japanese instant noodle giant, the slurping noise associated with ramen and other noodles can be a source of "cultural friction", and so it has designed the Otohiko, which can recognise when the sound is made then triggers your smartphone to play ambient noise which will cancel it out.

Nissin apparently collected huge amounts of data on slurp noises when designing the Otohiko, and used machine learning to identify the key elements of the sound, which may explain why the device will retail for ¥14,800 (£99) if it succeeds in its crowdfunding campaign, which is looking to get 5,000 preorders before manufacturing begins.