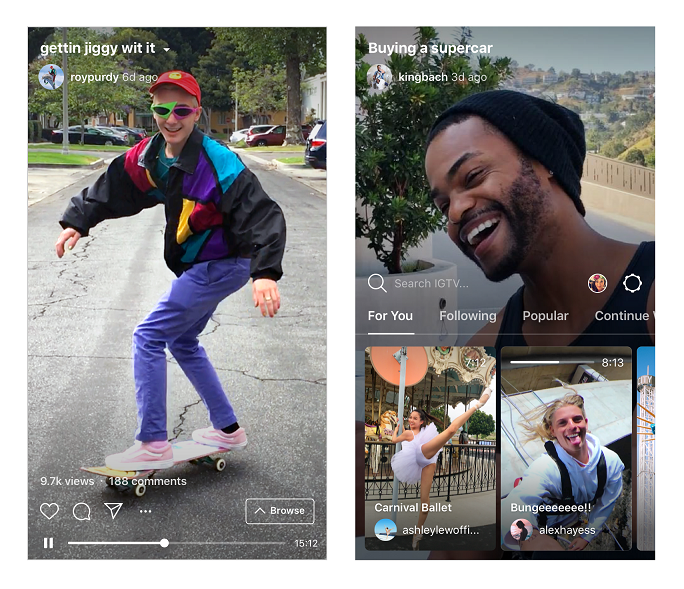 Instagram is going head-to-head with YouTube with the launch of IGTV, which will allow Instagram users to upload full-screen, vertical videos of up to one hour in length. That compares with a current maximum of 60 seconds in the Instagram feed, or 15 seconds in Instagram Stories.

IGTV will be accessible via a dedicated app, and from a button on the Instagram homescreen. Launching the new platform at an event in San Fransisco, Instagram also revealed that it has now passed the 1bn user mark. There's no word on whether IGTV will contain ads.

IGTV starts playing as soon as the user opens the app and Instagram has made it easy to discover new content. Swiping up enables users to switch ‘For You’, ‘Following’, ‘Popular’ and ‘Continue Watching’. Users can also like, comment and send videos to friends.

Videos will be housed in dedicated channels, with each creator having their own channel, as on YouTube. When someone follows a creator on Instagram, their IGTV channel will show up for them to watch, and anyone can be a creator.

“Instagram has always been a place to connect with the people who inspire, educate and entertain you every day,” Instagram co-founder and CEO Kevin Systrom wrote in a blog post. “With your help, IGTV begins a new chapter of video on Instagram. We hope it brings you closer to the people and things you love.”

IGTV will be rolling out globally over the next few weeks on Android and iOS. It launches with a batch of content from some of its best-known creators including Lele Pons (@lelepons), who currently holds the title of the Number 1 digital creator on Instagram with an audience of over 25m followers. She has launched a cooking show on IGTV. Selena Gomez (@selenagomez), Instagram's most-followed star has debuted an exclusive IGTV video entitled A Love Story. And Virgil Abloh (@virgilabloh) the Louis Vuitton menswear artistic director, has launched an exclusive IGTV documentary of his work at the fashion house.

You can see the launch promo vidoe for IGTV here.