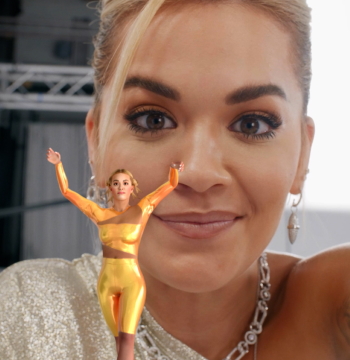 EE has followed up the debut of its Rita Ora-fronted iPhone 12 Pro campaign with the launch of an immersive augmented reality (AR) experience featuring the singer-songwriter dancing.

The Mini AR Rita, developed alongside Aircards, brings Rita Ora into the homes of UK smartphone users via web-based AR. The mini avatar of the singer dons the same gold, two-piece bodycon outfit seen in the EE ad and provides users with the singer’s real-life performance, as captured by EE over 5G.

“As an artist, you’re forever looking at new ways to give back to your fans. Things that get them genuinely excited,” said Rita Ora. “Filming the live AR gig over EE 5G was unlike anything I’d done before, and it allowed me to push myself and enter a whole new world of performance. I wanted my fans to be able to experience that for real too, so I hope they love mini AR Rita as much as I do.”

In EE’s ad with the singer – which is running across Twitter, Facebook, Instagram, Snapchat, TV, and video on demand – Rita Ora’s AR avatar performs her hit single ‘Let You Love Me’ while dancing through London’s iconic skyline.