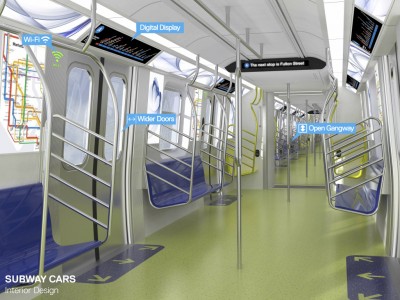 Designs for the new cars were unveiled at the Transit Museum in Brooklyn this week, where Governor Cuomo outlined a five-year, $27bn (£20.5bn) plan that will see the new cars made publicly available as soon as possible.

"New York deserves a world-class transportation network, worthy of its roles as the heartbeat of the 21st century economy," said Governor Cuomo. "The MTA design team developed a bold and visionary reimagining of the quintessential commuter experience, incorporating best practices from global transit systems, and focusing on our core mission to renew, enhance and expand."

Of the new cars, 750 will feature an 'open car end' design that replaces the traditional door between cars with an accordion-like corridor, creating longer open spaces that enable greater passenger flow and increase capacity. The cars will also feature wider doors, allowing passengers to alight much more quickly and reducing dwell times in stations.

Also announced were key architectural elements for renovations of 31 subway stations throughout the New York metro area, which will include enhanced lighting, digital signage with real-time updates and improved wi-fi and mobile connectivity. The first three stations to be renovated, Prospect Avenue, 53rd Street and Bay Ridge Avenue, were confirmed as part of the announcement.