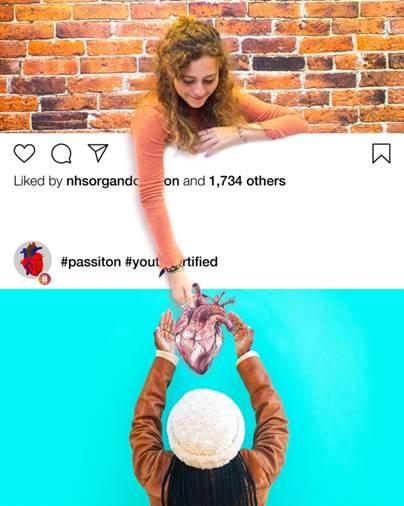 NHS Blood and Transplant has launched a campaign on Instagram and Snapchat to promote the upcoming law change for organ donation, which will see England move from an ‘opt in’ to an ‘opt out’ system later this year.  Once the law change comes into effect, anyone over the age of 18 will be considered to have agreed to become an organ donor when they die, unless they have recorded a decision not to donate, or are in one of the excluded groups.

The social activity is part of the organisation’s ‘Pass It On’ campaign, which aims to raise awareness of the law change across the population. A recent survey has shown that only 37 per cent of 16 to 17-year-olds were aware of the upcoming change in the law.

The social campaign features creative developed partly by a team of five young people aged between 16 and 21, who took part in a paid Hothouse Week at NHS Blood and Transplant’s partner agency, 23red. There they were immersed into agency life and given the live brief of the ‘Pass It On’ campaign.

The creative includes a Pass It On heart video, in which different versions of a heart (emoji, felt, embroidered, illustrated, graphic) are passed in and out of screen between different young people. The heart evolves from an abstract emoji to become a detailed, anatomical beating heart. The different hearts represent the core idea: everyone has the potential to be an organ donor. The heart was chosen as one of the most recognisable organs, as well as a symbol of love and compassion.

A static representation of the Pass It On heart video shows young people passing a heart across different social posts to represent everyone having a gift to give. The execution also signifies the community of young people sharing the change in law message across social platforms.

There are also social posts and posters with the copy ‘9 lives, 2 minutes, 1 decision’ – both illustrations and fabric versions – that demonstrate the potential to save multiple people and the ease with which you can register to be an organ donor (‘too much effort’ was cited as a key barrier amongst this audience). The ‘1 decision’ prompts action and also empowers the young person to make a choice about whether they would like to be an organ donor – a key theme of the Pass It On campaign.

“We want as many people as possible across England to know that the law around organ donation is changing and understand what this means for them,” said Andrea Ttofa, head of organ donation marketing at NHS Blood and Transplant. “We want people to have access to the facts, know that they still have a choice, and the importance of sharing their decision with family.

“From our research and public surveys, we know that young people are less likely to be aware of the law change and less likely to read or engage with traditional media. We knew that we had to be creative and think differently in order to reach people from this age group, and what better way could there be to do this, than by asking young people to design and create the content themselves.

“We were so impressed with how quickly the young creatives got on board and responded to the brief, the enthusiasm and commitment they showed throughout the process, and the quality of work they produced. We hope they will be equally proud that this valuable piece of work will help increase awareness and understanding, and hopefully help us save more lives.”