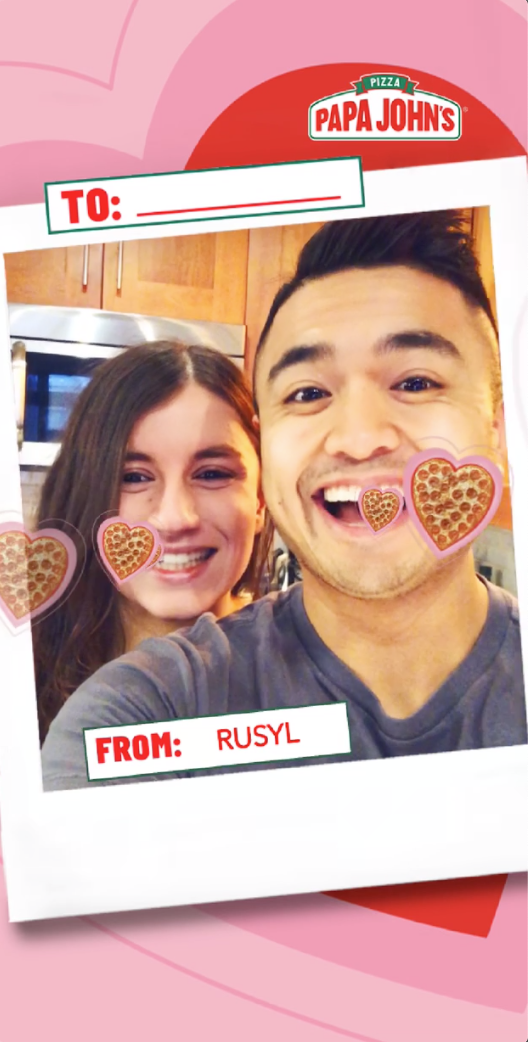 Papa John’s is promoting its Valentine’s Day heart-shaped pizza in the US with a Snapchat AR (augmented reality) Face Lens that enables users to order pizza directly from the Snapchat app.

The pizza chain ran an identical promotion with Snapchat last year, with impressive results. More than 25 per cent of Snapchatters who swiped up on the Papa John’s Lens went on to buy a Valentine’s Day pizza. 60 per cent of Lens views unlocked with the Snapcode were from unique users, and overall, the campaign led to a 6 per cent lift in ad awareness among Papa John’s customers.

This year, the Lens will be available to Snapchatters across the US in the Lens Carousel and via Snapcode. The Lens incorporates Snapchat’s Shoppable AR tech. Users can tap the ‘Order Now’ button on the Lens, or swipe up on a Papa John’s Valentine’s Day ad, to order a Papa John’s heart-shaped pizza.

The Valentine’s Day Lens and heart-shaped pizzas are available in all US Papa John’s locations now, until 16 February.

Augmented reality is becoming an important part of the Snap offering. The company says that, on average, over 75 per cent of its community engages with AR every day. As of the end of Q4 2019, over 735,000 Lenses had been created by the Snapchat community through Lens Studio, up from over 600,000 at the end of Q3 2019.

Lenses made via Lens Studio now make up over 20 per cent of the total Snaps sent every day with a Lens, with top-performing Community Lenses reaching billions of views on Snapchat. And 0n New Year’s Eve, more than 200m people engaged with AR on Snapchat over 13bn times, up from 9bn the previous year.