Salon offers ad blockers a choice: view ads or be used to mine cryptocurrency 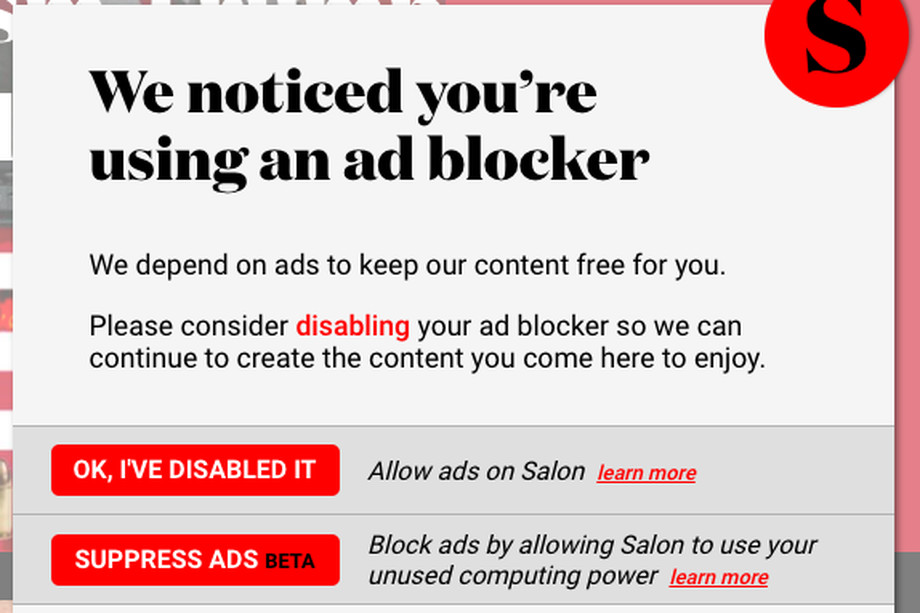 In an effort to combat the issue of ad blocking, current affairs website Salon is testing an alternative to traditional digital advertising - using visitors' computers to mine cryptocurrency.

The publisher is testing an system where users who visit the site with an ad blocker turned on see a prompt asking them to either disable their blocker or choose a 'suppress ads' option which will "use your unused computing power".

According to the Financial Times, which first reported the story, the latter choice will use a JavaScript-based mining tool from Coinhive to mine the cryptocurrency Monero, enabling Salon Media Group to recoup the revenues lost from its reduced pool of ad viewers.

As cryptocurrencies become increasingly popular, the computing power needed to generate new 'coins' is becoming a growing concern, and 'cryptohacking' has become a worrying new trend to the extent that Opera's latest browser update includes protection against your computer being used to mine without your knowledge.

Salon is far from the first website to take this approach. Last year, The Pirate Bay admitted to secretly adding Coinhive integration, while hackers have planted mining malware on a number of other sites. Cryptocurrency mining scripts can consume huge amounts of computing power as they run intensive calculations to generate new currency, slowing performance and draining battery power at an accelerated rate, especially on mobile.

Salon's decision may have been influenced in part by the launch of Google's latest version of Chrome, which includes an ad blocker designed to ensure that ads served within the browser meet certain criteria.