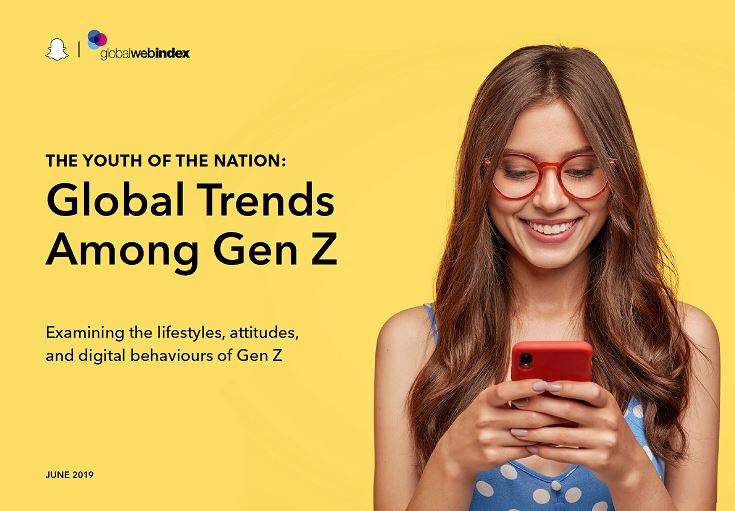 Snap has released the findings of two global studies designed to help marketers better understand and engage with Gen Z (13-22 year old) consumers. A study with JWT looked at how they creatively express themselves online, while a second study, conducted with GWI, looked at how they differ from older generations.

Snap & JWT Intelligence study
This study, titled ‘Into Z Future: Gen Z, the new Super Creatives”, was carried out by Wunderman Thompson’s research unit, Sonar, who surveyed over 1,200 people aged 12–22 in the UK and the US in May 2019.

Over one in four Gen Z have ‘hacked’ or adapted an app or website features to do something that isn’t typically available, such as using a picture collage app or app to add music, separate from the app they are posting with.

When asked about digital creative tools that Gen Z use, Snapchat Creative Tools were the top-ranked tools to create art or edit photos, ahead of Instagram Creative Features, VSCO, Photoshop, and iMovie.

The study also found that, compared to all apps tested (YouTube, Instagram, Facebook, Twitter, Tumblr and TikTok), Snapchat was the top app among Gen Z for creating videos or images; sharing videos or images they’ve created; communicating with friends; sharing moments throughout their day; and posting what they’re doing with their day using text, images, or video. The study, as noted earlier was commissioned by Snap.

“We have been studying Gen Z since 2012,” said Lucie Greene, worldwide director of JWT Intelligence at Wunderman Thompson. “In many ways they are one of the most revolutionary consumer cohorts to date, disrupting radically different notions of gender, brand, politics, and questioning everything in the world around them.

"This group has also grown up with not only digital tools, but an entire universe of internet references to draw on. As such, they’re using creative tools to express themselves in new sophisticated ways, but also using them to connect with others, affect causes they care about, and make money. Their non-linear approach to creativity, whether its combining sound, with illustration, or video, is already so advanced. This group is set to transform the creative talent space.”

It found that Gen Z are the first generation to be considered true digital natives, born into a high-tech world with the internet in easy reach. For Gen Zs, their smartphones are absolutely central to their lives. This group spent an average of 4 hours and 15 minutes per day on their mobile device by the end of 2018 – the longest of all generations. This represents an increase of 1 hour and 13 minutes per day compared to 2015.

The need for acceptance and belonging to a community are key characteristics for Gen Z, and according to a previous GlobalWebIndex and Snapchat study, 57 per cent of respondents said say they feel more insecure without their mobile phone than their wallet.

Mobile (43 per cent) is ahead of TV (27 per cent) for devices used by Gen Z to watch subscription services such as Netflix. Additionally, watching TV and video content is the second most important reason for using the internet amongst Gen Zs, making them 20 per cent more likely than general internet users to hold this view.

“In the years we’ve been talking about them, plenty of ‘Gen Zers’ have completed their education, flown the nest and are now starting to make their own life choices as consumers,” said Jason Mander, chief research officer at GlobalWebIndex. “However, our research finds this generation is still highly impressionable – around two in five say they are easily influenced by other people’s opinions and nearly three quarters say it’s important to feel respected by their peers. In particular, Gen Z have a sharp focus on global, widespread issues that will affect their generation and indeed generations to come. With nearly half of Gen Z in the UK and US expressing they don’t feel positive about the future of the environment, the big question for brands is can they affect enough change to stay relevant to this self-aware demographic?”