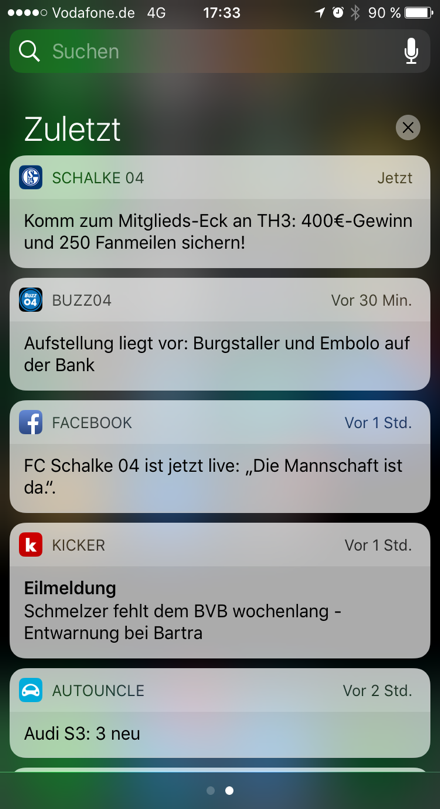 FC Schalke 04 is a football club in western Germany that plays in the country’s top division, the Bundesliga. Like a lot of football clubs, it’s been on a mission to improve the way it markets itself and engages with its fans, and towards the end of last year, started using the Salesforce Marketing Cloud as part of this process.

“It’s proved very useful for digital marketing,” Schalke’s director of strategic marketing, Björn Endter, told me when I met him at the Dmexco show in Cologne earlier this week. “It enables us to publish and distribute mobile camps very quickly and easily using push notifications and location-based services. This is pretty new in the football industry. I believe we are the first club in Germany doing this.”

It’s early in the season, but Schalke has already deployed one location-based campaign to good effect, as part of its efforts to increase membership numbers. Anyone with a ticket can get into a Schalke game, but the €50-per-season (£45) membership fee gives supporters a range of additional benefits, such as a free stadium magazine each match day; a vote for who should be on the club’s advisory board; and the right to buy tickets earlier than non-members, avoiding the risk of tickets for big games selling out.

On the first match day of the current season, Schalke geofenced its stadium, then sent a push notification to all Schalke app users who were in the stadium, inviting them to visit the Membership Desk to be entered into a sweepstake to win €400 worth of online shopping vouchers, provided by a a sponsor. The campaign saw 4,000 Schalke fans – members and non-members - enter the competition and resulted in 1,500 new membership signups.

“The issue we have traditionally had is getting into a dialogue with potential members,” Endter told me. “Most fans at a game are very engaged, but many of them don’t think about membership so we need to somehow start the discussion. The sweepstake campaign enabled us to bring a lot of people to the Membership Desk, where we had a team of people on hand to explain the benefits of membership and sign them up.”

Looking ahead, Endter said the club will use the location element to send the right messages to the right people. “When spectators come to a game, they come in through the entrance that is closest to where they are going to sit,” he explained. “Using the Salesforce platform, we can target push message to fans who are in the right part of the stadium to visit one of our partners’ outlets and not waste them on fans who are not. We can also use the platform’s segmentation capabilities to target a particular group of supporters – women aged 18-30 for example – with a money-off voucher in the club shop.

“The platform is massive but we are concentrating on a few key services. The Social Studio is very useful. This is an aggregated platform where have a single view of all our digital and social media channels. Using this, our social editor can keep tabs on everything that’s happening, and also, if someone messages one of our social channels to say they are having some sort of problem, he can send a service case to our service centre via the Social Studio and get an answer for them.”