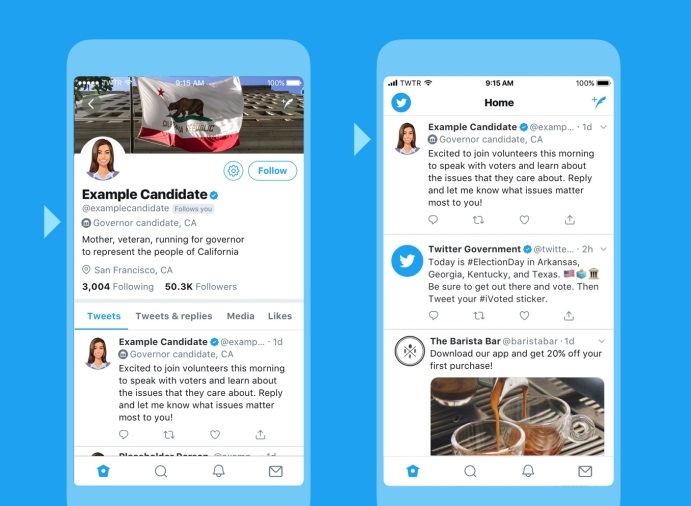 With the US midterm elections just around the corner, increased scrutiny is expected from social networks, following the fake news crisis that emerged around the 2016 US Presidential election. One US ad industry body has already announced its plans, and now Twitter is following suit with official plans for improved transparency.

The social network has revealed it plans to introduce 'election labels' to the profiles of candidates running for political office, identifying them as confirmed candidates, with information on the position they are running for and the state or district where the race is taking place. Labels will apply to candiadtes running for state Governorship, or a place in the US Senate or House of Representatives.

"Twitter has become the first place voters go to seek accurate information, resources and breaking news from journalists, political candidates, and elected officials," said Bridget Coyne, senior public policy manager at Twitter. "We understand the significance of this responsibility and our teams are building new ways for people who use Twitter to identify original sources and authentic information."

Twitter is partnering with Ballotpedia, a non-profit civic organisation to help identify the correct Twitter accounts, with labels beginning to appear from today onwards where candidates have already qualified for the general election ballot for an applicable office.

Twitter has also announced a new Political Campaigning Policy to provide clearer insight into how the firm defines political content and who is advertising political content on Twitter. Advertisers running campaign ads will have to self-identify and provide Federal Election Committee ID or a notarised form. In addition, profiles carrying political campaigns will have to adhere to stricter rules including providing a website that provides valid contact information.

Finally, political ads will include a distinct identifier, enabling users to more easily recognise them as ads and be able to know who they were paid for.

"This is just the beginning of our efforts in increased transparency for all advertising on Twitter," said Vijaya Gadde, legal, policy and trust & safety lead at Twitter. "We will continue to iterate and improve our efforts in this space and will be providing updates along the way."