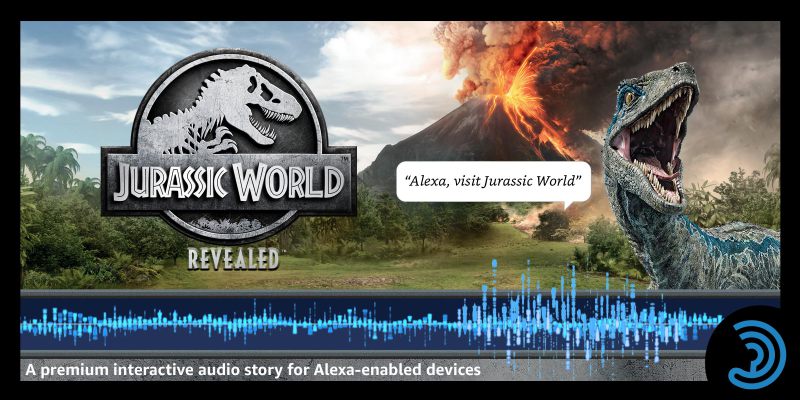 Jurassic World Revealed tells a parallel story to the events of Jurassic World: Fallen Kingdom, the latest film in the highly-successful series. With the help of fictional podcaster Janet Best, players participate in an original story by making choices with their voice as they travel to Isla Nublar, the setting of the film, and attempt to report on the fate of the dinosaur inhabitants as the island's dormant volcano awakens.

Produced by Universal and Earplay, the six-chapter voice-operated experience begins when players say "Alexa, visit Jurassic World". Players must listen, observe and interact with characters from the film series to complete the game.

"As players make choices in and around them through our high-quality audio experience, we give the audience a different window into the events happening on Isla Nublar," said Dave Grossman, chief creative officer at Earplay. "We've partnered closely with Universal to maintain an authentic Jurassic World tone, one that stays to true to the franchise and allows fans deeper inside this universe."

The first chapter of the experience can be accessed for free, with the additional five premium chapters available for $3.99 (£3.00) until 29 June, and $4.99 afterwards.

"With Jurassic World Revealed, we put interactive storytelling into the hands of fans who want the opportunity to choose where to take their Jurassic World adventure," said Chris Heatherly, executive vice president of games and digital platforms at Universal Brand Development. "Earplay has established itself as a leader in the emerging voice-operated entertainment space, and this expertise has played a key role in developing an experience that will surpass the expectations of Jurassic World fans."

"Terrence Liverpool, AVP Mobile Banking at @synchrony will be joining us at the App Marketing Masterclass #NewYork t… https://t.co/U92tl2Smhx"
13 hours ago
"James Rosewell, founder and CEO of @51Degreesmobi, explains why and how different devices can be targeted to maximi… https://t.co/GVucrpx10J"
15 hours ago
"We're returning to #Amsterdam in three days! You'll hear from experts @AppsFlyer @Outbrain @mobpros & @ironSource h… https://t.co/G3GPCcdxMT"
15 hours ago