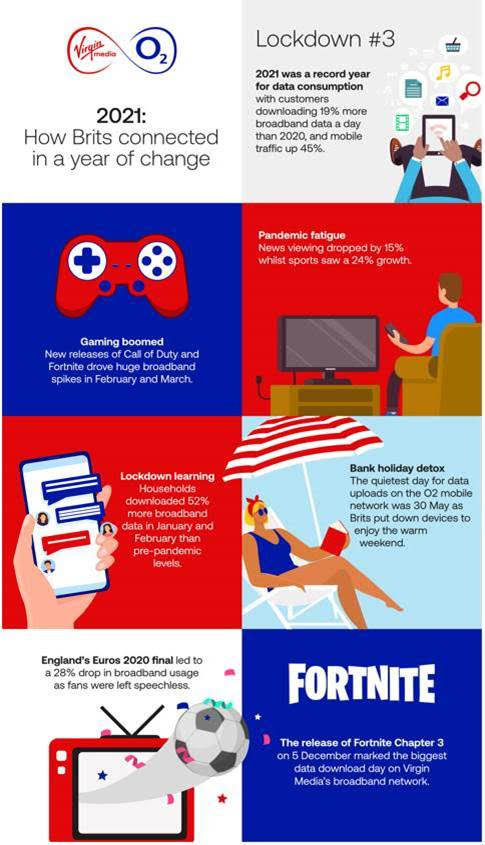 Analysis released by Virgin Media O2 today of the behaviour of tens of millions of customers between 1 January and 10 December 2021 shines a light on the UK’s connectivity habits across mobile, broadband and TV networks during the year.

In a year that saw a third national lockdown, a summer of freedom and then the emergence of omicron, the study shows that the one thing that remained constant was the nation’s reliance on technology.

Virgin Media O2 saw its biggest ever year for data use on both broadband and mobile networks, as more people than ever went online to chat, stream, share and game. In 2021, customers downloaded 19 per cent more broadband data than the previous year, with mobile traffic up 45 per cent year on year.

Gaming became the new going out
Lockdown supercharged a nation of gamers, with people stuck at home using more data than ever for gaming. New releases of Call of Duty, Fortnite and Apex Legends drove huge data use spikes in February and March, leading to some of the busiest days for broadband traffic.

But even after the nation regained its freedom in July, gaming on Virgin Media’s broadband network continued to rise with lockdown habits dying hard. 5 December marked the biggest data download day, driven by the hotly-anticipated release of Fortnite Chapter 3, while Warzone Caldera and Halo Infinite, which dropped 13 hours apart, caused evening traffic to surge to the second highest levels ever on 8 December, as gamers scrambled to get their hands on the new releases.

Pandemic fatigue
After months of doom and gloom tuning into the Government’s daily Coronavirus briefings, Brits showed increasing signs of pandemic fatigue this year, watching 15 per cent less news than a year ago.

The nation’s attention turned instead to the return of live sport, which resulted in a 24 per cent growth in Sports viewing. The busiest days of TV viewing were linked to some of the biggest sporting moments early in the year, including the India vs. England Test Cricket series, FA Cup clashes and The Super Bowl. And in early December, Premier League matches streamed on Amazon Prime drove the busiest evening peak of the year, with broadband traffic up 34 per cent on average, and 24 per cent higher than the previous year’s events.

Analysis from Virgin Media’s broadband network revealed Brits downloaded on average 18.9GB of data per day between January and February 2021 – a 52 per cent increase on pre-pandemic levels – to help them navigate home-schooling and the mandate to work from home.

The peak period for broadband and mobile download traffic shifted from 8pm in the evening to 4pm in the afternoon during lockdown in February 2021, as parents relied on streaming TV, YouTube and online gaming to distract their kids whilst juggling remote working and Zoom calls. October saw peak download traffic return to 8pm, as Brits adapted to new hybrid working patterns and resumed the usual school run.

After months cooped up at home, Brits were finally let loose in the summer, but they had no intention of putting their mobiles down. June saw users turn to Facebook, Instagram, TikTok and Snapchat more intensively than ever, with the four apps accounting for 41 per cent of all customer activity, as the nation reconnected in person and shared experiences with friends and followers.

But taking advantage of this new-found freedom took time to plan. Google app usage peaked between June and August as people searched for inspiration online, while an analysis of Google search data by Virgin Media O2 showed a 174 per cent uplift in searches for ‘Staycation’ over the last year.

The ‘Peak Netflix’ day of the year was 3 October, when Squid Game was released, with traffic to the streaming service jumping 27 per cent over previous weekends.

October was ‘Peak TikTok’ month, while the week leading up to Black Friday saw an 85 per cent increase in mobile data traffic to Amazon, with data traffic doubling on the day.

As the delayed UEFA Euro 2020 Championship kicked off, fans put down their devices to concentrate on the games. Virgin Media’s broadband network saw significantly lower levels of internet usage during England’s matches, with the biggest drop coming during the final, with customers downloading 28 per cent less traffic compared to the previous week.

“This has been another rollercoaster of a year and our digital behaviours reflect that,” said Virgin Media O2 Chief Technology Officer, Jeanie York. “Amidst another lockdown and varying restrictions, we’ve seen a sustained growth in demand for our services as customers have made a long-term shift to hybrid-working, and we’ve seen the explosion of online gaming – all of which enhance our need for ultrafast and reliable connectivity across our fixed and mobile networks.”