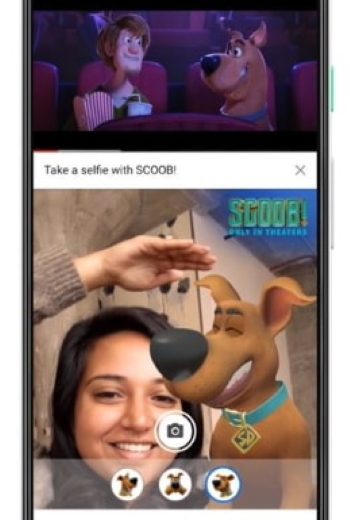 Warner Bros. Pictures has joined forces with Google to add an augmented reality (AR) element to a movie trailer launch on YouTube for the first time ever to promote the first full-length animated Scooby-Doo film, Scoob!.

The AR experience enables viewers to take a selfie with Scooby as a puppy and share this image on social and messaging apps. It is accessible to people who have updated to the latest version of the YouTube app, where users should see a ‘launch camera’ button on screen while watching the video.

“Trailers continue to play a critical role in the movie industry, but today’s digitally savvy audiences want new ways to connect with the trailer-viewing experience,” says Andrew Hotz, executive vice president of worldwide digital marketing and chief data strategist at Warner Bros. “In partnering with YouTube to create the first augmented reality movie trailer for Scoob!, viewers around the world now can become part of the trailer experience, enabling all generations of fans to take pictures with Scooby-Doo and heighten their connection to the iconic character.”

Scoob! begins with somewhat of an origin story, sharing how Scooby and Shaggy first met and how they joined Fred, Velma, and Daphne to form Mystery Inc, before presenting the gang in their adult form – as we know them best – while they embark on one of their most challenging mysteries.