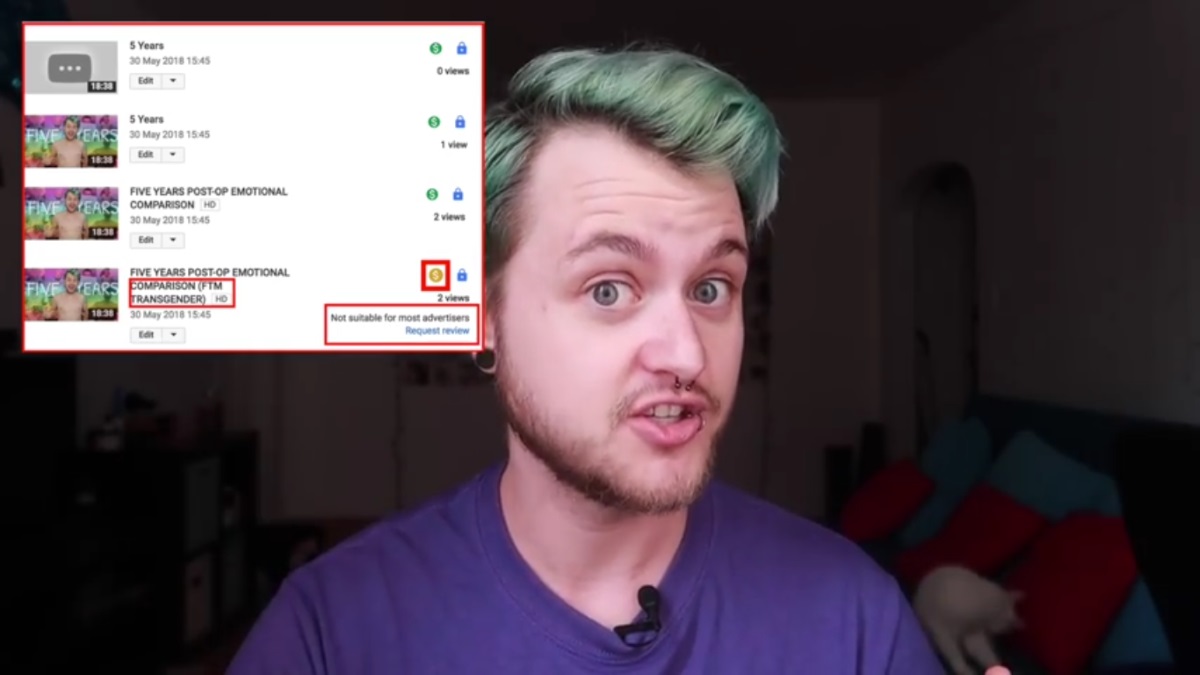 YouTube is apparently still restricting and demonetising videos by LGBTQ creators, and even running ads with anti-LGBTQ agendas against them, according to video creators who have been affected.

YouTube has a poor track record when it comes to LGBT content. In March of last year, a number of creators spoke up about their content being hidden, demonetised or restricted with age-gates, even when topics were appropriate for all ages.

YouTube responded in April 2017, saying that its system occasionally made mistakes "in understanding context and nuances" and that its Restricted Mode was not designed to "filter out content belonging to individuals or groups based on certain attributes like gender, gender identity, political viewpoints, race, religion or sexual orientation".

In late April 2017, YouTube claimed it had fixed the issue, restoring up to 12m videos that had been restricted in error, including "hundreds of thousands" with LGBTQ content. It also pledged to be more transparent about why certain topics were restricted, and the process by which they were identified and reviewed.

However, barely a year later, the issue has resurfaced. Trans creator Chase Ross claims that for the past three weeks, he has had new videos hit with age restrictions, while older videos have been stripped of ads or removed completely. He says that YouTube regularly demonetises videos with the words "trans" or "transgender" in the title, and even allows ads with anti-LGBT content to be run against videos aimed at the LGBTQ community.

Other LGBTQ video creators, especially those who deal with trans issues, have also spoken out about having videos demonetised automatically or receiving strikes on their channels for unclear or unfair reasons.

YouTube has denied that its algorithms automatically demonetise videos containing trans or other LGBTQ content. In an email to The Verge, a spokesperson for the platform said "We do not have a list of LGBTQ-related words that trigger demonetisation, and we are constantly evaluating our systems to ensure they are enforcing our policies without any bias.

"We use machine learning to evaluate content against our advertiser guidelines. Sometimes our systems get it wrong, which is why we've encouraged creators to appeal. Successful appeals ensure that our systems get better and better."

Even more worrying, several LGBTQ video creators have been notified that ads with anti-LGBTQ themes have been served ahead of their content. The organisation behind the ads, Alliance Defending Freedom, has been classified as a hate group by the Southern Poverty Law Centre. It compares homosexuality to paedophilia, advocates for the sterilisation of trans people and calls for the recriminalisation of homosexuality in the US.

This revelation comes at the beginning of Pride Month, when many corporations and organisation will be proclaiming their support of LGBTQ causes. Indeed, YouTube CEO Susan Wojcicki has championed diversity and called for anti-discrimination policies at Google, as well as noting that the principle of free speech "does not mean companies cannot take action" against speech that uses "the language of discrimination". Whether this will translate into action on YouTube's part to improve its treatment of LGBTQ creators remains to be seen.

"Tune in to our podcast with Nick Millward of @mGageLLC where we discuss #RCS - explaining what it is, how it works,… https://t.co/LvBLhDP2F2"
3 minutes ago
"Today, we're joined by our experts @tealium @Moburst and @leanplum to ensure you're ready to kick-start your market… https://t.co/ogqSt6UouF"
17 hours ago
"This week's Movers and Shakers round-up of the industry's latest hires and promotions features @magicleap,… https://t.co/4V5T5d6eCO"
18 hours ago