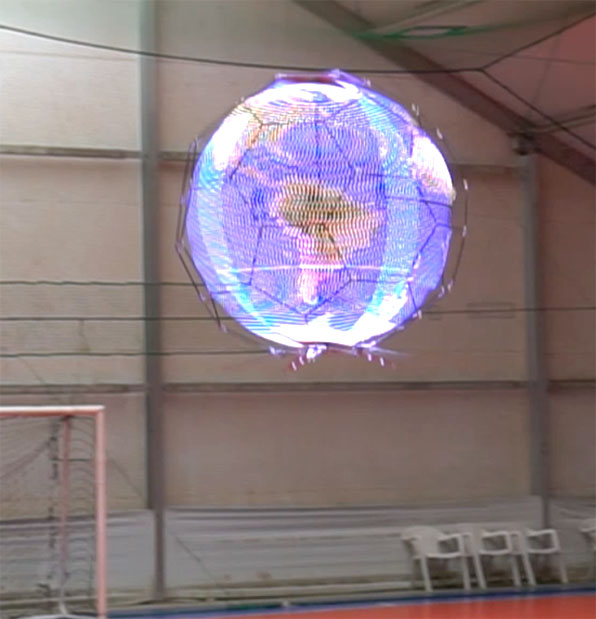 Mobile Operator Develops World’s First Spherical Drone Display
If you’re looking for a unique way to show off your latest advert, Japanese telecom Docomo has created a UAV drone that can project LED images onto an omnidirectional spherical screen, enabling it to display complex images, all while hovering in mid-air.

The device comprises of a spherical external frame, an internal LED frame with eight curved LED strips that extend from top to bottom and a drone that is fitted within the sphere. During flight, the LED frame spins rapidly on its axis, forming an afterimage effect that creates the illusion of a solid sphere of motionless LEDS.

By taking advantage of the afterimage effect, Docomo has been able to solve the problem of how to create a screen around a drone that doesn’t interfere with the airflow to the drone’s propellers, and also avoid the extra weight that a convention display would add. The drone is 88cm wide at its largest point, and weighs just 3.4kg, with the display measuring 144 pixels high with a circumference of 136 pixels.

The company is planning to commercialise the drone next year, believing it will prove popular for entertainment and messaging solutions for event venues including stadiums and concert halls. The drone will be showcased at the NTT Ultra Future Museum 2017 during the Niconico Chokaigi conference later this month.

An external artificial womb called the Biobag could one day help premature babies survive, having successfully kept eight foetal lambs alive for four weeks. The baby lambs were placed in the system at equivalent level of development to a six-month-old human foetus, and were moved onto regular ventilators after four weeks when researchers observed nearly ideal health conditions.

The research, which was published in Nature Communications, was led by Dr Alan Flake, foetal surgeon at the Children’s Hospital of Philadelphia Research Institute, with the hope of eventually developing a similar system for premature human babies. Extreme prematurity (babies born at or before 28 weeks of pregnancy) is the leading cause of infant morbidity and mortality, account for more than a third of all infant deaths.

The Biobag solves an issue that scientists have puzzled over for 50 years, creating an artificial womb that doesn’t risk fluid contamination and eliminates the chance of pneumonia in the lungs. The Biobag is made of near-sterile translucent polyethylene film, and connects to a mobile support platform that regulates temperature and pressure. The foetal lambs were covered in an electrolyte solution similar to the amniotic fluid found in the uterus, and a pumpless circuit enables their hearts to power blood flow by themselves.

“I’m still blown away, whenever I’m down looking at our lambs,” said Dr Alan Flake in an interview with The Verge. “I think it’s just an amazing thing to sit there and watch the foetus on this support acting like it normally acts in the womb…It’s a really awe-inspiring endeavour to be able to continue normal gestation outside of the mom.”

Man Arrested After Getting Into Fight with 300lb Security Robot 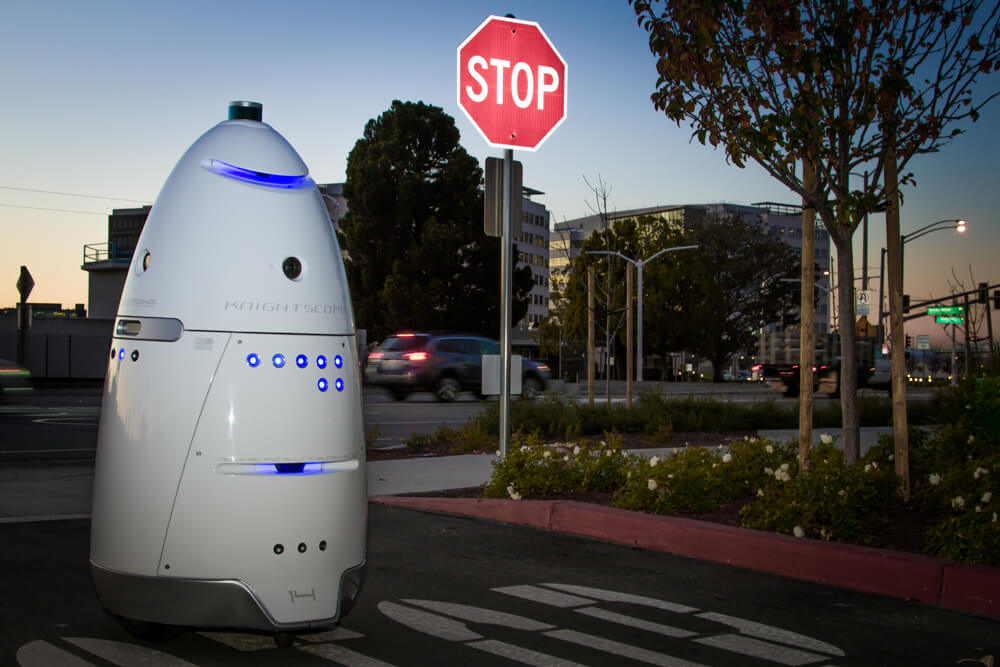 The Knightscope K5 robot doesn’t cut the most imposing frame, looking more like a cross between an advanced portaloo and a fridge-freezer than Robocop, but it still serves as an effective security guard, streaming live 360 footage to a control point as it autonomously patrols its guard area. Unless it gets tipped over by a drunk, that is.

The five foot tall, 300lb robot was on duty in Mountain View, California (the heart of Silicon Valley) when a drunk man crossed the parking lot it was patrolling and apparently objected to the droid, knocking it over in what he later claimed was an attempt to test the security of the drone. Following the incident, the man was charged with prowling and public intoxication.

“The robot did exactly as it was suppose to do,” said Stacy Dean Stephens, vice president of marketing for Knightscope, in an interview with CNET after the event. “The ‘assault’ was detected and immediately reported. The alarms on the robot sounded, the suspected attempted to flee the scene and was detained by one of my colleagues and me until the Mountain View Police arrived.”

New App Alerts You of White Collar Crime in Your Area 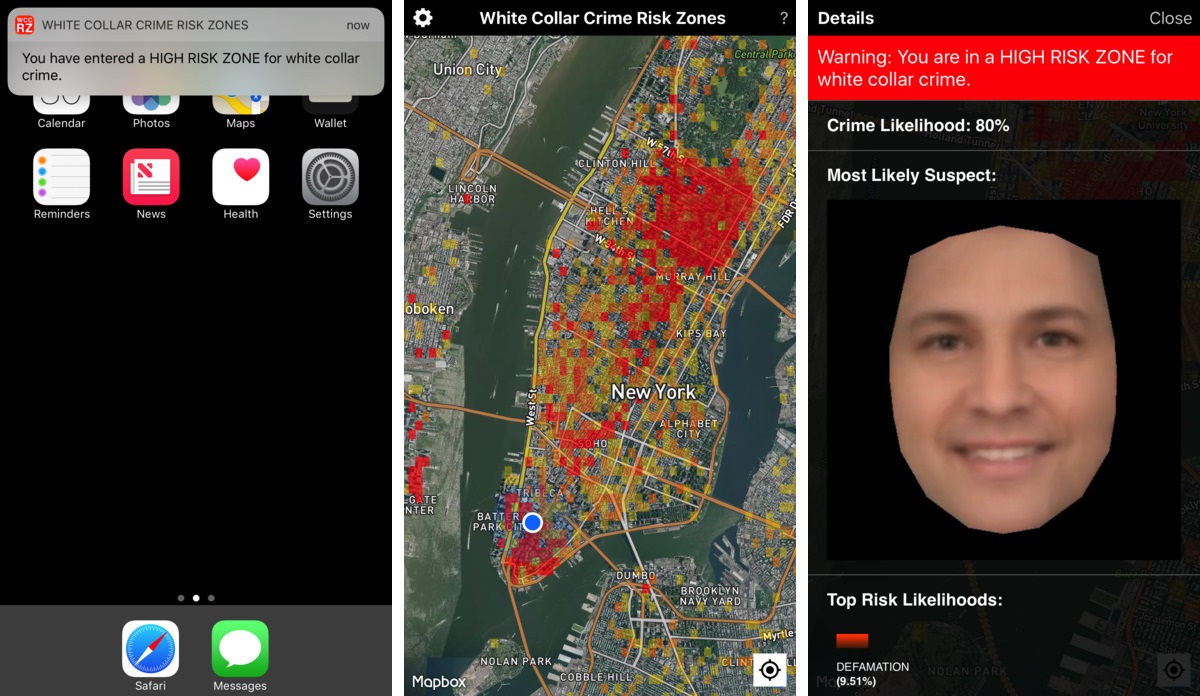 When you’re walking around urban areas, do you keep one eye open for fear of embezzlement, securities fraud and antitrust violations? Well, you can breathe easier, because a new app is here to use machine learning to help you predict whether or not a neighbourhood is likely to be at risk of such activities.

The White Collar Crime Risk Zone app is an interactive heat map based on crime statistics dating back to 1964, developed by journalists at New Inquiry magazine in an effort to illustrate the discrepancies in America’s law enforcement and prison systems, and the dangerous rise of predictive policing as a technology. The app also features headshots of CEOs, using them to compile images of what potential offenders could look like. 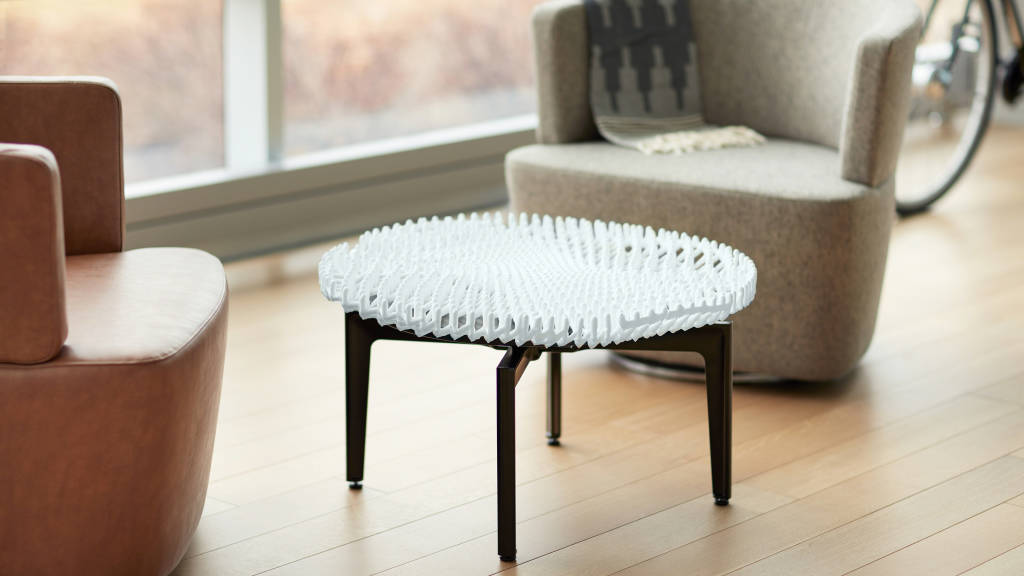 A collaboration between MIT’s Self-Assembly Lab, furniture creators Steelcase and award-winning product designer Christophe Guberan has resulted in a new 3D printing method that uses a rapid liquid printing technique to enhance speed, scale and quality and enable large items of furniture to be created in a matter of minutes.

Traditional 3D printing requires a support structure, layering and curing to create objects, resulting in slow, small-scale and often low-quality processes. The new project focused on improving speed, size and quality by printing inside a gel, which replaced the traditional support material and allowed product designers to draw in 3D space without the limitations of gravity.

A two-part mixing process then enabled the material to be chemically cured instead of using light or heat to set the structure. The finished method mixes, extrudes and cures all while the 3D printing is underway, and meant that a design that had previously taken 50 hours to produce could be made in as little as 10 minutes.