We continue our look at the winners of the 12th edition of the Effective Mobile Marketing Awards. Today we throw the spotlight on the winning entries in the Most Effective Influencer Campaign, Most Effective Messaging Campaign and Most Effective Anti-fraud Solution categories... 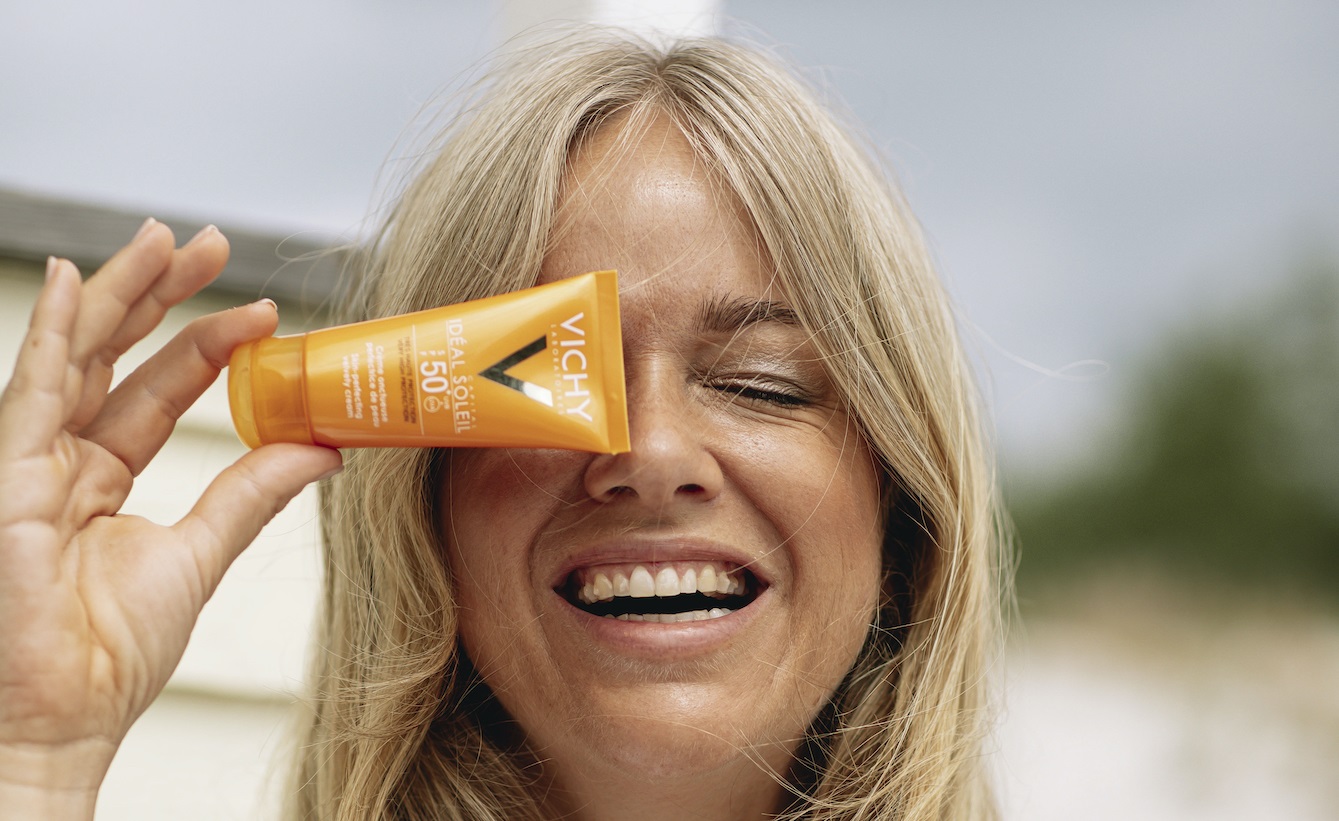 Although L’Oreal-owned Vichy boasted high brand recognition in Sweden, it was losing its share of voice and sales to competitors so needed to do more to engage its 35-50-year-old female audience. To do this, the brand wanted to convert awareness into purchase and establish Vichy’s credibility within the difficult-to-reach Pharmacy market as a purpose-driven medical brand with consumers’ needs at the heart. Just as the brand was about to cease all influencer activity due to a lack of success with other agencies, it came to Billion Dollar Boy (BDB) to deliver a first-of-its-kind 360 touchpoint campaign.

The goals of the campaign were to amplify Vichy as a relevant pharmacy skincare brand in Sweden; -partner with authentic brand advocates to endorse Vichy’s values and medical expertise; educate consumers on Vichy’s accredited anti-age franchises; and boost conversion by driving traffic to physical pharmacies store or eCommerce sites.

Selecting the right brand advocate would be key and research told the agency that when it comes to skincare, Nordic women preferred quality over quantity; like consistency; were loyal to good products in a routine; and preferred buying from Pharmacies due to stock selection and expert advice. Instead of multiple influencers, the agency chose one brand ambassador, Ebba Kleberg von Sydow, a journalist, TV presenter and mother, ensuring she had at least a 60 per cent local audience following to ensure maximum coverage and matched Vichy’s franchises. Alongside her, mid-tier influencers with a high engagement were used to help drive relevance and reach.

The always-on influencer strategy revolved around the power of routine in tackling signs of ageing, with Ebba advocating the relevant Vichy products and showing her skin transformation via social-first content during key activations throughout the year. When summer arrived, for example, she told audiences how to switch up their skincare routine to include stronger protection with the Capital Soleil range. This was communicated through Instagram and Blog posts.

The ambassador strategy was complemented with a targeted paid media plan to bring it back to sales and consideration. By taking influencer content and optimising it for ad usage on Facebook and Instagram, the campaign directly and cost-effectively targeted a larger and more specific audience. BDB used its own proprietary tech solution to approve, track performance and optimise content in real-time at all stages of the campaign, enhancing collaboration.

At the time of entry, the campaign had delivered 165 pieces of content; 83 paid pieces of content; 58 pieces of value-add content, showing Ebba using the products authentically; plus an estimated 1.3m Story views and 503,000 views of Ebba’s blog posts. In addition, featured products showed significant sales uplift.

A well thought-out and executed campaign, which more than delivered on its KPIs.

Judges’ View:
“A real example of influencer marketing optimized across channels to drive awareness through to sale. The team should be super proud of this campaign and its flawless execution.” 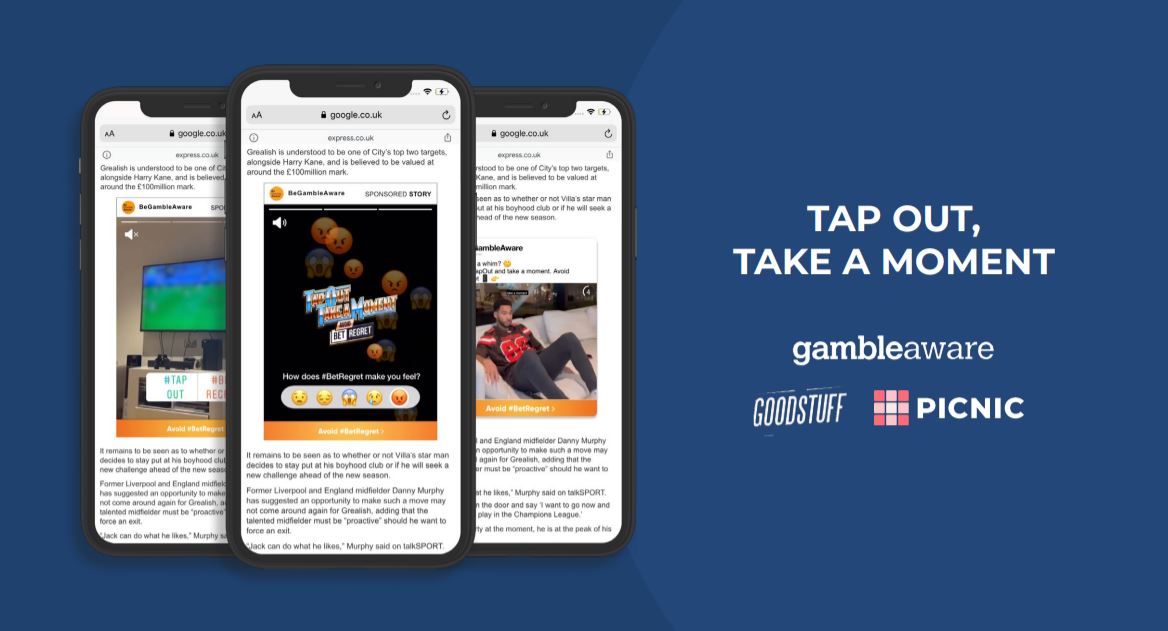 Statistics from GambleAware suggest that over 2m adults experience some form of gambling harm and that during lockdown, 20 per cent of gamblers have increased the amount they have gambled. So GambleAware launched a national public health campaign to drive awareness of ‘Bet Regret’, defined as ‘that sinking feeling you get the minute you make an impulsive bet, often when drunk, bored or chasing losses’. The campaign aims to encourage regular sports bettors to ‘tap out, take a moment’ to avoid risky or impulsive bets.

For the campaign Goodstuff aimed to engage with predominantly 18-34 year old males by disseminating football and boxing-related video assets in an engaging format in order to create an impact and enact a behaviour change in the target audience’s gambling habits.

To customise Stories and maximise user engagement Picnic overlayed social-inspired interactive features, including ‘emoji reactions’, which asked the audience ‘How does #BetRegret make you feel?’, and gave users an option of five tappable emoji faces to elicit an emotional response.

All ads were served on brand-safe premium editorial content with trusted publishers and relevant sports sites such as The Daily Mail Sport, Metro, SportBible and the Independent. When overlaid with sport-related keyword, demographic and Google audience targeting, the premium sites provided an ideal context to target relevant users scrolling news sites for sport results and news to inform their betting decisions.

The campaign smashed all expectations. Posts achieved over 8.5 second dwell time, and the Stories Emoji Reaction creative achieved a total engagement rate of 0.51 per cent, and generated an average of six emoji clicks per user.

The positive effects of this engagement for messaging effectiveness was evident in the campaign brand study results,

In a control and exposed study of over 8,000 participants carried out by VisualDNA, when asked ‘what messages do you think GambleAware as a brand tries to communicate?’ there was a 102 per cent uplift in users answering ‘GambleAware aims to prevent me from placing a bet that I may regret’ post-ad exposure. Additionally, when asked ‘which of these do you think GambleAware encourages?’ there was a 129 per cent increase in exposed users answering ‘pausing before I make bets in future’.
A strong, successful campaign, and one with a positive social purpose.

Judges’ View:
“An innovative creative approach with native placement and messaging along with contextual alignment with content. An effective way to target messaging around a sensitive and serious topic.” 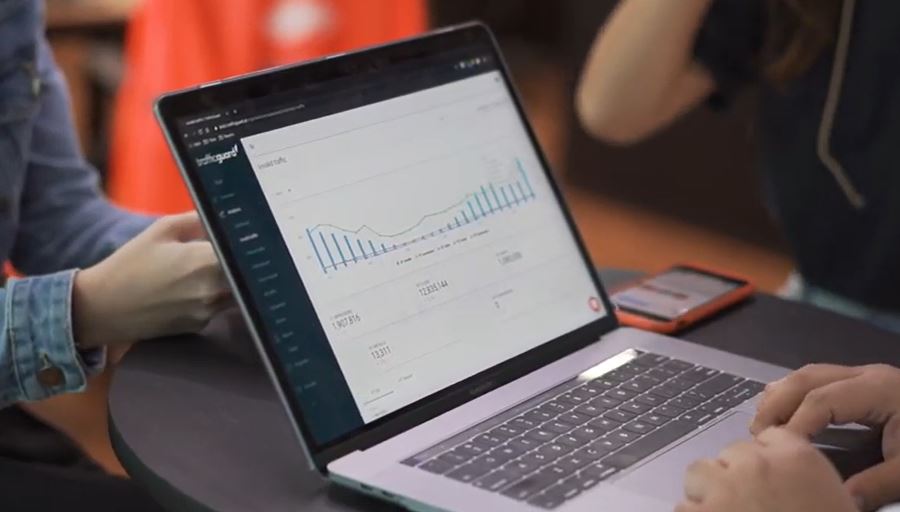 Juniper Research forecasts the total loss to mobile ad fraud to reach $87bn (£65bn) by 2022, with one in 10 installs coming from fraudulent sources. In addition to the lost ad spend, there are other costs, such as the revenue that the lost spend would have generated if it wasn’t consumed by invalid traffic (IVT). Also, misattribution has a snowball effect: IVT pollutes performance data, causing higher levels of misattribution of installs and events. These misattributed events inflate the value of the corresponding source not just by one conversion but by all the subsequent events of that converted user, misleading marketers to underinvest in channels that may actually be delivering results. It also leads to misdirection of efforts on factors such as conversion rate optimisation when the very data that guides them is skewed by IVT.

Most advertising verification happens at a single point in the advertising journey, typically at the attribution or impression-level. The problem here is that it leaves other stages exposed to IVT. TrafficGuard is a full-funnel ad measurement, verification and fraud prevention solution, offering real-time protection across impressions, clicks, installs and events. By verifying impressions, clicks and attribution, as they occur, TrafficGuard stops IVT as early as reliably detected. Ad fraud is constantly evolving and increasing in sophistication, making impression-level detection more difficult. The ability to track engagements beyond impression enables TrafficGuard to mitigate sophisticated IVT that evades early-stage detection, protecting the integrity of performance data.

Media spend is often distributed across a number of channels, each with its own measurement tool. But since TrafficGuard protects a range of campaign types, including CPI, CPE, CPM, PPC, etc., across search, performance and programmatic channels, businesses are equipped with comprehensive intelligence from across their advertising all in one place.

In the 12 months leading up to the submission of its entry, TrafficGuard had verified around 56bn transactions and invalidated over 9bn of them. Users of the solution include Ladbrokes, FindHotel, LeoVegas and LATAM super-app Rappi.

Rappi was faced with a number of challenges, including high and volatile click volumes; low conversion rates; and a growth team spending 30 per cent of its time on manual processes like install volume reconciliation for campaign optimisation. Since deploying TrafficGuard, an average of 25 per cent of clicks have been invalidated, with peaks of up to 40 per cent. Automated IVT prevention saves 30 per cent of time previously spent on manual analysis and install volume reconciliations. And advertising ROI has improved by 25 per cent. Additionally, the increase in genuine clicks has improved the conversion rate.

In a battle against an ever-evolving, sophisticated enemy, TrafficGuard is helping advertisers, agencies and the ad networks and partners they work with, fight a good fight.

Judges’ View:
“A brilliant, holistic, comprehensive solution that reacts dynamically to the equally dynamic bad actors it is fighting against.”

Tune in tomorrow when for our final profile, looking at the winners of the Most Effective Paid Social, Launch and App Install Campaign categories. You can also see all the winning campaigns on the Awards website.