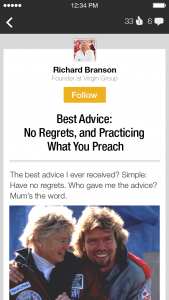 LinkedIn has slowly been building its ad business, which currently accounts for around 20 per cent of its revenue, and since introducing Sponsored Updates, a native-style unit that places content in users' feeds, it has seen native advertising grow to account for $63m in revenues during Q2 2015, 45 per cent of its total ad revenue.

According to Digiday, Sponsored Updates have become a popular choice for B2B firms looking to capture influential buyers within industries, and are well suited to mobile, where over half of LinkedIn's traffic now comes from.

For many years, business-focused social network LinkedIn was seen as a path of referral traffic for publishers, bringing readers from the professional platform to websites from links shared on the site.

However, referral traffic from LinkedIn to major publishers has dropped sharply and most of its audience is now reading content published on the service itself, following the integration of features from Pulse, a newsreader company it bought in April 2013, into the site.

With the growth of users consuming content on LinkedIn, the service has seen ad revenues steadily increasing as buying space on the platform was seen as increasingly appealing.

"Ultimately, LinkedIn wants to be a place where professionals come to further their business goals, become better at their jobs," said Russel Glass, head of products for LinkedIn Marketing Solutions. "Content and thought leadership as well as consumption is a critical part of those goals. It's a place professionals are coming to accomplish those goals and also where companies that want to get more promotion can do so."