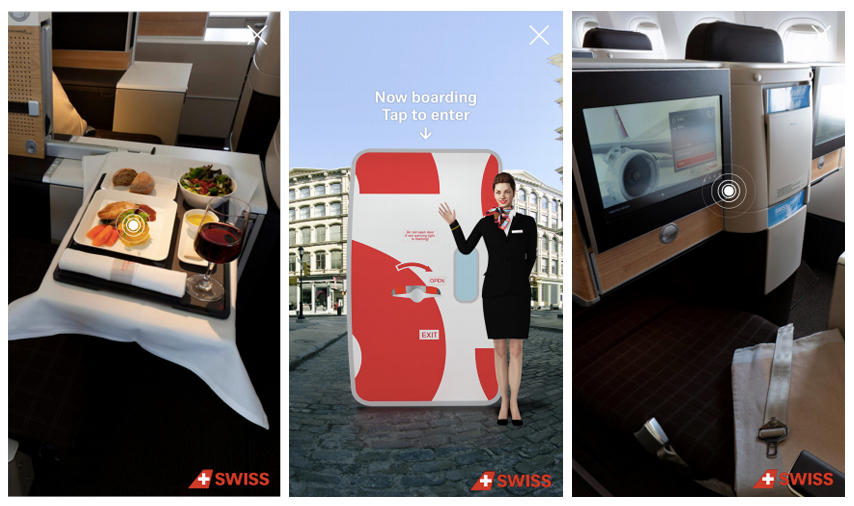 The mobile WebAR ad unit does not require audiences to download an app, and immediately plants a boarding door and flight attendant in the background of the users camera. Viewers can choose to board the flight, look around the Swiss Business cabin, and select information on amenities such as inflight catering and entertainment.

The ad campaign was created on the Google Marketing Platform and uses WebAR platform 8th Wall’s technology to implement the 360-degree video and AR experience. The WebAR platform also allows the developers to easily customize or edit the ad campaign, and optimize audience targeting. This technique resulted in increased brand safety and a higher amount of relevant content directed to audiences.

“We believe in making content that is meant to be experienced, not just consumed. Swiss International Air Lines is dedicated to bringing the highest level of product to their customers, just as they do in the skies, and really empowered our team to push the limits of what is possible for immersive technology in a mobile ad unit in this campaign," said Al Silvestri, Coffee Labs partner & CMO.

Mindshare associate director of Invention+ Zachary Freeman, “In a crowded digital landscape, it will never be enough for brands to just use new technology for technology’s sake. But this program uses web-based augmented reality and 360-degree video in a way that creates a true experience for consumers--not just something to be viewed, but remembered.”